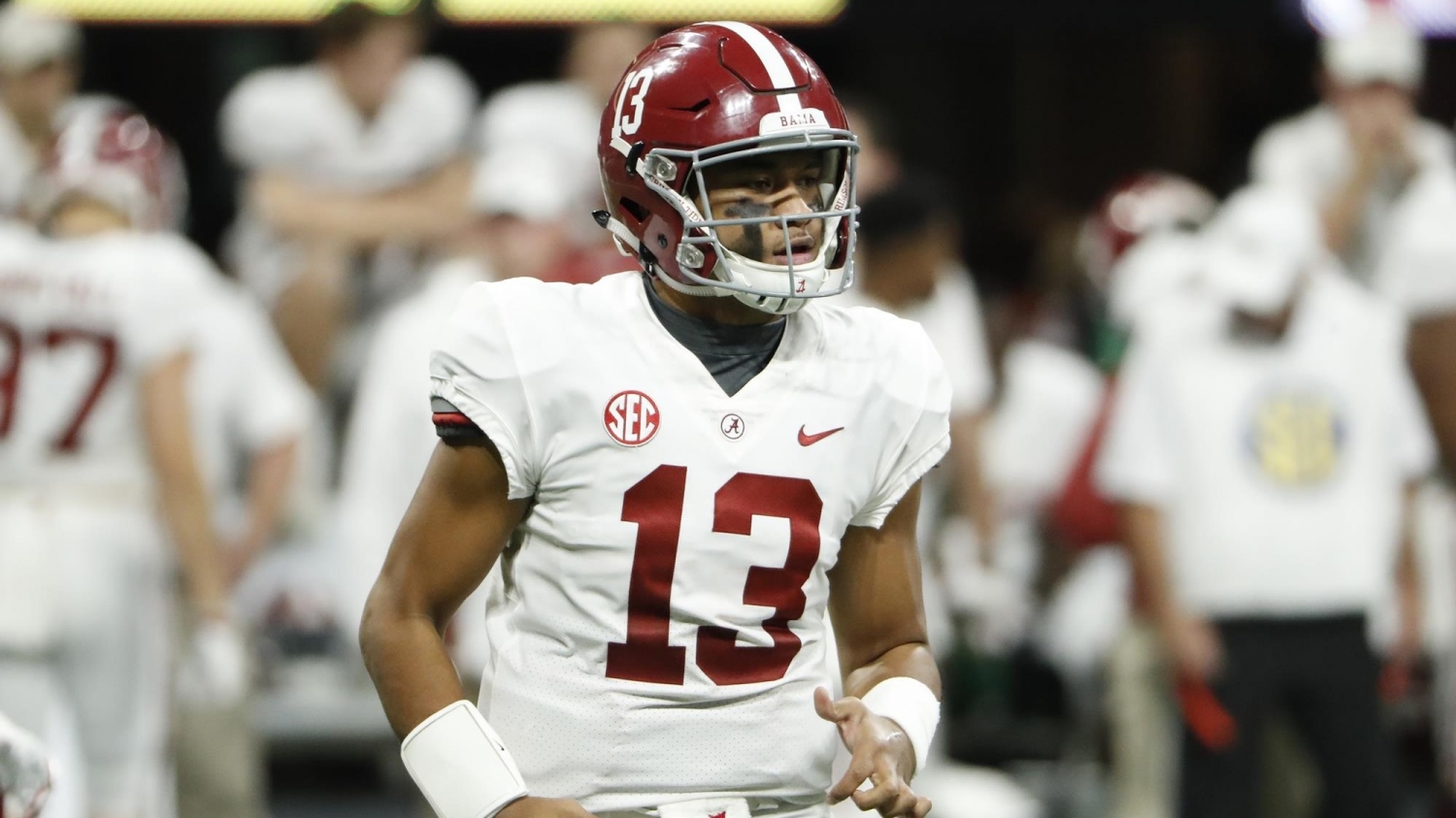 Now that the Miami Dolphins have drafted Tua Tagovailoa, the former Alabama superstar has the entire Dolphins fanbase reeling with either anticipation, or impatience. Given the circumstances, that’s an entirely understandable feeling. Miami hasn’t had hope for a true franchise quarterback since Ryan Tannehill was initially drafted back in 2012. The seven years he spent with the Dolphins made it clear that he’s good, but he will never be that elite level player fans want.

So now here comes Tua Tagovailoa. Perhaps the most talented quarterback to come out of college in recent memory. Many evaluators equate his skill set to Drew Brees. How could fans not want to see a left-handed Drew Brees come in as soon as possible? However, there are a few problems with that. While the temptation to play Tagovailoa right away is incredibly strong, is it really in the best interest of the franchise?

One can easily make the argument that patience is still a virtue. Here’s why.

“If the injury is from his hip, then I can only imagine that his body was compensating for that leg.”@ReggieBush reacts to Tua leaving the field with another injury, and shares his experience recovering from a similar injury as Tua’s high-ankle sprain from earlier this season. pic.twitter.com/PUzHrewUtS

One thing that cannot be dismissed or ignored is that Tagovailoa’s health is a huge question mark. His college career at Alabama is riddled with injuries that slowed him down, including the hip injury that officially ended his final season there. It’s because of that injury the Dolphins were able to draft Tagovailoa fifth overall in the 2020 NFL draft. It’s also because of that injury that caution is strongly advised. At the very least, head coach Brian Flores doesn’t seem to be in a hurry to throw him to the wolves.

“Look, we haven’t even seen him. Obviously with the pandemic and all that’s going on, our doctors haven’t seen him.” Flores said back in late April. “We have a long way to go before we can say who’s doing what … We have to just get him and have a meeting first. I think it’s way too early to speculate on this year and how this is going to go. You guys know we like to take a one day at a time approach anyway. That’s going to be the approach I’m going to have him take as well.”

Videos emerged before the draft of Tagovailoa going through the motions for a virtual Pro Day. He threw well, showed off strong footwork and revealed that his hip was progressing nicely. Doctors have come out and said that Tagovailoa’s hip is ahead of recovery schedule. All of these things are excellent signs. However, ahead of schedule does not mean fully healed, and we’ve seen what happens when Tagovailoa gets rushed out onto the field before he’s ready.

On Thursday, #Bama QB Tua Tagovailoa held a virtual Pro Day, with footage sent to all 32 teams. Here are some highlights 👇🏼👇🏼👇🏼 pic.twitter.com/KL9EjYiu5P

Take a look at the offensive line the Dolphins project to field in 2020.

This is merely an assumption based on what Miami seems intent on doing. Unless they sign veteran guard Larry Warford to play right guard, it’s obvious development is the goal for the upcoming season, one way or another. Kindley is a monster of a guard, Hunt loves pancaking defenders, and Jackson has all the tools necessary to be an elite left tackle. There are other young players who will get a chance as well.

But they’re raw. Every single one of them has some part of their game that needs serious fixing before they can truly be deemed ready to start in the NFL. Jackson’s hands and footwork needs to be fine-tuned. Hunt needs to move faster if he plans to play right tackle. Is it really wise to throw Tagovailoa out there when the offensive line is going to be using this season as a trial run? The obvious answer is no.

Again, temptation is very strong. It’s understandable that fans want to see Tagovailoa play as soon as possible. He represents the end of a long two decades of mediocrity. But without an offensive line worth touting, Miami runs the risk of ruining Tagovailoa the same way Tannehill was. No run game and no pass protection is a recipe for disaster for Tagovailoa’s career. Thankfully, there is a simple solution.

If Tagovailoa was going to start right away, why bother keeping Fitzpatrick around? Why bother investing in Josh Rosen and not seeking some sort of trade option to try and recoup the second round draft pick they gave up for him? The smart thing to do is to let Fitzpatrick be the crash test dummy so to speak. While the offensive linemen learn and grow through trial by fire, Tagovailoa can sit and watch Fitzpatrick, getting his reps through practice where the risk of re-injury is minimal. If something happens to Fitzpatrick, then Rosen can play instead, maybe even increasing his trade value.

Everyone knows Aaron Rodgers. He will go down in history as one of the greatest quarterbacks to ever play the game. But he didn’t play right away. He sat behind another Hall of Fame QB in Brett Favre for a while before he got to take over in Green Bay. Now, the Packers are following the same formula with extremely raw but talented Utah State QB Jordan Love.

Everyone knows Patrick Mahomes. He’s the best QB in the NFL. Some are already even crowning him the greatest of all time. But in his rookie season, he sat behind veteran Alex Smith. Granted, Smith was in the running for an MVP award that year. But as special as Mahomes obviously is, why did he not immediately take over?

Everyone knows Dan Marino. There’s no QB in Dolphins history who has accomplished more. There are many who consider him the greatest passer to ever play football. But even in his rookie season, Marino sat behind David Woodley for some time while he acclimated to the NFL. What came after that was more than a decade and a half of incredible play that leaves Dolphins fans constantly searching for that one player who can truly carry the baton for Marino.

25 years ago today, @DanMarino made his comeback after missing the last 11 games of the 1993 season 🔥 pic.twitter.com/EI1mTYCI0V

The list of QBs who found success waiting their turn goes on and on. Think of Carson Palmer sitting behind Jon Kitna for some time in Cincinnati. Eli Manning waited for his chance when Kurt Warner was a New York Giant. Philip Rivers didn’t make a name for himself in San Diego until after the departure of Drew Brees. Jimmy Garoppolo got traded to the 49ers while learning from Tom Brady in New England.

To be fair, there’s an argument in the opposite direction that can be made just as easily. Cam Newton started right away, as did Andrew Luck. Ben Roethlisberger only sat for one week before taking over for an injured Tommy Maddox. Matt Ryan, Russell Wilson, Carson Wentz, Deshaun Watson, the list goes on and on.

But there are extenuating circumstances when it comes to the case of Tua Tagovailoa.

The points made in this column are fairly easy to understand. So much is at stake with Tua Tagovailoa. As stated earlier, he represents the end of a long stretch of mediocrity. Miami has not been relevant since the days of Dan Marino, in spite of several tries to find his true successor. No one shows more promise in that regard than Tua Tagovailoa. But for this unique case, it’s best to err on the side of caution. Tagovailoa may not be fully healthy. His offensive line may not be reliable. His acclimation to the NFL may be hindered by factors beyond his control.

As tempting as it is to make him start now, that only satisfies the base urge to see the Dolphins be successful as soon as possible. It’s understandable, it’s relatable, but it’s not recommended at this time.

2021 is the year to truly get excited. Miami has two more first round picks that season. They have two more second round picks as well. Another strong free agency will only bolster the roster Tagovailoa comes in to play with. Add to that the draft picks the Dolphins select, and all systems are go from that moment on.

The future is indeed bright, the light is shining at the end of the tunnel. But they aren’t out just yet. One more season, Miami fans. The offensive line needs time to learn and gel, Tua Tagovailoa needs time to learn and heal. And the Dolphins have not one, but two quarterbacks who can easily step in while that process takes place. They have time to give. The wise thing to do is not risk the future for the sake of the present.

The NFL is a marathon, not a sprint.

THE EXTRA YARD: 5 Ways to Fix “The Rooney Rule”
Scroll to top