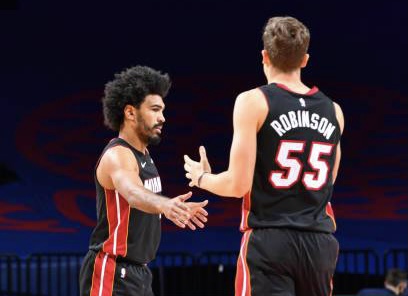 The Miami Heat is currently enjoying its best (and healthiest) stretch of basketball this season. They’ve won 12 of their last 18 games and appear poised to make up lost ground over the remaining 37 games. In the midst of finding a rhythm, a scintillating two-game stretch from Gabe Vincent has ignited an interesting debate among Heat fans:

Should Vincent continue to start at point guard, even when Kyle Lowry returns to the lineup?

Before setting the stage, we have to get one thing clear: shame on Lowry. The sole fact that this is even up for debate is an indictment on his tenure in Miami. Sure, there have been some good moments. But ultimately his impact has not lived up to the near $30 million yearly price tag it took to acquire him. Because of that, two-impressive games from Vincent against the Milwaukee Bucks’ JV team was all it took for fans to begin beating the drum. Let it be known that this discussion has much more to do with Lowry than it does with Vincent. Let’s proceed.

At face value, the Heat are an average team offensively. At least that’s what the numbers indicate. They are outscoring opponents by less than a point per 100 possessions (0.4) and it has them sitting in the 52nd percentile as a result.

With Lowry on the floor, the numbers get worse.

In nearly every advanced stat, Miami is a negative with Lowry and a positive with Vincent – both offensively and defensively.

That said, it would be naive to derive an opinion from solely looking at just one source of individual advanced stat. After all, injuries have forced Miami to trot out a plethora of different lineup combinations and taking a closer look could paint a better picture.

The Heat’s most-used lineup this season has been that of Lowry – Tyler Herro – Caleb Martin – Jimmy Butler – Bam Adebayo. This group has seen a total of 405 possessions together and has been solid in every way. They are outscoring teams by more than nine points per 100 possessions and forcing turnovers on 18.4% of opponents possessions. That’s like, really good. (It’s also an indicator on where Miami would be if they could just stay healthy).

Things get even more interesting if you substitute Vincent for Lowry with the rest of the group staying the same. Are you ready for these numbers? In Vincent’s 68 total possessions with the rest of Miami’s starters, the Heat are outscoring opponents by 23.5 points per 100 possessions and humming with a 61.1 eFG%. I know, it’s a very small sample size, but we’re here to have some fun, right?

It’s plain as day. Vincent has been more valuable to the Heat this season during his time on the floor per the numbers. Overreacting to a few good games and making drastic changes isn’t wise. But with Lowry continuing to operate on career-low efficiency and Miami flirting with play-in territory, they are running out of time to figure it out.

Vincent has the hot hand. His offensive spark is exactly what the Heat need to jumpstart their climb back to being one of the many juggernauts of the East.

And if one thing is true it’s this: Erik Spoelstra isn’t afraid to ride the hot hand. Just ask Duncan Robinson.

Bam Adebayo’s Aggression is the Key That Unlocks Miami’s Offens...
Scroll to top