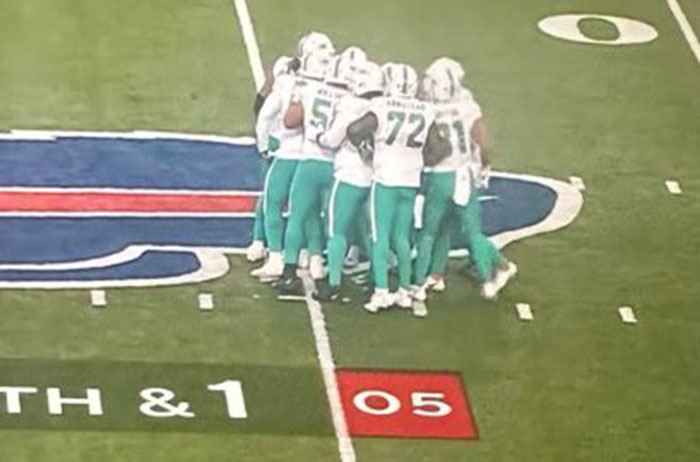 This is why they have playoffs, because there are no certainties in the NFL.

Not for the Los Angeles Chargers with a 27-0 lead, only to get swamped by an epic Jacksonville Jaguars comeback in a stunning 31-30 loss on Saturday.

For a while Sunday it looked like another Florida team might flip an improbable script with the Miami Dolphins turning a 17-0 deficit into a 24-20 lead, on the road with a third-string rookie quarterback against the highly favored Bills in their AFC wild-card game.

Ultimately, there was no Miami Miracle in Buffalo as what could have been the Dolphins’ greatest postseason comeback victory fell short 34-31.

While the effort and the scare they put into a bonafide Super Bowl contender was commendable, the ending was wrenching in a way that is characteristic of a franchise that never fails to string along its fans and leave them in agony.

This one will be remembered for the Dolphins’ final hopes fizzling after a delay-of-game penalty on fourth-and-short in the final two-and-a-half minutes.

For all the good first-year coach Mike McDaniel did in getting the team to the playoffs for the first time in six years and within a whisker of upsetting a 14-point favorite, he will have to endure an offseason of bitter taste from questionable game management in the fourth quarter.

McDaniel repeatedly had trouble getting plays in to quarterback Skylar Thompson and the proper personnel package on the field in timely fashion. They had already burned all of their timeouts because of that issue.

This time there was no way to avoid the penalty. They were still in the huddle with five seconds left on the play clock.

So they went from needing less than a yard to fourth and a long five with 2:29 remaining.

That was just terrible awareness by the Dolphins and it falls on your head coach. Can’t happen in a spot like that. They’ve struggled all game getting plays in and to the line. But in that spot on 4th and 1 it’s inexcusable.

On what would be Miami’s final offensive play, Thompson either didn’t see Tyreek Hill streaking open across the middle or the rush was on him too quick to make that throw. So Thompson looked to the right and was unable to connect with Mike Gesicki on a short pass. And that was that.

McDaniel said afterward that there was confusion with the officials on whether Salvon Ahmed had actually gotten the first down on the previous play.

“We thought we got the first down, so we were deploying some players for the first-and-10. And then it was articulated that it was fourth down,” McDaniel said in his postgame media session.

That was definitely a time when one of those previously squandered timeouts would have come in handy.

Whatever the reason, it made for an excruciating ending as the wind rushed out of the Dolphins’ season with a massive Pffft!

Efficiency in getting plays in and off is certainly an area for improvement as the Dolphins have often pushed the play clock to the final seconds this season. It became more of an issue Sunday with a rookie quarterback contending with a loud, hostile crowd.

This is absolutely pathetic!!! I’d be irate if I was a Dolphins fans!

Dolphins 0-for-4 since last playoff win

Bottom line, the Dolphins were one-and-done in the playoffs for the fourth time since they last won in the postseason 22 years ago.

They gave a much better accounting of themselves than in the previous three which were all routs by a combined score of 77-24.

It appeared like it would more of the same with Josh Allen and the Bills leading 17-0 early in the second quarter.

Turnovers had a lot to do with the arc of this game and everything to do with the Dolphins making a contest of it. Miami cashed in 18 points off three turnovers.
Allen came in with 14 touchdown passes and only one interception in his playoff career.

The Dolphins picked him off twice in the second quarter and forced him into a fumble that defensive lineman Zach Sieler scooped up for a go-ahead touchdown early in the third quarter.

The Bills regained the lead after converting a Thompson interception into a short touchdown drive.

But Thompson led an 11-play, 75-yard touchdown drive to bring Miami within three points with 10:53 remaining.

Thompson ended up completing 18 of 45 for 220 yards and one touchdown, with two interceptions and a passer rating of 44.7.

The rookie was often off target and slow getting passes off. But he didn’t get great help from his receivers, who had several notable drops.

Jaylen Waddle, in particular, looked like he was trying to catch a pot roast slipping off a greased platter with oven mitts until finally coming through with three catches in the fourth quarter.

Damar Hamlin, the Bills safety who needed to be resuscitated on the field in Cincinnati two weeks ago, watched on TV and tweeted following the game: “I have to give a huge shout out to the Dolphins. Made it a game. I’m so looking forward to more Bills Dolphins in the foreseeable future.”

Yes, the Dolphins bucked steep odds and made it closer than most of their fans may have hoped for. But the way it turned out left them feeling frustrated with the many mistakes, angry about the disorganization in game management and lamenting how the outcome could have been different with starting quarterback Tua Tagovailoa a healthy participant.

Unfortunately, health and availability has been elusive with Tagovailoa. Recurring concussions have put his long-term viability in question — the most recent head injury kept him out of the final two games of the regular season and the playoff.

Adam Schefter, of ESPN, reported Sunday that Tagovailoa “is expected to return as the Dolphins starting quarterback next season” and that he might have been cleared from concussion protocol had the Dolphins advanced in the postseason.

According to Schefter: “Medical professionals also are confident that Tagovailoa should be able to resume his NFL career next season, if not sooner, sources said.”

Like the outcome of Sunday’s game, that is just another uncertainty in the Miami Dolphins’ unending seasons of elusive hope.