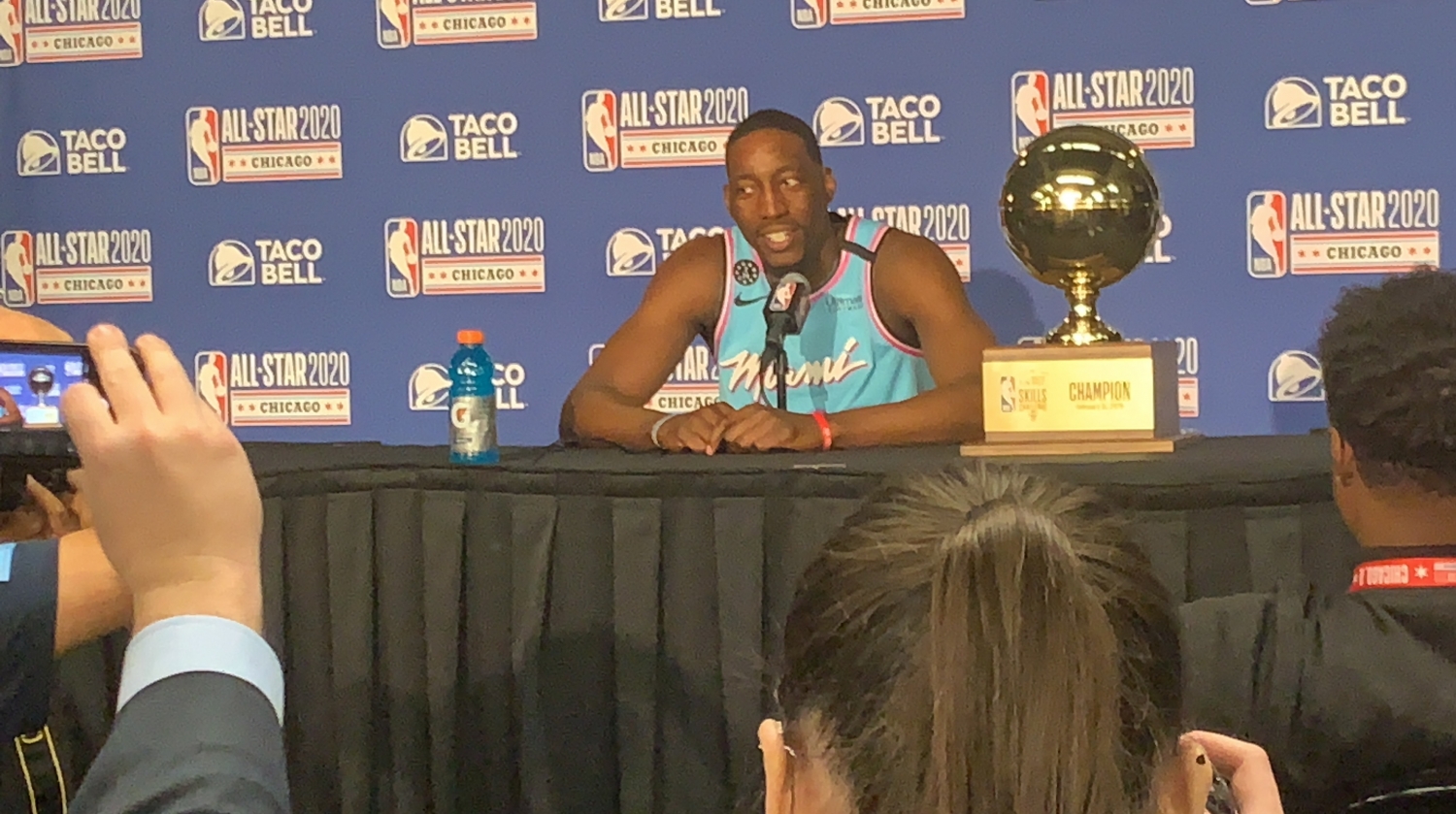 It isn’t our intention here to call more attention to the national media ignoramuses, even if it is tempting to directly illustrate their ignorance. So the radio blowhard, the one based in and obsessed with Los Angeles, the one who apparently didn’t know Bam Adebayo’s name back on October 5, 2018, shall not be named.

Colin Cowherd not knowing who Bam Adebayo is:

1. Unacceptable for someone hosting a national show.
2. Not surprising at all.

But this isn’t about that guy anyway.

It’s about the Miami Heat’s first-round pick in 2017, the one they likely wouldn’t have been in position to acquire if they had done the right thing by Dwyane Wade in 2016; the one whom they privately described on draft night as the “anti-Hassan” in comparison to the numbers-before-team big man they had unfortunately re-signed to a max; the one they researched more thoroughly than any previous draft prospect without finding a single red flag; the one many Heat fans didn’t want at the time but was anointed by the Heat’s historical frontcourt royalty as the next to carry the franchise tradition; the one that the fickle, unforgiving Jimmy Butler tells associates is “the best teammate I’ve ever had.”

The one who is now a certified All-Star.

And needs to believe he can be more.

There was so much symbolism at the someday-to-be-renamed American Airlines Arena on February 22nd that some statements slipped under the radar. There was Wade, the franchise icon, the representation of all the struggle and success that comes with carrying that burden, sitting at the podium in the interview room in the bowels of the building, while Bam Adebayo — still only a few months older than when Wade entered the NBA — was absolutely wrecking the poor Cavaliers on the floor, sinking his first seven shots in a rout.

Wade didn’t watch the first half (why would he?) but he has known about Adebayo’s potential before rejoining the Heat in 2018 and becoming his teammate for a season-and-a-half. But at the time, Adebayo was blocked by the pouting presence of Hassan Whiteside, with the Heat wary of removing Whiteside from the starting lineup too soon, for fear of losing the max player’s interest entirely. So this Adebayo is different. And now different questions are being asked.

Not whether Bam’s ready to be a full-time starter. He’s proven it. All his metrics are better with more minutes.

Not whether he’s unique and special. We sensed that. Now we know that.

But whether he can be next.

Whether he can be Wade, in a sense.

And so, yes, the symbolism.

Wade revealed during that press conference that on his path to the court, he turned to Zaire, the one who wants to follow in his family footsteps, the one who is playing prep ball in California, and said to his son simply:

“I’m getting out of your way now.”

He’s out of Bam’s way now too.

In the Heat family.

But a worthy successor, possibly.

“One thing about today’s society, you can reach out to anybody and talk to them,” Wade said at that same presser. “I found myself a few times being that older veteran guy who reached out to people and being like, ‘No, don’t do that.’ Or just giving them advice. But someone like Bam, man, right away when I got back to Miami, I knew, you could feel he was special. He’s a special person, right? Basketball, the sky’s the limit for him. As I continue to say, we set a bar. My points, my assists, was a bar that set before me, it was set by Alonzo, it was set by Tim Hardaway, it was set by the greats before me. And that’s all I’ve done. I’ve just set a bar. And I told Bam a couple of weeks ago, before he got announced to the All-Star Game, go take it, go do it, go set a bar for the next kid, and the next child. He may not even be born yet. But continue to set bars….”

When Wade left in 2016, under those unfortunate circumstances, there was no one here to grab the baton. Waiters? Whiteside? TJ? JJ? No way. Now, though, there is. And it’s not Wade’s Marquette buddy, as exemplary as Butler has behaved with the Heat. Butler is 30. He has shown in his six months here that if you care about winning, he cares about you, and you could argue that no one outside of Adebayo’s beloved mother has been more supportive of the 22-year-old, pushing Bam to fulfill his potential, ceding his own standing in similar fashion to what Wade and Chris Bosh did to allow LeBron James to become the best version of himself — even more remarkable when considering what James was when he came here, and how comparatively little Adebayo had accomplished prior to this season. But Butler’s reputation is bruised. The players voting him sixth among frontcourt players, behind Adebayo, was further proof of that. The perception may not be reality, but it exists. For that reason alone, he’s not the ideal heir to Wade in terms of one of Wade’s most important roles: serving as the smiling face of the franchise, the chief recruiter, the one who draws others in.

Over a full season, the only players in NBA history to have recorded this, per @bball_ref:

It is obvious after every game, with every embrace of an opponent, with those rivals approaching him to share kind words and easy laughs. Pat Riley may have abhorred this fraternization when he was a coach, putting restrictions even on the closest friends (recall Alonzo Mourning and Patrick Ewing?) but it is ideal for his ambitions now. Prized 2021 target Giannis Antetokounmpo, in true Riley style, is against offseason workouts with other stars, turning them down with LeBron James and Carmelo Anthony, among others. But he works out with Adebayo. Same agent? Sure. But that will assist too.

Giannis with praise for Bam, Spoelstra after Bucks loss to Heat @5ReasonsSports pic.twitter.com/Gg5FrA9BVE

So he is the face now.

It’s OK for that face to growl a bit more, like Zo’s did.

It’s OK, when you’ve established your unselfishness, to step into a jumper like Chris Bosh did, even when Wade and James were open.

It’s OK, when everyone knows your motives are pure, to call out others like Udonis Haslem has, for nearly two decades.

And not to wait anymore.

What stood out about Bam Adebayo’s All-Star weekend?

Winning the Skills competition, beating two other bigs (including closest clone Pascal Siakam and potential playoff opponent Domantas Sabonis) and a guard who had won that title before (Spencer Dinwiddie)?

Not the performance, as remarkable as that was.

It was the press conference.

He had seen on Twitter that no one really believed he could win the competition — well no but the Heat fans who jumped on the outlandish odds. It was like Vegas had set the number based on the rantings of uninformed radio hosts who are fixated on Alex Caruso rather than centers averaging six assists per outing.

And he let them know.

Bam Adebayo has the worst odds (+1200) to win the Skills competition.

This is the Bam the Heat need.

The defiant Bam. The emboldened Bam. Even the little-bit-irritated Bam.

The one who “felt great to prove a lot of people wrong” in winning the skills competition.

The one who realized late in the All-Star Game, as he looked down the bench, that “I’m an All-Star.”

The one who later announced that he expected to return for many future weekends.

“Yes,” he said. “I have high confidence in myself that I will be back… and my teammate Jimmy.”

He has high confidence, for sure. He couldn’t be here without it.

But he also has a modesty that, while quite becoming, is also becoming less necessary.

At the end of what had been Wade’s night, in the locker room Wade ruled for so long, Adebayo spoke about his conversations with Wade in “little brother” terms, the kid who keeps it light, respectful of his elders, the clown to keep them young.

Some reality, however, was required.

In the past year-plus, Alonzo Mourning, Chris Bosh and Udonis Haslem — along with Wade — have identified Adebayo as the ideal culture-bearer, even when fans had yet to view him that way.

Bam blushed, laughed and turned his kid when reminded of this.

“Bam, at this point, Zo called you the next one, UD said he was passing the mantle to you, Bosh has said it, Dwyane has said it,” was the statement, er, question. “This is like the Mount Rushmore of the Miami Heat. At some point, are you no longer the kid, and are you the guy?”

“Uh,” Adebayo said. “Yeah, I’ll take that. I’ll be the guy. I’ll take that on my shoulders. Since Mount Rushmore, Miami Heat Hall of Famers saying it.”

Then he got serious.

“But they see something in me. And that’s the thing. It hasn’t hit me yet. Like, it hasn’t hit me that I’ve been to an All-Star Game, and all the work I’ve (done to get) to this point. It really hasn’t me. Just cherishing those moments and hearing those wise words from those guys. It’s a beautiful thing for me. Just for them to show their support and how much they believe in me.”

Once February turned to March, and it became just about the season, and this team, his team, Bam Adebayo was asked again in a quiet locker room moment about the All-Star experience.

And how it changed his view of himself.

“Just because you’re in the room with a group of All-Stars, like superstars,” Adebayo said. “So you do, you do get an extra, extra energy about yourself. And your confidence kind of shoots up, because you’re like, you look around, and it’s like, ‘I’m an All-Star too!’ So it’s kind of like, wow, why can’t I be one of the top tier players in the league.”

Was there a pinch me moment?

“A.I.,” Adebayo said of Allen Iverson. “A.I. had a conversation with me. And he knew who I was. And coming from a guy like A.I. who changed the game. You just kind of think, ‘You know who I am?’ I mean, Charles Barkley gets paid to know who we are. But A.I. doesn’t get paid to know who Bam Adebayo is. That’s just real. And just for him to come up to me and give me advice and tell me to keep working was a big pinch me moment.”

Maybe the radio hosts don’t know, as they harp on Kyle Kuzma’s hair.

But The Answer does.

So what’s the answer?

Whatever he believes he is.

Ethan J. Skolnick has covered the Miami Heat since 1996 and now hosts the Five on the Floor podcast and runs the Five Reasons Sports Network.

What Happened to the Florida Panthers?
Scroll to top