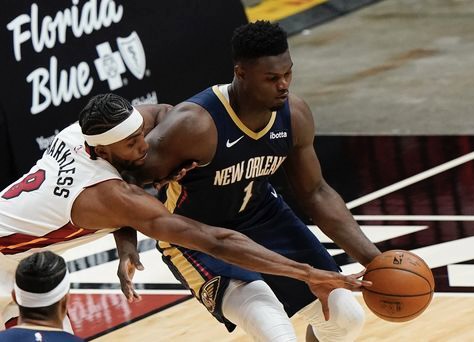 The fate of the Pelicans rests on Zion Williamson’s plate. To protect themselves from their star player eating himself out of the league, NOLA will periodically weigh him to ensure he doesn’t exceed 295 pounds. Although, with the threshold being such a high number, they are giving Williamson a large amount of waist room.

Yet, there’s no word on Williamson guaranteed money getting touched if he misses a certain amount of games. When I asked the Pelicans about it, they did not want to provide any other information about his contract, including how the 295-pound threshold was reached by both parties, how much Williamson is weighing now and what they’d prefer his measurements on the scale to be.

However, #1 is committed to getting slimmer after missing an entire season (2021/2022) with a foot injury. He has employed the services of a new personal chef who works with other athletes. But it’s the least he could do after reportedly showing up last year weighing 330 pounds.

It’s news to me that a professional athlete couldn’t stay in shape when going through an injury to his extremities as he was surrounded by some of the best trainers and nutritionists in the world.

Williamson and his camp should be elated that the only thing affecting his guaranteed money is something he can control. Given the explosive nature of his game, it’s reasonable to believe that lowering his density would alleviate some of the pressure on his joints, ligaments, bones and muscles when coming down.

Williamson is legit. But he hasn’t done anything to deserve such a commitment from his team when he’s only played in 85 regular season games in three seasons. For the Pelicans to take the next step into contention after making their first Playoffs since 2018, Williamson will have to rewrite the narrative on his availability.

New Orleans valiantly challenged Phoenix through six games in round one before defeat. Despite a short trip to the postseason, the prospects of NOLA having a bright future were as clear as the Weddell Sea because of how much they pushed the Suns without Williamson on deck.

Hypothetically, the series against the West’s top-seeded team would have transpired differently with #1 suited up. Perhaps New Orleans still gets taken out, but what is certain is the defensive strategy the Suns used would have been altered with Williamson on the floor because of the mismatches he creates.

Replacing Jackson Hayes for a healthy Williamson in the starting lineup would have given the Pelicans four players with the ability to create their own shot to open a game. If that many players can get a bucket on their own, it limits an opponent’s capacity to send help effectively.

About 70% of Williamson’s field goal attempts come from within three feet of the hoop, and it’s usually a surprise when he fails to convert from close range. He is a danger to the rim and commands a double or trap near the paint with the ball in his hands in the halfcourt. That type of attention from the defense will make sure another Pelican will get open on the opposing baseline or perimeter.

An effective tactic to deploy when Williamson returns this upcoming season is using him more as the roll man after a screen. In 2021, his PNR frequency was only 5.2%, scoring 1.4 points per game on those possessions. The screener always gets open if the man he roadblocked is trying to ice the ball handler. Williamson would have a short window to receive the ball and dash toward the cup. If his man is low defending the lane, he can attack the protection by taking a shot from up to 16 feet away or attempt to go through him to force the foul.

Williamson not getting enough action in PNR is a coaching crime that falls on the shoulders of Stan Van Gundy and Alvin Gentry, aside from their inability to keep him in shape.

Fortunately for the Pelicans, coach Willie Green managed to direct his squad into the postseason when the chances of it happening were slimmer than a straight razor to start the campaign. Such an accomplishment adds credibility to Green because snatching the eighth seed indicated the Pelicans were farther along in their development than expected.

Adding Williamson to this group could make New Orleans one of the dark horse teams in the West. They already have two three-level scorers in Brandon Ingram and CJ McCollum, plus a shutdown perimeter defender in Herb Jones. Inserting a skywalker like Williamson around those guys is a luxury not many teams can say they have.

But none of it will mean anything If NOLA’s first overall pick can’t get on the floor. The investment to build a compatible team around him is too large for the Pelicans to fail.

The Life and Times of Sebastian Vettel | Hitting the Apex