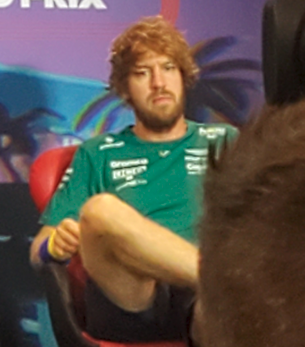 For older McLaren fans, in particular those who are veterans of the battles of the early 2010s which saw Red Bull transform from plucky energy drink company to Formula 1 dominance coinciding with a McLaren backslide into the midfield, it’s hard to identify the epiphanic moment.

That chill that runs down the spine, causing the whole body to shiver.

The realization that you like and admire Sebastian Vettel.

The 4-time World Champion announced his retirement this week. And his career spanning more than a decade illustrates the power of sports and the platform it provides to reach a higher calling outside of the race track.

Vettel’s journey from Wunderkind to Elder Statesman saw the German achieve much more when he was no longer winning races than he ever did by lifting trophies.

Sebastian Vettel was born to be a race car driver. He started karting at the age of 3 and quickly ascended up the racing totem pole, finally becoming a full-time Formula 1 driver with the Toro Rosso racing team.

And he took the sport by storm, fast from the beginning. He also earned the reputation as impetuous, foolish, too young to win a championship. And despite being the youngest driver in F1 history to win a race, there was still healthy skepticism about his ability to be a world champion.

For much of the 2010 season, that skepticism seemed valid as Vettel adjusted to the Red Bull team he had joined. Vettel was the fastest driver, but several retirements and mistakes, most notably crashing into his teammate Mark Webber in Turkey, seemed to have gifted the championship to Fernando Alonso. With 2 races to go, Vettel needed to win both to have any shot at the title. He accomplished the first half of that in Brazil. In the season ending Abu Dhabi Grand Prix, Vettel not only needed to win, he needed a minor miracle.

You ask for a miracle? I give you Ferrari.

All Ferrari’s Fernando Alonso needed to do was finish 2nd to win the championship, and Top 4 would be enough to prevent Vettel from winning his first title.

Enter Ferrari strategy. They pitted Alonso early to cover off Mark Webber, who had only pitted early because of damage. By doing so, Ferrari undercut themselves out of the race, spending the race stuck behind a Renault and finishing 7th. Vettel won the race and the championship, becoming the youngest champion in Formula 1 history.

The Wunderkind had delivered on his promise.

Over the next 3 years as part of winning 4 consecutive titles, Vettel transformed from young gun to veteran, from exciting prospect to part of the scenery. We started to take his brilliance for granted. The age old detraction of “anyone can win in that car” was bandied about.

But anyone didn’t win in that car. Vettel did.

For fans of teams that weren’t Red Bull, this period was vexing. An energy drink company is not supposed to put a kid in a car and beat teams with the tradition of McLaren, Ferrari, and Williams.

Which was why what happened next was so shocking. Vettel had been with the Red Bull program since he was a junior driver. But after one bad 2014 season, he left. It’s hard to know what precipitated the divorce, but Red Bull had their next young leader in Daniel Ricciardo, and Vettel wanted the challenge of Ferrari.

The End of an Era

What had actually happened in 2014 was not Vettel’s fault. Red Bull had become so accustomed to winning, they, and really all of Formula 1, was not prepared for the era of dominance Mercedes was about to unleash. Mercedes would win the next 7 Drivers Championships until last year’s controversial Max Verstappen win.

And when history retells this tale of Mercedes’ dominance, it’ll talk about the one Nico Rosberg title, and Lewis Hamilton’s ascension into the greatest driver in Formula 1 history. It will be glossed over as a time when no one challenged Mercedes.

But that isn’t true. Because Vettel did.

The 2018 season will look in the history books like one that is non-competitive. Hamilton won the championship by 88 points. But he was not in the lead at the halfway mark. This was a season where Vettel pushed Hamilton to his limit. The reason Hamilton is the greatest driver in Formula 1 history is that when pushed to his limit, he found another gear, reaching a crescendo in one of the best qualifying laps in Formula 1 history which saw him take pole and win the race at a “Ferrari” track in Singapore.

This was Hamilton at the height of his powers, and there was Vettel, pushing him all the way.

Which is why once again it was so shocking that merely one season later, Ferrari unceremoniously announced that Vettel would not continue after the upcoming 2020 season. Once again, Vettel, with so much left to offer his team, was on the move.

This time there was no race winning car in his future, but Aston Martin beckoned.

No, it was not the on track aspect. You see, while Sebastian Vettel was born to be a race car driver, his actual calling in life is humanitarian. And Formula 1 provided him the platform to become the champion of the downtrodden, the discriminated against, the marginalized people who have no voice.

While our current era of athletes are almost preprogrammed to give rote answers about any social or marginally controversial issue, Vettel seeks out the limelight precisely to highlight those issues, and to take a side. The side he chooses to take is the one of righteousness, of humanity, of putting others in front of his personal brand.

It’s with a sense of irony that Vettel announced his retirement the week of the Hungarian Grand Prix as he returns to the scene of where he famously wore rainbow colored shoes in protest of anti-LGBTQ+ discrimination laws in Hungary. For a marginalized community in Hungary legitimately living in fear of discrimination and much worse, Vettel provided a beacon of hope.

He has been at the forefront of supporting Lewis Hamilton in the fight against racism, to the point that the once furious rivals are now close friends.

Vettel is not afraid to be out in front. He’s used to leading the pack. And it is fitting that as former 3-time World Champion Nelson Piquet gave everyone a window into his racism, Vettel continues to show the world what a real champion is. In a cover piece for a LGBTQ+ magazine attitude that was released almost simultaneous to Piquet being banned from the Formula 1 paddock for repeated racial and homophobic slurs, Vettel said:

That is the essence of Sebastian Vettel, the man. Formula 1 is losing so much more than a fast race car driver when Vettel exits the sport. I’m under no illusion that this Aston Martin car can win a race, that we’ll see Vettel ascend to that top step of the podium one more time, that we’ll see him showered in champagne.

However, what we’ve witnessed is far greater than that. We’ve seen Vettel ascend to the top step of the podium of life. From Wunderkind to humanitarian, from petulant to role model, from driver to legend.

It will be impossible to write the history of Formula 1 without Sebastian Vettel. His quality as a race car driver saw to that.

But his impact off the track, his shifting of our expectations of how we expect a driver to conduct himself, his willingness to step out front and lead on issues that were not spoken about previously, providing support to those who need it most, will echo through eternity.

Formula 1 will lose Sebastian Vettel as a driver in 10 more races.

Vishnu Parasuraman is a contributor for @FiveReasonsSports. He covers the Miami Hurricanes  for Sixth Ring Canes and Formula 1 for Hitting the Apex. You can follow him on twitter @vrp2003

What Matthew Tkachuk brings to the Florida Panthers