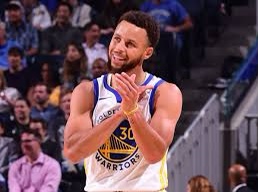 People like Stephen Curry come around once in a lifetime.  Today no one in the NBA puts more pressure on a defense with their arsenal than #30.  He is a marksman that can never be replicated. And likely a demi-god among us mortals.

When Curry sat at the post-game podium, the first question he got was how it felt to win his first Finals MVP.  He told the reporter to forget about it because he and his teammates were now champions.

Someone was going to inquire about the award media “experts” had made such a fuss about Curry not having.  As if it somehow subtracted from his eminence that it was missing from his oversized trophy cabinet when it’s just a prize for a series.

His response told you everything you’d need to know about him as a teammate.  He could have reflected on his achievement, but that didn’t matter to him.  Winning his fourth meant something different than the rest.

No surprise there.  Curry is a compulsive winner who experienced two years of postseason withdrawals because of injuries to him and other members of his outfit.  He reminded reporters and everyone watching live how many days it had been since the Warriors were last sent home- a year and six days.

Yet, it was three seasons ago when Golden State last got a sniff of the Larry O’Brien Trophy.  Coming off five straight trips to the Finals is usually the last amount of juice the finest dynasties can squeeze out of a run.  The Warriors were stubborn enough to finish their late encore.

In the first half of the series, Golden State lost two of the first three and still needed to play a fourth match on the road.  In Game 4, Curry scored 43 points coming off screens, attacking in transition and slicing through the paint.  Three nights later in San Francisco, Andrew Wiggins stepped up, leading the Dubs in scoring to take a 3-2 lead, sending the series back to Boston.

The Celtics couldn’t climb out of their ditch because they kept dropping while defending the pick ‘n’ roll and were ineffective hunting Curry. When #30 turned the corner of screens, Boston gave up enough space outside while covering the drive to the basket. The Celtics also shot 37% from the field with Steph as their matchup on 80 attempts, per NBA Stats. He was a two-way star.  Much to Boston’s surprise and that of part-time observers who still ignorantly believe Curry is the same player defensively he was seven years ago.

Additionally, the Celtics’ short bench eventually bit their tail.  They relied upon seven guys for heavy minutes in the series.  Their legs were dead.

Through the Warriors’ run, Curry scored 602 playoff points, with 187 of those coming in the Finals.  It was the most he logged against the club’s four opponents and the highest output he’s had in the championship round, per basketball reference.

All this jewelry Curry has racked up winning in his career has elevated his street cred to heights only men recognized on a first-name basis understand. I’m not here to say whether or not he is better than any of those guys.  But he’s one of them now.  If Curry were to wear all of that bling in broad daylight, the sunshine reflecting on his ice could blind a bystander if he’s not careful.

Sign up for PrizePicks.com using the code “five” and get your initial deposit matched up to $100.

Miami Heat 2022 Draft Board, with Historical Comparisons
Scroll to top