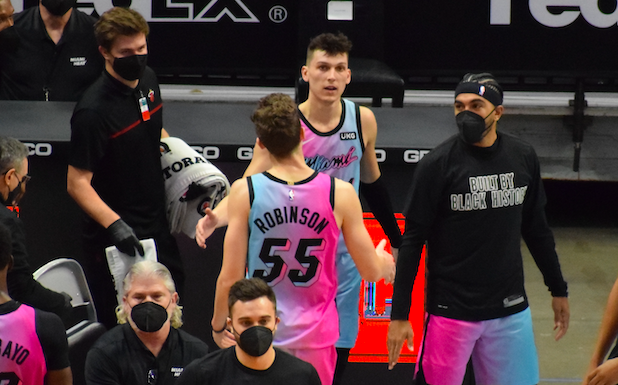 The Miami Heat has really struggled this season. On Tuesday night, against the Knicks, it wasn’t different.

Jimmy Butler is back, is his best version, aggressive, leading the team, and on Tuesday, it was him all over again. A +25 that almost ended up in a loss, believe it or not.

That’s how bad the second unit was at some point.

The Heat has finally found a way to win consecutive games, something they’ve really struggled with this season, and ended up tied for the ninth place in the East, just one game behind the Raptors, eight place, one and a half from the sixth-place Hornets and two games away from the Pacers, in fifth.

The Heat wins it 98-96 behind a great defensive effort to close it out.

Not that bad, considering they lost games against the Wizards, those same Hornets, and the Pistons, that should’ve been wins.

At this point, Miami should already be in the top four of the Eastern Conference.

Trade everybody, get a whale

How many times have we read this in the past month?

And I get it. Heat fans are desperate from watching a team that seems to be lost, and very far away from that one that made them feel so happy just few of months ago.

Trading for another player is not necessarily what this team needs. I get it if they do it, but looking at the circumstances they’ve been facing, with a tough schedule, injuries and COVID-related absences, I wouldn’t get to crazy with a team that is just three games away from the third place in the East.

I know fans were tired of some moral victories, like those games they almost won against the Sixers, Nets and Celtics. But taking a look at it, that’s how close the Heat has been to change the narrative.

There are five or six games that could’ve gone the Heat’s way, and nobody would be talking about trades. That’s the reality of it.

It’s not only about the winning streak, or the losing streak they had. It’s about those games they only won or the ones they should’ve won.

That’s the difference in the narrative.

Duncan Robinson struggled once again, going 0 for 5 from the three-point line. And guess who came to save the day?

Kelly Olynyk. That same guy that frustrates a lot of fans, I would say, more often than not. 6 for 8 from threes, and second only behind Jimmy Butler in points, with 20.

At some point, it was him and Kendrick Nunn leading the way to come back from a double-digit deficit in the second quarter.

Later, Tyler Herro redeemed himself with a couple of baskets and a clutch three in the last minutes of the game. All of these, signs of a team that seems to be finding their way.

A path to a winning streak that could lead to fans believing in this team once again.

We’re still waiting to see Bam Adebayo back in a more aggressive mentality, but he keeps finding the way to almost score 20 every game.

Check the latest episode of Five on the Floor:

Should the Heat be content with the West Coast trip?
Scroll to top