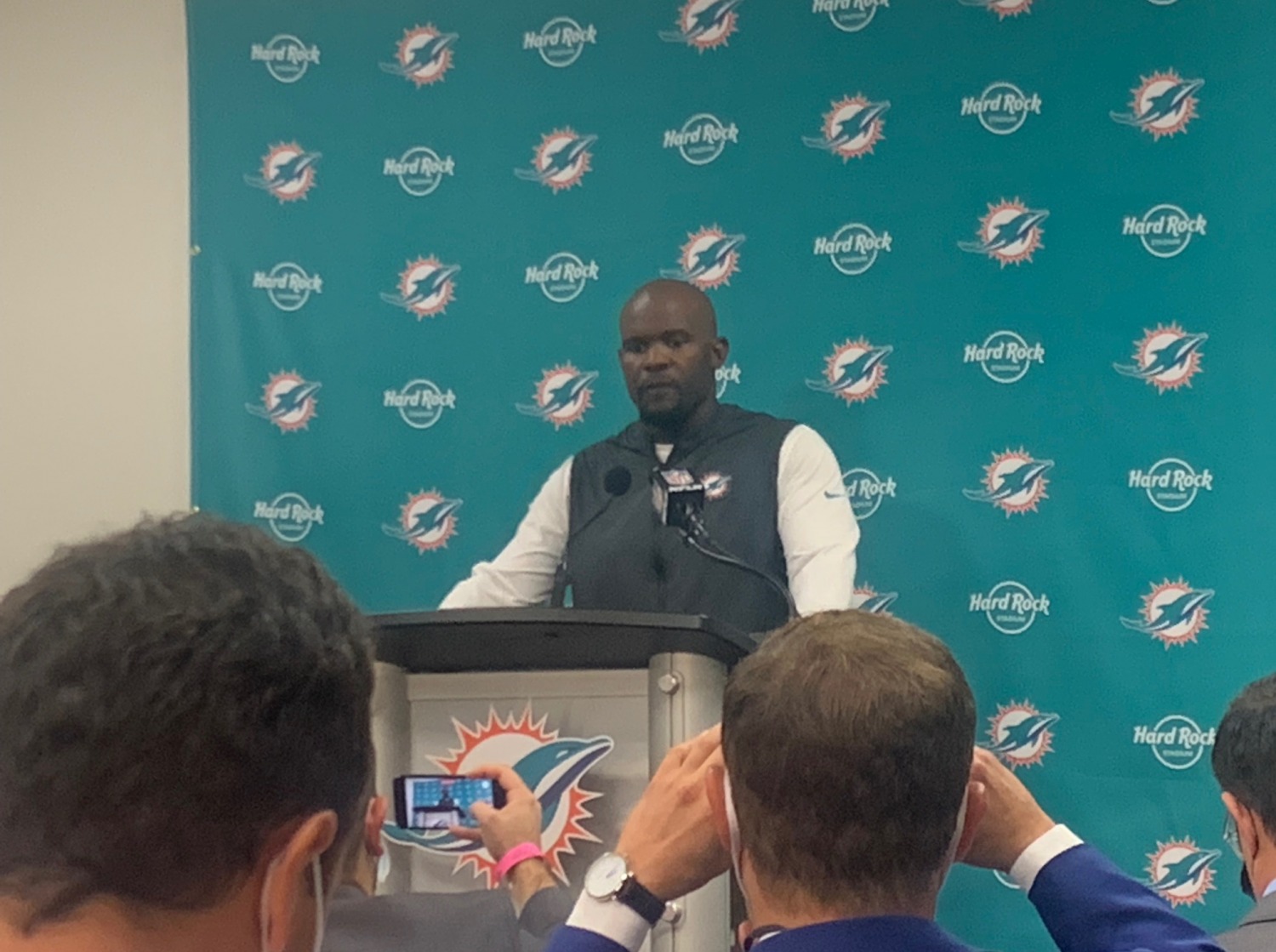 So this is what passing a kidney stone feels like.

Ball at the Colts 3 yard line.

After accumulating fewer than 80 yards in the first three quarters, there are signs of life for the Miami Dolphins, after remembering Devante Parker and Mike Gesicki exist…. and enough time (12 minutes) to make the end reasonably interesting.

It’s a situation that calls for creativity, especially if you’re aware of your offense’s undeniable inadequacies.

Jacoby Brissett keeper over the center. Nothing.

Brown over left guard. Nothing.

Finally, on fourth down, a circus catch from Gesicki on another errant Brissett throw, for the team’s first touchdown.

It turned out to be too little, too late, but absolutely appropriate for the afternoon. For the Dolphins on offense, everything is excruciating, to the point of being embarrassing. And even those of us who have been faithful supporters of the Brian Flores regime are starting to wonder. The fans already seem to be ahead of us.

Simply, it shouldn’t be this hard.

Not in the third season of a regime. Not against a winless team at home. Not when you’ve had so many draft picks and free agent dollars to expand the offensive talent base. Not even when you’re starting a backup quarterback, since that quarterback (Brissett) was decent enough to start plenty of the games for the team on the other side.

Brian Flores needs to fix this. Soon. Or his tenure is going to take a troubling turn. One his predecessors have experienced, in which every decision is questioned rather than trusted. In which an impatient octogenarian owner (Steve Ross) starts getting antsy. In which even the media start wondering if he’s experienced and able enough to make the necessary adjustments.

“I think we need to take a look at everything,” Flores said after the 27-17 loss dropped Miami to 1-3 with the defending champion Buccaneers next. “But it’s really across the board, offense, defense, special teams. It starts with me coaching…. We are out there making mistakes in all three phases.”

Accountability is appreciated, but so is accuracy. It’s not really all three phases. No, the other two, special teams and defense, haven’t been exceptional, but it’s the offense that’s been offensive. The Dolphins had Hall of Famers, and near Hall of Famers, on their defense in the late 1990s and early 2000s, and even those defenses finally broke after the offense kept bending their patience, by putting them in adverse positions. This one can’t hold up if the offense is off the field in three or four or five plays, over and over.

Through three quarters, the Dolphins had the same number of points (three) as they appear to have offensive coordinators, now that we’ve learned that Charlie Frye is actually sending in many of the plays. And those plays? Oof.

The Dolphins are coaching scared, and it starts from the top.

“We tried to be methodical early,” Flores admitted.

He said there were some big play possibilities that turned into safer checkdowns.

Perhaps. The tape will tell. But there were also big picture decisions that were overly conservative, indicating a lack of trust in the team that Flores and Chris Grier put together.

If you’re paying your kicker (Jason Sanders) big money and believe in your defense, why are you punting rather than trying a 55-yard field goal when you had momentum early?

“We wanted to play field position there,” Flores said, sounding like Dave Wannstedt from scared Dolphins teams gone by.

And they did down a punt at the one.

But is that better than a 60 percent shot at three points?

When even a missed kick would have kept the Colts on their side of the field. Isn’t your defense good enough to still stop them?

Those points could have come in handy later, when the Colts got going.

That’s the thing. Every team eventually does. Even the Dolphins do. It just comes so late, when other options are off the table, and they have no alternative but to press the action.

What’s become obvious is that, after a prolonged and warranted honeymoon, the tide is turning on Brian Flores.

“It’s a lack of focus, a lack of concentration, all of those things,” Flores said. “And that starts with me.”

He needs to put a stop to it — not just the mistakes, but also the mismanagement, of personnel, of approach, of attitude.

So his group starts scoring points.

Ethan Skolnick can be reached at @5ReasonsSports and @EthanJSkolnick. His columns are sponsored by www.EverythingTradeShows.com