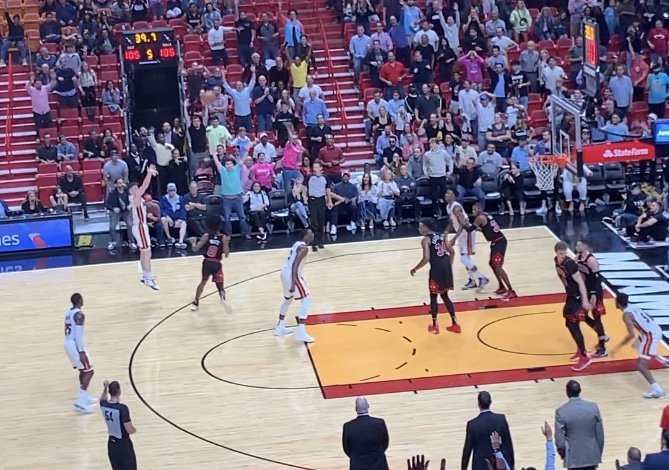 You know it when you see it.

You know it when you hear it.

And we’ve seen it. We’ve heard it. We’ve seen how these Miami Heat players have interacted with each other since training camp in West Palm Beach, or even prior, when the group workout clips started circulating on social media, including the ones of Jimmy Butler and Tyler Herro, the new Heat heartbeat welcoming the fresh-faced, drippy prodigy to the NBA and team fraternity, no pledging or hazing required. We’ve heard how the front office and coaching staff has spoken about this collective, about how selfless they are, about how connected they are, about how hungry they are, about how versatile they are, about how precocious they are. “This has a chance to be one of my favorite groups,” a Heat official who has been with the team for more than two decades told me in early September. “Just watch. People are underestimating us. This has a chance to happen fast.”

And we believed them. Or at least I believed them. I even put your money where my mouth was, suggesting you go over the 43 wins that the Las Vegas oddsmaker set on the futures table, suggesting you look seriously at Bam Adebayo as a Most Improved Player candidate, Erik Spoelstra as a Coach of the Year option and even Butler as a Most Valuable Player darkhorse. My co-hosts on Five on the Floor took a little more time, perhaps. But they came around too. They saw what I saw and kept saying — if you give Spoelstra an less cluttered roster full of motivated players with a defensive mindset, special things can happen.

So we’re not surprised about this, not completely, not on the Five on the Floor podcast. Impressed, but not surprised. Not that it’s gone well. This well? Starting 17-6, after a 110-105 overtime victory against the Chicago Bulls on Sunday evening, giving them as more wins than 25 of 29 other teams? Winning all 10 home games, after underperforming badly at American Airlines Arena in recent seasons? Losing only to teams that are currently in the playoffs, with all but Minnesota well over .500 entering Sunday’s play? Doing this while shelving more than $25 million (James Johnson, Dion Waiters) for assorted issues; while missing two of the three primary ballhandlers (Justise Winslow, Goran Dragic) of late; while relying on two rookies (Herro, Kendrick Nunn), one 19 and one undrafted, as two of their five leading scorers; while counting on two more projects (Duncan Robinson, Chris Silva) in the rotation?

This is what the Heat are — or at least, this is the floor. There likely won’t be a championship, not yet, but there won’t be a collapse. Barring a major injury, something more significant to a primary contributor than what has caused Winslow and Dragic to miss 18 combined games, with both soon to return, this team should continue to improve as the season progresses. There’s simply no reason they shouldn’t. Yes, there will be bumps. Every season, every roster, has them. The Big Three teams had them. So why wouldn’t these guys? We’ve already seen Nunn encounter some, especially on the road against better opponents, with prepared teams taking advantage of his tunnel vision. We’ve seen Adebayo pass when he should shoot; that played a prominent role in his seven turnovers Sunday, the only nit in his otherwise superlative statline. We’ve seen Butler struggle more with his jumpshot than in recent seasons. And we haven’t seen enough of Winslow and Butler together to know whether, offensively, it can really work.

But you know what else we’ve seen?

Trust in each other.

Growth individually, and together.

And winning at less than their best.

Take Sunday. Yes, take it. Embrace it, in all of its ugliness. Choppy. Uneven. Unsightly at times. And yet, when it mattered, when the customary closer (Butler) had lost his legs, when his shots were coming up short — when he was already so weary that he would spend several minutes slumped in his locker stall later, acknowledging his exhaustion — he turned to a kid who was born exactly one year prior to George W. Bush’s first inauguration. A kid most of Miami didn’t want Pat Riley to select, even with John Calipari’s endorsement and that Kentucky pedigree. A kid who wore the loudest outfit on draft night but speaks to media members in the quietest voice. A kid who has that ideal combination of conformity and cockiness, who wants to work and then work his opponents over. A kid who won over a demanding, star teammate in a way that three former No. 1 overall picks (guys named Towns and Wiggins and Simmons) clearly did not in previous stops.

A kid who scored 27, including three three-pointers at critical times after a slow start to the night, including 16 of the Heat’s final 18, including 11 in overtime.

“You saw in college, with the biggest moments, that’s where he was playing his best,” Spoelstra said Sunday of Herro. “If your max player trusts you in these moments….”

That Butler does. Implicitly.

“We’ve got a lot in common, to tell you the truth,” Butler said. “But more than anything, I respect the way he works, the way he carries himself.”

Their big/little brother bond is obvious. Been obvious. And that trust has been remarkable and refreshing.

But not more than Herro trusts himself. He trusts his shot like he trusts his wardrobe. As he told me when I asked in camp who has the most “drip” in the NBA: “I do.” Who’s second? “No one’s close.”

Sunday, the Bulls weren’t close enough to him on the floor. Not after Butler drew the defense. Not after scrambles.

Not when it counted.

Tyler Herro tonight in the clutch versus the Bulls per @nbastats

19 years old and just getting started

It looked like he was seeking those opportunities. To be the hero or goat.

Sunday night, he stood in front of the locker stall that LeBron and Shaq once did.

“Uh, yeah,” Herro said. “I don’t shy away from taking the big shot. I have a lot of confidence. So down the stretch, Jimmy trusts me with the ball. He got me it in good spots, and I knocked down a couple of threes.”

“They had to pick their poison, either Jimmy or me,” Herro said, with a hint of a laugh.

Then he remembered he’s a rookie. On a team like this. Where everyone praises. Everyone trusts. No one steps out too much, drip or no drip.

“… Or… there were three other guys on the floor with us, that will hurt them too. So they had to pick their poison.”

Some fans picked up and left when LeBron did. It got too difficult. Too many Henry Walkers and Danny Grangers. Too little Bosh. Too many poor offseason decisions, at least during 2016 and 2017. Too much heartache when Wade bolted, at least until he returned. Too little that was real, even that 30-11 finish to 2016-17 that duped the front office even more than it did the public. But this organization never stays down too long. It reinvents. It reinvigorates. It reminds you of what it has been, and likely will be again. Sunday, a kid who looks nothing like Wade brought back memories of how Wade introduced himself way back in 2003, with moments like these, moments that let you know he was different, and his teams would be different. Moments that made you look forward to years. Moments that confirm what we’ve been seeing and hearing since the spring and summer, when the moves all started to make sense — and if you started paying attention then, or even now, you picked a damn good time to come back.

Ethan J. Skolnick has covered the Miami Heat since 1996, and now hosts the Five on the Floor podcast.