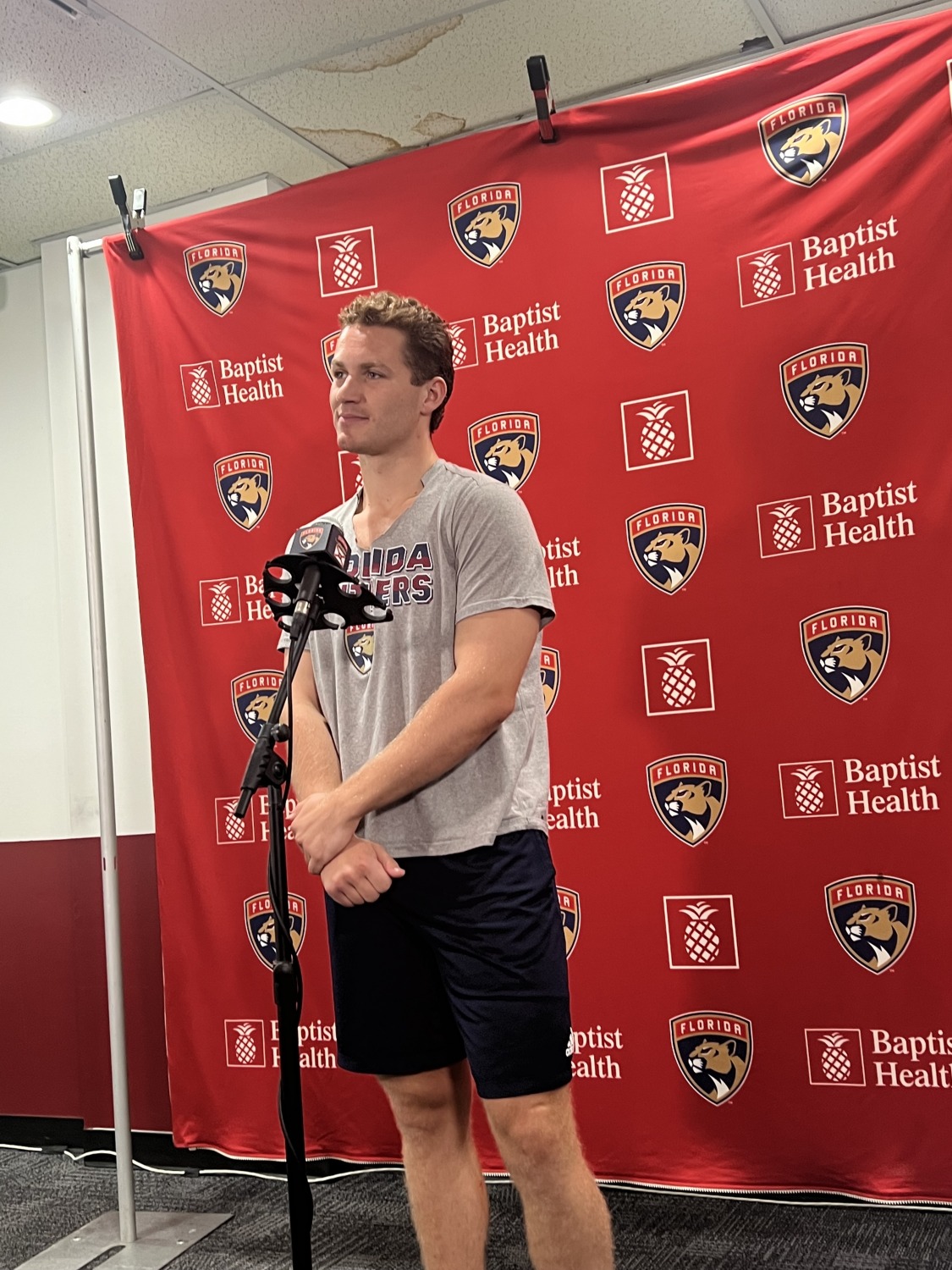 CORAL SPRINGS, Fla. – It’s been two months since the Florida Panthers pulled the trigger on a blockbuster trade that sent 24-year-old Matthew Tkachuk to Sunrise.

This past week, Tkachuk finally hit the ice for formal skates, alongside 55 other players at Panthers training camp.

While only being in South Florida for a short time, the new star in Broward County is already loving life under the sun.

“(It’s) 10 times better than what I expected, 100, it’s been unbelievable down here. The guys have been awesome, living here is incredible,” said Tkachuk. “I couldn’t have imagined being here on the first day of camp and feeling like I’ve lived here for 20 years, but I have and it’s been awesome.”

Tkachuk has been in South Florida putting in the work over the last few weeks, alongside many other Panthers players, for informal skates without the coaching staff.

When he hit the ice on Thursday for day 1 of camp, it seemed like the first-year Panther had been with the squad for years.

Whether it was his enthusiastic on-ice reactions or taking an extra friendly swing after a drill, he isn’t afraid to let his character show when the uniform is on.

“We’re all very intense, but everybody’s having a blast so far. The past few weeks have been awesome, I’ve enjoyed every minute of it,” said Tkachuk. “When you’re having fun and also bringing that intensity, I think that’s the recipe for success.”

Off the ice, Tkachuk is the same way, he’s himself. The Panthers’ forward expressed his excitement about being in Florida with this group of guys.

“I knew how great of a team they were, which is the main reason why I came down here,” Tkachuk said Wednesday. “Everybody is better than I expected them to be, it’s a very talented team. We’ve had lots of fun so far getting to know each other.”

As Tkachuk spoke highly of the team, likewise, his new teammates weren’t shy to talk about his character.

“We welcomed him here and right away the first message was F–– right,” said Barkov during media day. “He wants to win, he wants to bring that character he has to this organization and I think he’s done some damage already.”

Around the league, Tkachuk has received a reputation for being a pain in the backside for oppositions to play against.

“I think he pisses you off because he’s good, he backs it up,” said Panthers forward Sam Reinhart.

While Tkachuk moving to Florida was the big story of the off-season, he isn’t the only Panther in unfamiliar territory.

During the summer, Florida brought in long-time NHL head coach Paul Maurice to assume the position behind the bench.

With a new coaching staff, all the players had to learn new systems on day 1.

With the whole team entering training camp under a new regime, Tkachuk didn’t find his first skate with Maurice too nerve-racking.

“There’s a lot of new pieces here,” said Tkachuk. “Coming in as a new guy, I actually feel more comfortable with the new coaching staff because everybody’s in the same boat and we’re trying to get caught up to speed on what they want and what the expectations are.”

Tkachuk applauded the professionalism put forth by Maurice and his staff on the first day of camp.

“I think they’re pretty clear that they were going to be very intense practices, it’s just a very professional attitude around here, it’s very scheduled,” said Tkachuk.  “(It’s) something that I’m very excited about.”

There is still a few weeks before Panthers fans will be able to see Tkachuk live in Sunrise for a regular season game, but the new fan favorite is ready for the 2022-2023 campaign to get underway.

“Let’s get these games going. I’m sick and tired of just practicing and working out, I want to start playing some games,” Tkachuk said on Wednesday.

The Panthers put a lot of chips on the table for the opportunity to get Matthew Tkachuk and so far he is enjoying every moment with the cat on his chest.

One thing is clear after seeing him around the team this week, he wanted to be a Florida Panther.

Pressure Point: 3-0 Dolphins may be building something special
Scroll to top