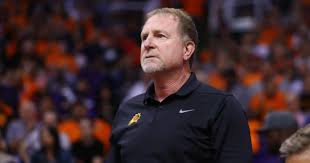 In a strange turn of events, Phoenix Suns and Mercury owner Robert Sarver saved the last scrap of decency to his name and began the process of looking for buyers for his clubs.

This time, it didn’t take the NBA communicating with a special ally through back channels to ease the removal process. The league didn’t have to get their hands dirty.

The news was announced in a statement, and in his admission, Sarver said that as a “man of faith,” he believes in forgiveness after atonement. I doubt that day will ever come.

The lasting impression people take with them about another individual is how that person makes them feel. I can’t imagine the men who heard his racial remarks or those who were unnecessarily exposed to Sarver’s dingus have walked away from their experience in a pardoning mood. Or the women who were subjected to his lewd comments and intimidating behavior being equally as excusing either.

One detail among the innumerable unseemly findings of the Wachtell Lipton report is that Sarver was comfortable making lascivious utterances about the wife of one of his players. According to him, the spouse of his employee likely gave “good blow jobs.”

Perhaps the rebuking comments of minority owner Jahm Najafi helped Sarver discover how unlikeable he is. Maybe it was PayPal dropping sponsorship of his team. It doesn’t matter. Eventually, the Suns and Mercury will be signed off to someone else, but it’s the league’s responsibility that the next person or group in charge aces the qualifications of integrity as much as the financial obligations.

This was unexpected and the best possible outcome that could result from the shenanigans in Phoenix. Silver had the authority to suspend Sarver indefinitely, but the power was mildly used with a one-year ban plus the $10 million fine. Eventually, he had to come back, which left the possibility of him being a disturbance to others once more.

Silver didn’t do enough, but decades from now, when the details of how it all transpired have faded from most people’s memories, history will remember his tenure as commissioner fondly. When the sales are complete, under Silver’s watch, the NBA will have rid itself of two animals who were unworthy of ownership.

In his statement, Sarver also said that “in our unforgiving climate,” it is impossible for him to make amends. Contrary to popular belief, it isn’t. Forgiveness is awarded to those deserving of it. A couple of quotes expressing remorse don’t absolve him of his sins.

Maybe the door will smack some sense into Sarver on the way out.

Matthew Tkachuk is enjoying life under the sun
Scroll to top