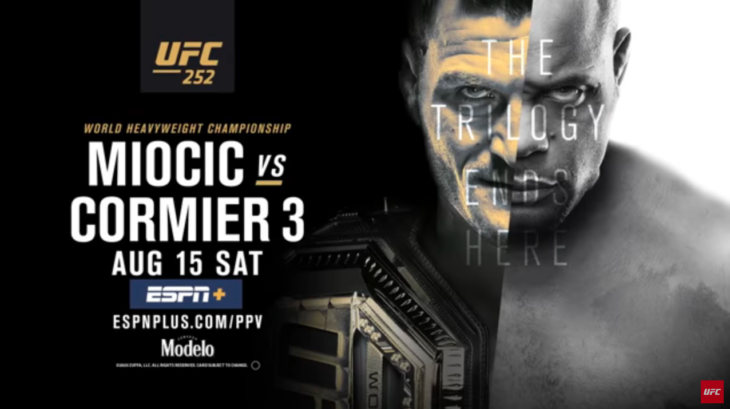 Daniel Cormier, at the age of 41 fights for the last time this Saturday as he has promised that this will be the last time he walks to the octagon. This is not a showcase however, as he is challenging UFC Heavyweight champion Stipe Miocic in a rematch from his loss on August 17, 2019. Both fighters come in off this fight for equal near year long layoffs. The third in their trilogy (Cormier won the title from Miocic in their first fight on July of 2018) promises to show the biggest contrast in styles of all three encounters.

Daniel Cormier is telling anybody who will listen that “this time” he will go to his roots and use his wrestling to take control early and often in the rubber match. After winning with some dirty boxing, and finishing Stipe with a short right hand that dropped him, and then finishing him on the ground in round 1, he later fought the rematch with a confidence in his standup game, that seemed a bit unfounded, but then again, he was getting away with it till Stipe found a right hand in the fourth round that stumbled Cormier and ultimately ended the fight.

So how does Stipe Miocic win?

Box. Box. Then Box some more. Use left hooks to the body, but above all, keep your distance with jabs to the chest, then find the range for your right hands, and above all, be patient. Miocic has to “fight tall” in this one, to at the very least control the tempo. It can be argued that in their two first fights, Cormier controlled every minute of every one of the fights save for a short stretch in fight two, and the finish by Miocic in round 4. One thing that cannot be discounted is the body work Miocic did with the left hooks he kept hitting Cormier with in their 2nd fight. That investment probably led to Cormier consciously defending his body, lowering his hands, and being open for the punches that led to his demise.

So how does Daniel Cormier win?

Do what he says he is gonna do. In a recent podcast he did with wrestling savant and Jorge Masvidal meme Ben Askren, Askren said to “DC”: “I just want to remind you, you are world class, you are a United States World Team member six years straight. You can take this man down any time you want on Saturday night, just in case you forgot.”

It really could be that easy. DC is one of the best of all-time, a surefire hall of famer and nobody is going to hold it against him if he just controls Stipe for 5 rounds, gets his title back, and rides off into the sunset. I think he will do just that. With one caveat. He will have an opportunity to finish Miocic, and he will take it.

"I just want to remind you, you are world class, you are a United States World Team member six years straight. You can take this man down any time you want on Saturday night, just in case you forgot."@Benaskren gives @dc_mma some advice ahead of #UFC252 (via @arielhelwani) pic.twitter.com/InJgFqpNnz

All UFC 252 Odds cited are via SPREADS

The Most American Sport on the Brink Because of Modern Americanism