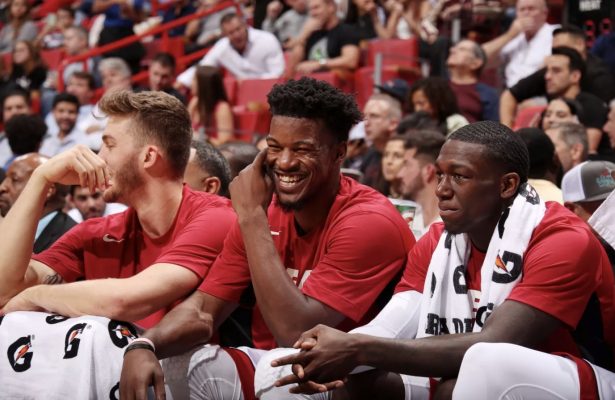 Forgive me father for I have sinned. It’s been nearly 30 days since I last did what I vowed to never do and what I proactively try to avoid and that is get into a protracted exchange with someone on Twitter. And I could have left well enough alone but, God help me, I just could not. It’s like Michael Corleone in the terrible Godfather III, “Just when I thought I was out, they pull me back in.”

Just a little programming note, this is not going to be a breakdown of the NBA Eastern Conference Finals between the Miami Heat and the Boston Celtics. Heck, it’s not even about the playoffs. Folks far smarter than I have that well covered on the latest episode of Five on the Floor. Or get a recount of the Heat’s presser courtesy of Brady Hawk.

Truthfully, this piece will be a bit selfish. Well, plenty selfish.

So this began a couple days ago when writer Chris Haynes reported that Giannis Antetokounmpo was meeting with Milwaukee Bucks ownership to discuss his future and the team’s direction. Of course, many in the Twitterverse weighed in. Writer Kevin O’Connor replied with a smiling Jack Nicholson meme and wrote simply, “Pat Riley right now.”

Oh how I loved it.

Naturally, many people commented. But one in particular got my Irish up. I’ll refrain from sharing his Twitter handle to save him from any embarrassment because, really, it was rooted in foolishness. In order for you to keep up, let’s just call him, “Stu”.

Stu provides several scenarios that go on to mock what teams would feebly offer Milwaukee in return for the Greek Freak. He offers his assessment as best as anyone can in 280 characters and a natural reaction to chime in within seconds of the Tweet he just read — misguided, uninformed, and half-cocked.

Stu cites Miami as having nothing but a, “…glorified role player that you’ll have to pay 20 million plus, some role players, and a shitty first.”

Of course, Stu is referring to Bam Adebayo as that glorified role player. Hell to the no, he didn’t just go there.

Our exchange featured me weighing in with the usual Miami Heat stan talking points:

As you can see, everything is great because it is.

Stu’s reply is that the Bucks will want someone under 25 and that Bam is not. He continues blaspheming by saying that Bam is not, “…a blue chipper.” I became enraged. The gall of him to not only get it wrong but to add years to our guy. So unnecessary.

I correct him that Bam is under 25, is a first time All-Star, and is blossoming. He blows right by the correction of his erroneous take. We essentially go back and forth.

I’m touting Pat Riley, Andy Elisburg, Erik Spoelstra, and a partridge in a pear tree. His only retort is that the Bucks will want something significant in return in exchange for their guy, which I don’t disagree with. It’s Stu’s contention that the Heat have nothing to give, which he is not entirely incorrect. And though Stu’s Twitter bio simply says, “Hoops fan”, he has a George Mikan headshot as his profile pic, and has, “Hoops” in his handle, I am getting the feeling that his exposure to “hoops”, as he would say, is whatever happens to crawl across his telly on TNT or ESPN. I write this because he is utterly dismissive of Riley and company, replying condescendingly that he appreciates my fandom and that I’m acting “…like Miami is the only decent FO and because of that their getting him.” Yes I just wrote exactly what he typed.

Firstly, ladies and gentlemen, please make sure you know the proper uses of there, their, and they’re. It’s like to, two, and too. These things annoy the bejeezus out of me. it feels like Stu knew this and did it purposely just to annoy the hell out of me.

Anyway, my counter is that with this front office, I…have…seen…some…ish. We all have.

I finish off by sharing with Stu a recent episode of the Lowe Post podcast where ESPN writer Zach Lowe spends an hour plus with Dan Le Batard and is just gushing over Heat culture and their wonderful front office. Side note, you can get the comments directly at the 10:00 and 55:00 minute marks! Stu can hear from a more reputable source echoing my opinion if he so chooses.

To me, I feel like it’s a good little capper to my exchange with Stu. I feel like I’ve taken his lunch money, his Trapper Keeper, and his extra bag of Doritos.  I imagine that if Stu is actually listening to the episode that he’s trying to figure out exactly how to respond. I imagine it’s a lot like Kayleigh McEnany looking down at the podium and rifling through papers whenever presented with irrefutable evidence of stupidity that she needs to answer for or meanderingly explain. And like Kayliegh’s reflex is to desperately search for a coherent retort, so too is Stu’s. He’s likely to miss the point and just reply with something rote like, “The Heat have no players the Bucks want.”

And with that, this entire exchange would be all for naught. Insert face-in-palm emoji here.

The reason I share this story is to lend more credence to the narratives that everyone hates the Heat and that we Heat fans are easily triggered. Well, at least this Heat fan is. Nothing gets me going more than anti-maskers, anti-vaxxers, and, now, anti-Heaters.

Heat fans, we have become emboldened not just by this moment, but by the sum of all the moments where our team seemed out of the running or down for the count or Stephane Lasme and have come triumphantly out the other side like Andy Dufresne crawling through miles of shit in Shawshank Redemption.

Heat fans, we are excited that regardless of the result of this series against Boston, this past season would be just the appetizer preceding the main course that is the summer of 2021 or whenever we get back on track from COVID. And that is when we will truly feast!

Was this exchange necessary? Likely not. But our team–our Miami Heat–is in the Eastern Conference Finals. Nobody defecates on our team, not the least of which someone who had the temerity to call Bam a role player or dismiss the power of our team’s culture.  Not now.

Stu did give a valiant effort, but ultimately he should go home and get his shine box. So in honor of the brave educators out there caring for our children and our future, Stu gets an “F”.

Thanks for reading. Wear a mask. Let’s go Heat.

Season Ticket: It’s Heat vs. Celtics, Riley vs. Ainge, as it should b...
Scroll to top