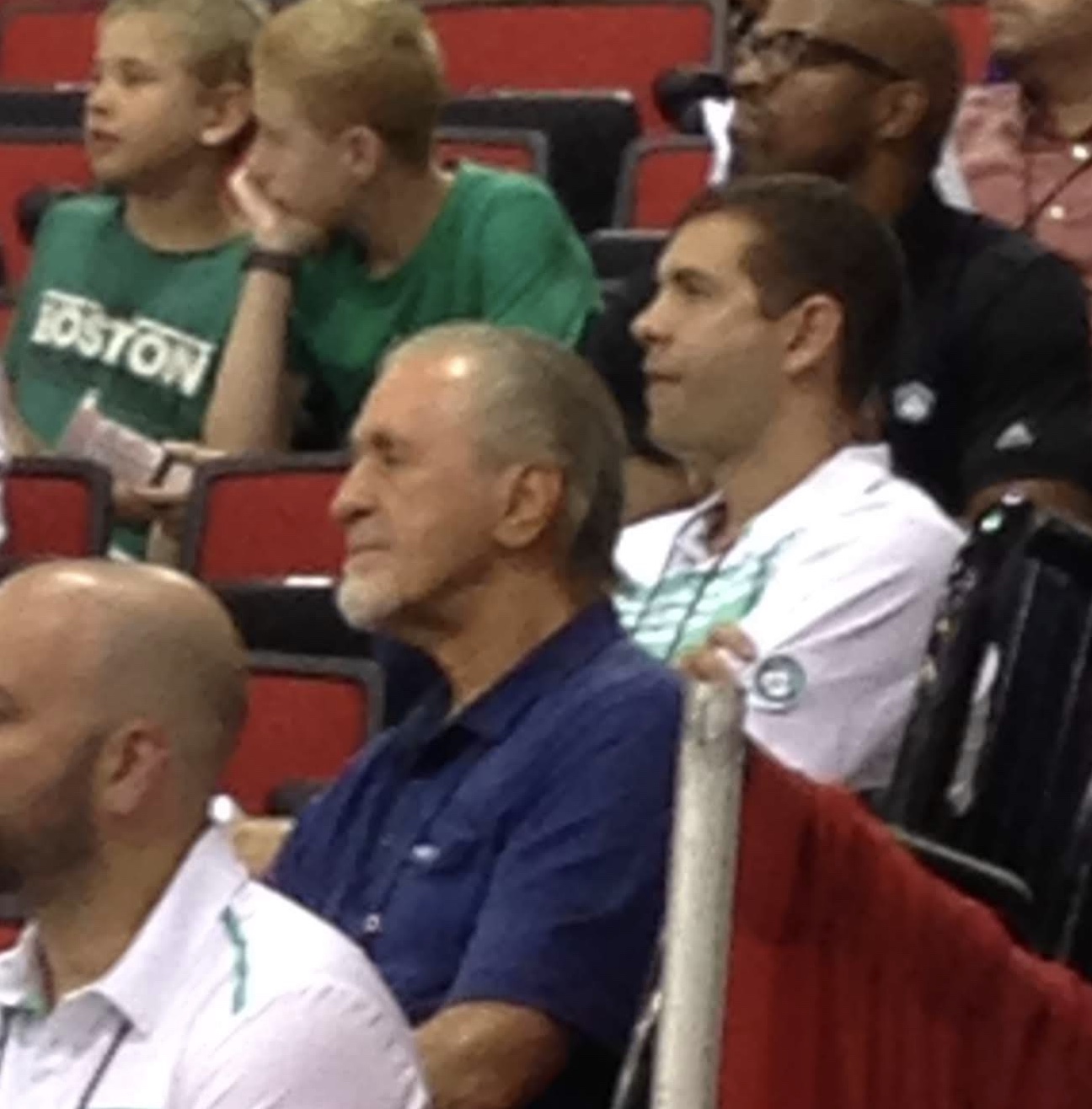 Everyone always is asking for moments, the behind the scenes stuff that made the Big Three era of Miami Heat basketball so unique, so special, so surreal, a spectacle never to be repeated in any sport at any level. Most memories are hazy now, more than six years out, with all gone from the Heat roster but the Miami Methuselah himself, the venerable Udonis Haslem, and the world changed in virtually every other way. But I always return to New Orleans, on the 29th of March, 2013, for the moment when it most felt like it would never end.

The Heat, at the peak of their powers, and on the strength of a beer-addled Shane Battier bus speech on Super Bowl Sunday in Toronto, had just ripped through the NBA for 27 straight victories, some dominant, some miraculous (poor Cavs and their 27 point lead), most running together now in retrospect. That streak, however, had ended two nights earlier in Chicago, on a series of Kirk Hinrich hip checks and 45 combined points from future Heat players Luol Deng and Jimmy Butler, with LeBron James — who has never played better basketball than during that three-month stretch — complaining in the United Center locker room about the Bulls’ cheap shots.

So now two days had passed, and word had gotten to James, as it always did, about someone taking another sort of cheap shot at him. Apparently, Danny Ainge, one of the NBA’s all-time irritants, had injected himself in the discussion by blasting James on WEEI-Boston for whining too much: “I think it’s almost embarrassing that LeBron would complain about officiating.” As the Heat’s morning shootaround ended, before he exited Smoothie King Arena, James corralled a couple of hungover reporters to engage in conversation about Ainge’s comments.  He was smiling, but serious.

That night, the Heat were scheduled to face the Hornets, the team that would become the Pelicans, featuring Anthony Davis, who now is James’ teammate with the Lakers. Four of us gathered in front of the visiting locker room at Smoothie King Arena to hear from Erik Spoelstra about starting a new streak and finishing the season strong. That’s when Tim Donovan, who has run the Heat’s media relations since Pat Riley arrived in 1995, emerged from the locker room with a message, scribbled on a napkin or a small sheet of paper or something.

“Danny Ainge needs to shut the f— up and manage his own team.”

So we did, and then a few minutes later we were allowed to enter. There was James, as always, sprawled out in the center of the floor, his trainer Mike Mancias stretching him as he furiously scrolled through Twitter, the broadest smile you’ve ever seen at the show of support, before sprinting to the court and sinking six three-pointers in the first half on the way to an 18-point win.

Riley, using Ainge to his own ends, was never losing.

The Heat’s success…. was never ending.

It did end, of course, if not until after another championship and another NBA Finals appearance.

James did leave, of course, ultimately bristling at Riley’s control, among about 30 other factors.

Riley did lose, not just James, but franchise icon Dwyane Wade, and enough games to miss the playoffs in 2014-15, 2016-17 and 2018-19, three of only six times that’s happened in a quarter-century. Worse, he lost his way, forgetting who he is and what his franchise represents, overpaying average players rather than merely developing them, blocking the path for the truly elite to arrive. As he put it so succinctly after too many run-ins with the likes of Whiteside and Waiters, “I let the culture slip.”

But here Riley is, literally perched up in the rafters to watch a Bubble team that embodies that culture better than any in his entire Heat tenure, a collection of hoop junkies pushed by four grizzled veterans, two of whom (Jimmy Butler, Goran Dragic) told their families to stay away because this was a bleeping “business trip,” one of which (Andre Iguodala) is best known for ripping a Finals MVP from James, and one of whom (Udonis Haslem) is somewhat responsible for anyone still playing at all, since he’s the one with the cred and guts to stand up to James and others in a tense NBA players meeting and tell them how things needed to be, how they needed to use their platforms. Riley’s here with a team filled out by young grinders, two of them (Tyler Herro, Bam Adebayo) also part of Bluegrass Nation, both more talented than he was as a player, but with the same rugged mentality as when he hounded Jerry West in practice. He’s here with a squad carefully molded by a coach, Erik Spoelstra, who is now even better than he ever was, but stands as a testament to the stability and consistency and trust of the organization Riley established.

"No friends in the Bubble"

And look who stands in his way.

“The biggest whiner going when he was playing,” Riley also said of Ainge in that statement, on Miami Heat letterhead (!), in 2013. “And I know that because I coached against him.”

Whiner isn’t that far removed, in terms of letters, from winner.

And Ainge, like Riley, is that too. As a player. As an executive. As a team-builder. As a rival. That is why he gets under Riley’s skin so much, because not everyone earns that insertion. Riley’s Lakers took two of the three NBA Finals meetings between 1983 and 1987, but it was never easy. And while the Celtics were largely dormant in Riley’s first decade with the Heat, missing the playoffs the first six seasons while coached by ML Carr and Rick Pitino, they have been a force in most of the seasons since.

This is the Celtics’ sixth Eastern Conference finals since he assumed control of the front office in 2005.

Only one East franchise has been here more since.

The Heat, with seven.

Riley has been the ultimate scavenger during his Heat tenure, even winning titles with two players Ainge no longer really wanted, Antoine Walker in 2006 and then Ray Allen in 2013. Now he has Kelly Olynyk and Jae Crowder, both discarded by Boston in the accumulation of other assets. But there is no denying Ainge has done something significant in Boston, learning from the decline of his own dynastic 1980s team by swindling the Nets in dumping the declining Paul Pierce and Kevin Garnett on them — just in time for Riley’s Big Three to render them impotent in Brooklyn — for a slew of selections; robbing the LeBron 2.0 Cavaliers in the Kyrie Irving trade; then recovering from Irving’s implosion by replacing him with the more pliable, amenable Kemba Walker. He and Riley haven’t done everything the same, but they are more similar and successful than any other executives in the Eastern Conference for the past 15 years, with only Toronto’s Masai Uriji close. Neither believes in following a fickle, bogus Process, and both made the 76ers look silly with recent transaction, Ainge scooping up an extra first rounder to slide down and take franchise cornerstone Jayson Tatum instead of Markelle Fultz, and Riley taking Jimmy Butler from the 76ers for a nice but replaceable player (Josh Richardson) he took 40th overall.

And so they both here, after the ebbs and flows, both positioned to stay atop the East for a while, or at least as long as each continues in his current position. Ainge is 14 years younger, but greybeard Riley has appeared equally vibrant of late. He has a team he loves, a coach he trusts, cap space he craves. He has a strong stable of minds in his front office and on the sidelines, so strong that every team in the league with an opening is trying to steal the likes of Dan Craig and Adam Simon and Shane Battier, and no one seems to want to leave. He has his reputation back. And he has a star in Butler who shares his f-the-world ethos even more than James does, and who would absolutely say the same to Danny Ainge or anyone else without thinking twice.

He has Danny Ainge’s Celtics in his sights, with LeBron James and the Lakers possibly on the other side, since everything in the NBA always comes full circle. He has shut the f— up and managed his own team this time, staying mostly behind the scenes, letting Spoelstra shape it into a modern masterpiece, with ball movement reminiscent of the Spurs squad that ended James’ Miami time But so has the other guy, the guy in green, the one he respects as much as loathes, the one who has his own solid veterans and his own young stars and his own amiable, creative young coach in Brad Stevens. Now we see, once again but probably not for all, who has f—– managed better.

Ethan J. Skolnick (@EthanJSkolnick @5ReasonsSports) has covered the Miami Heat since 1996 and is the CEO and Chief Content Editor of Five Reasons Sports.

We’re Miami Heat fans, and you may not understand