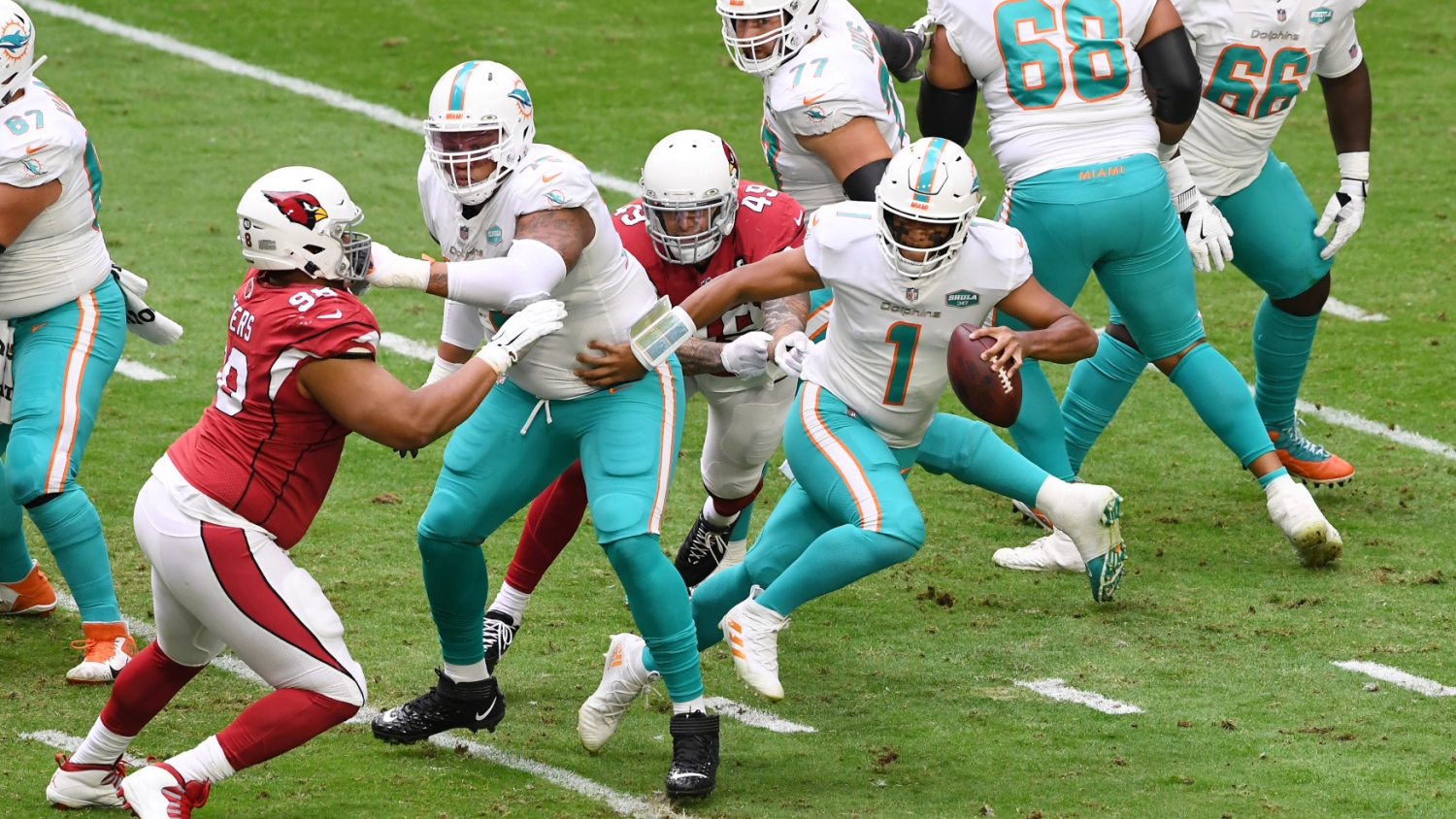 After the shellacking against Buffalo, I re-watched the first two games of the season, putting an emphasis on the offensive play calls and personnel groupings.

I came away with the following that the Miami Dolphins should not base their offense on the RPO and adapt a more pro-style approach to help with better play calling, personnel groupings and situational calls.

The rumblings coming out of this off-season was that the Dolphins would run more RPO’s for Tua Tagovailoa. Boding well for him, he was a great RPO QB in college and a fast trigger to do it, there is a big issue about revolving an offense based on RPO’s. The NFL is not designed to accommodate RPO heavy schemes.

Frank Reich and the Eagles pedestaled it onto the national stage during their super bowl run in 2018. It was a new concept in the NFL, the Chiefs also ran it sparingly. The biggest key- compared to College rules and NFL rules is that in College, Offensive lineman have leeway to go 3 yards downfield in coverage compared to one yard in the NFL.

This may be an unpublicized point of emphasis in the NFL, Ineligible Player Downfield:

The NFL has been cracking down on this as a result of increased RPO calls to maintain offensive and defensive balance.

When running an RPO, offenses have to remain simplistic with two to three options 3for the QB to do. This usually consists of the QB giving off the ball to the RB, and his first two reads on the field. The ball has to come out quick and the offense cannot get overly complex as you have to make the reads while defenders make their way to the QB.

The first few reads can be WR screens, slants, crossers and flat routes to get easy yards and move the chains. It acts as another form of running the ball without actually running the ball. In theory, you will likely have more defenders in the box leading at least one WR to get open.

The Chiefs integrated a 2 step speed out pre-snap RPO to their offense in 2019.

This has reduced the amount of post-snap RPO’s they used.

They always run it with Watkins as the receiver, and always to the boundary

Very efficient concept when the DB is off pic.twitter.com/uLSK8SvFUe

Steve Sarkisian, former Alabama OC and current Texas HC, once said that the more options you give quarterbacks on RPO’s the more likely they’ll pass the ball. However, in the NFL defenses have adapted by overloading the box by taking away the run read, forcing the QB to pass the ball.

The typical counter to RPOs, particularly in the NFL, is to play man coverage. The RPO is built around creating conflict for defenders on whether to play run fits or coverage assignments.

The QB then punishes indecision or an aggressive run fit with the quick pass. Man coverage erases that conflict by telling the defenders to stick to their men and dropping a safety down to ensure they still have enough numbers in the box to stop the run.

In a RPO, the first assignment executed is run blocking. Once a lineman has leverage while maintaining his block on the defender he drives him downfield and onto the second level. If the QB opts for the pass play and the OL keeps going downfield to the second level it will be called as an illegal man downfield. Remember, the rules dictate an OL can be 1 yard down the field.

LB coaches have learned this and coach players to wait for the run play to develop before heading towards the LOS. If the OL gets upfield the LB can win with speed and put pressure on the QB to disrupt a pass’ timing or an open lane to get a sack.

Tua’s playmaking ability can’t be understated (especially when moving to his left).

Although this play was called back due to ineligible man downfield, Tua makes a nice read to find Gesicki right at the sticke. Hope to see more of this pic.twitter.com/NsVnFxw0QI

Usually, RPO’s are done out of 11 personnel (3 WRs, 1 TE). Defenses counteract this by showing man coverage on the field side (wide side of the field). Miami has a 32% success rate in 11 personnel. Yeah, it’s a problem.

No QB should throw a screen pass in a 2 WR look on one side of the field when DB’s are playing press man or man coverage. Thus, defenses will expect and anticipate either a slant or stick flat concept on the other side of the field.

In this scenario, the run is taken away, you cannot throw a screen pass, what’s left is the stick play on the boundary which is a one-on-one matchup. Defenses they can load 6 defenders in the box, and DBs to cover each WR, leaving one safety to cover a TE and another to monitor the deep parts of the field or the middle hooks.

This RPO looked as if it were executed as it should be and it was sound in theory. Just sometimes it’s good player vs. good player and you have to see which good player wins. pic.twitter.com/KBiLPAoo9j

We saw this on the very first play against Buffalo. The Safety doubles Devante Parker to make it a boundary throw and the play is dead as all options are covered up and Tua takes a sack from a free rusher. Another issue, sometimes because of scheme limitation– at time’s you have to allow a free rusher to come through.

I'll be delving into the limitations of the RPO offense for Miami in an article @5ReasonsSports soon.

Thanks to @PhinstantReax for the inspiration

The very First play and the slant is the first read, the Bills double DVP and Tua has to look to his next read

If you take a look at Tua’s second read, Waddle is going deep but also covered up. Basically, the only read that could be successful would have been the run.

Which leads to another problem. Miami does not have aggressive run blockers that can allow their RB’s to get downhill.  Linebackers know they can slow play the run because it takes longer to develop. Also, defenses know how to cover up the main route concepts of RPO’s. Since runs are based off of RPO’s there is no actual running game.

This in turn leads to no threat of a play action passing attack, defenses will not bite at all. They just have to send four to five blitzers at a time and get home and it has been working the last two games.

In the NFL, there’s little to no margin for error and a high risk of either committing a penalty or forcing a throw off a bad read. RPOs are designed to be quick and generally only include low yardage  hitch routes, slants, and outside runs.

NFL Defenses know how to workaround RPO’s, especially if an entire offense is based on the RPO. I may be overgeneralizing but what has Miami ran a lot of these past two weeks?

I am not saying that the RPO is a bad idea, it can work, it has worked in the past and is working now, but to a certain extent.

The overall point stands, if an offense is based on the RPO, vertical concepts and a real run game are diminished. You only hurt yourself.

“The biggest concern with RPOs is the quarterback getting hit… After all, part of the deal here is that they are blocking as if it’s a run play; they are not protecting the passer. [ESPN’s] Jon Gruden calls it ‘Ridiculous Pass-protection Offense,’ and I understand what he’s saying. We’ve got to get to where it’s sound, so we feel the quarterback can make a read, and if he’s correct in what he sees, then he shouldn’t take a hit”

In the college game, they can serve as the main focus of an entire playbook, the same way the triple option is. It cannot be done in the NFL.

In the NFL, RPOs are a wrinkle to a pro-style offense that can help force man coverage or bring better angles and numbers for the run game. However, without rule changes, they are nothing more than a gimmick to give the QB a fast option to punish an aggressive run defense.

What George Godsey and Eric Studesville need to figure out is play calling tendencies and personnel packages.

After re-watching both Patriots and Bills game, the main Blame is Godsey IMO.

Using a majority of 11 personnel for RPO's is an unsuccessful recipe in the NFL.

You have a deep threat in Waddle and MOF attacker in Gesicki who are mismatch nightmares and not use 12?

Allowing Tua, Jacoby, or Reid see the defense on the field and instead of having pre-set plays. Tua sees the field best in shotgun, 12 personnel, and empty sets. He allows his playmakers to operate in space and distributes the ball.

Running 2 TE sets in 12 personnel seems like the best solution, with sprinkles on RPO and direct play calls emphasizing run or pass plays to help make it easier on the Offensive Line and the Quarterback.

Road to the Orange Bowl: Can Notre Dame come back to the ACC?
Scroll to top