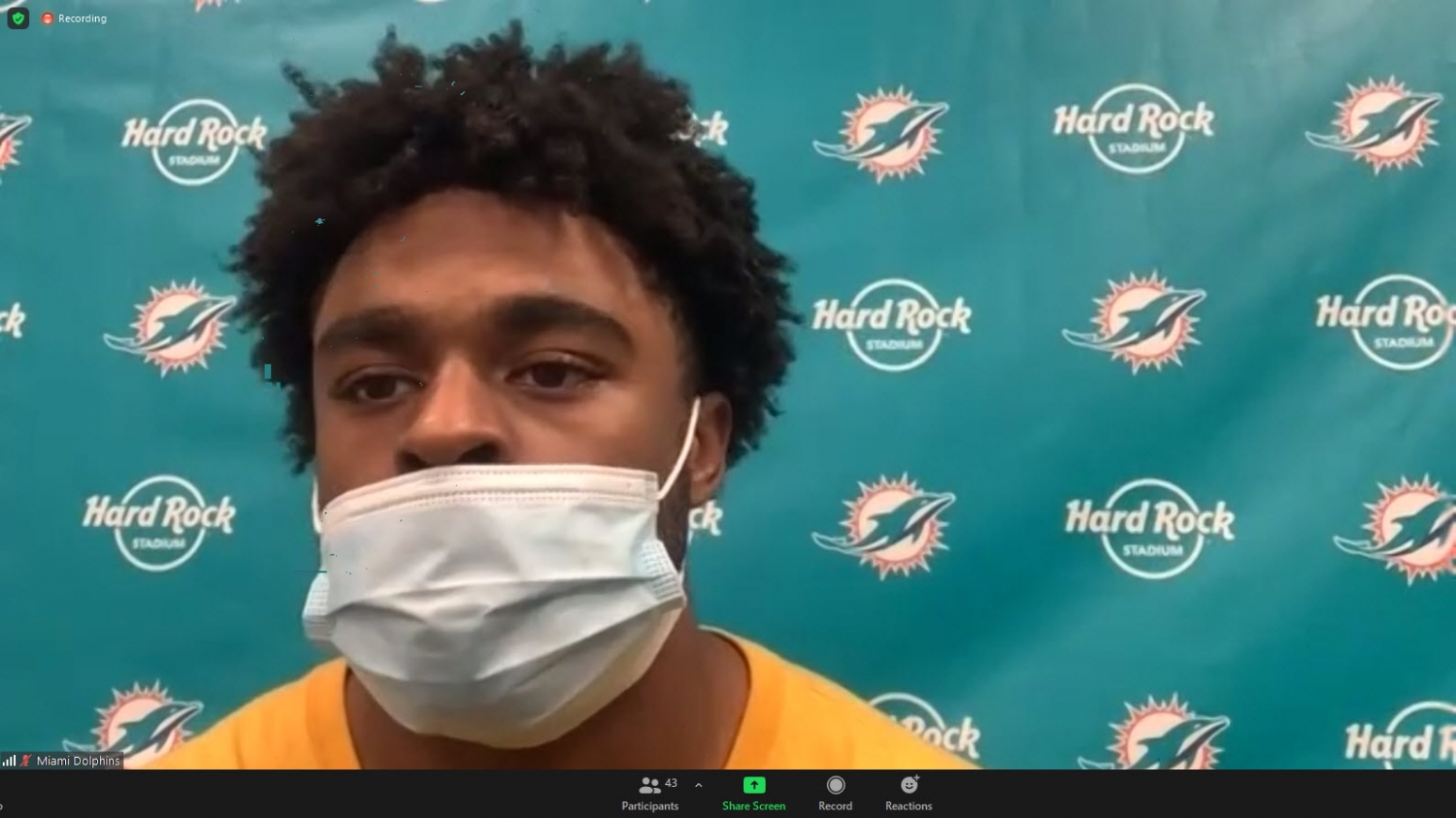 Miami Dolphins RB Salvon Ahmed has looked impressive in Myles Gaskin’s absence. Here’s why you should pick him up in fantasy this week.

Most years, I strut around my fantasy leagues like Connor McGregor, knowing damn well I’m the big dog at the top of the mountain.

But not in 2020. I’ve done terrible this year. Maybe I can blame injuries or unexpected illnesses, but at the end of the day, I just suck.

Which brings me to my point.

I don’t care if you’re in first or last place. PPR or a Tyrannosaurus standard league.

Go to your nearest fantasy league app and search the name ‘SALVON AHMED’. Then decide who on your roster is the weakest link, and smash that claim button without hesitation. Now do this for all of your fantasy leagues.

(NOTE: For those of you who are in dynasty leagues, you probably should’ve picked him up last week. But if you mistakenly passed on him, it’s probably not too late.)

Sure, there are a few other players you could consider.

Chargers fans would suggest Kalen Ballage. And though I do think he’s playing better, I’m not falling down that rabbit hole again. Some other free agent running backs to consider are Rex Burkhead and Devontae Booker. Obviously, every league is different. But you should be able to acquire one of these players, and Ahmed happens to be at the top of my list. (surprise)

.@miamidolphins RB @ahmedsalvon carried the ball 21 times for 85 yards & a TD in his first career start vs LAC. he added 1 catch for 5 yards.

But this isn’t rocket science.

If you’re a contender, who knows what might happen where you might find yourself in need of a running back down the stretch.

And if you’re not a contender, why not pick up one of these players to prevent one of your opponents from getting help down the stretch?

I don’t know about you, but I’d rather make things difficult for others than sit by the wayside and watch the weeks slowly pass by. Again, I’m not saying completely burn a nice waiver spot. But if you have the chance to improve your team AND make life difficult for those around, please do. There’s also a very good chance if you’re reading this, you’re a Dolphins fan, which gives you even more of a reason to make a move.

Last week, Ahmed carried the ball 7 times for 38 yards–which was the best we’ve seen from a Dolphins’ rookie running back in his NFL debut since Jay Ajayi in November 2015. Ahmed then followed that up by playing 44 (76%) of the team’s offensive snaps vs. the Chargers, on his way to 22 touches for 90 yards and his first career NFL touchdown. What’s most exciting to see is how quick and decisive he’s been with the football in his hand. Yes, Matt Breida could be back this week, and De’Andre Washington might get more involved in the passing game, but as we saw last week, Flores continues to ride the hot hand.

Miami’s RB coach Eric Studesville had nothing but praise for the rookies’ work habits.

studesville on ahmed: "the first thing that stands out is when he comes in the room, he's ready to go. he's highly motivated, asking questions, he wants to be good, he wants to work and he does that…he has speed, quickness, he has good eyes, good feet…he continues to develop"

In the end, this Dolphins backfield is hard to predict from a fantasy perspective. Some would say it reminds you of the stable of backs in New England and how they can attack you in a number of different ways. And I’d imagine that’s exactly the way Flores and his staff want it. So, while we all sit here and wait for the inevitable rookie running back in 2021, let’s enjoy what we have.

If you’re a fantasy football contender, put a claim in for Salvon Ahmed. If you’re not, you should too.

It should also go without saying, but if you have Myles Gaskin stashed on your roster, you should add Ahmed as a handcuff. No questions asked.

You can ultimately decide when and where to put Salvon Ahmed in your fantasy lineup, but this late in the season with very few options, he’s worth a dart throw for the Dolphins and your Fantasy football team.

Pressure Point: Dolphins find more than a QB—they find how to win

What Kim Ng Means for the Marlins
Scroll to top