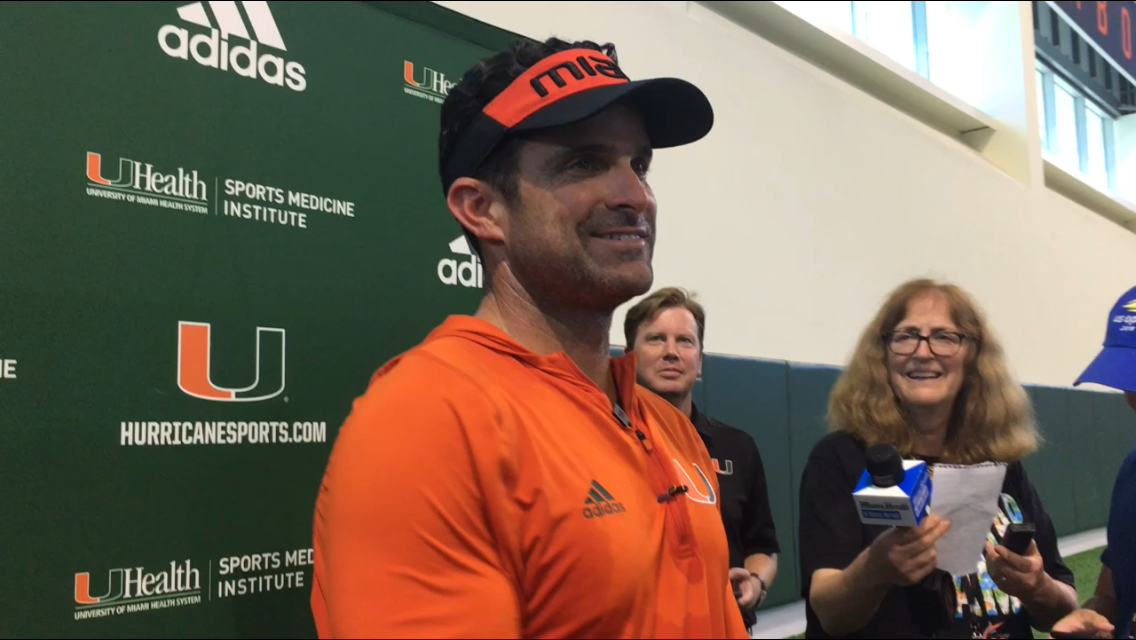 With just 14 days remaining before the Canes head up to Orlando to face Florida, many questions still surround this team’s roster. I break down what I feel are 3 major roster questions we want to be answered by the time tonight’s scrimmage is over with.

Let’s start with one of the biggest surprises in camp so far. Offensive lineman Zion Nelson was once thought of as a redshirt project with good skills that would need a few years to develop, especially at a very thin 240 pounds. Fast forward a few months and that 240-pound project is now weighing 290 pounds(reported by Nelson himself) and starting at LEFT TACKLE! Yes, you heard that right, LEFT TACKLE. I said to myself, Coach Barry(Offensive Line Coach) must be challenging his guys and we will see the real starting left tackle after the first scrimmage. But I was wrong. Nelson kept his job as LT1 and it seems as though it may stay that way. That means one of two things to me – this kid is really special – or we are incredibly screwed.

Two other guys to keep your eye on that could possibly get some playing time if Nelson can’t hold it down: Kai-Leon Herbert and John Campbell. Herbert was getting a lot of first-team reps at right tackle along with Campbell, who ended up starting on the right side during the first scrimmage. Look for one of those two to get the nod August 24th at right tackle.

Question #2: It’s the Muddy Badger and who?

We all know that Trajan Bandy is the leader in the Canes secondary. Bandy has the opportunity to be one of the best cornerbacks in the ACC. The question is, who will emerge as the other starting cornerback? Al Blades Jr. seems to be the front runner right now to start. He took first-team reps during last week’s scrimmage and has been atop the depth chart for some time now. However, I would not put sophomore DJ Ivey too far behind. Look for today’s scrimmage to be the one that helps solidify that spot.

The concern what’s behind those three. Young players like Nigel Bethel, Jr., Te’Cory Couch and Christian Williams will have to step up and be ready to play when their name is called. The key to this group being successful is health.

The safeties seem to be shaping up nicely. Yesterday was the first day of practice for USC transfer Bubba Bolden. The addition solidifies what is already looking like a strong group. Right now it looks like the Canes will start with Amari Carter and Gurvan Hall. Don’t be surprised if you see Junior, Derrick Smith get a lot of playing time after moving back to safety from the striker position. I’m tempted to mention Robert Knowles…nevermind.

Who will be the Miami Hurricanes starting quarterback? I am just going to get right into it. Offensive Coordinator Dan Enos is installing a brand new offense. None of the three have played in this system before and have all had growing pains. Some days Tate Martell does a few things better than the rest. Another day N’Kosi Perry and Jarren Williams make some really nice throws and Tate can’t hit water if he fell off a boat. All three are doing good things and not so good things. Let’s take one thing off the table right away, experience. Those making the argument that one should get the start over the other because of experience need to stop. None of them have experience! This is a new scheme, that none have played in before. And honestly, why do fans care so much about experience? Let me know how that worked out for Tua and Sunshine. I know these guys are not Tua or Lawrence, but there are plenty of young quarterbacks in college football that help their team win.

Jarren Williams is the most accurate according to many and throws with great touch. His knock was that he wasn’t very quick on his feet until Coach Manny Diaz said he was one of the guys that ran 20 mph in testing. Can he read and dissect plays quickly?

N’Kosi Perry can spin it. He has great arm strength, can run and escape the pocket and does like to chuck it down the field. His aggressiveness has also gotten him in some trouble before. He tends to take too many risks and makes dumb throws. Has he learned the playbook?

Tate Martell is a leader. His leadership and moxie, I think, are what make Martell stand out. He doesn’t throw the prettiest ball but can get it there. In my mind, he is the best runner of the three. His lack of accuracy at times could be a cause for concern. However, his rapport with former Bishop Gorman teammate Brevin Jordan and Buffalo transfer KJ Osborn are definitely a good thing.

I have a feeling Coach Diaz already knows who his guy is at quarterback. If he doesn’t, he will know tonight. The question is, will he tell the rest of us?

Al blades, Jr. or DJ Ivey (They will split reps) 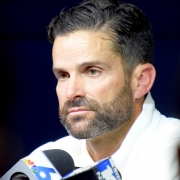 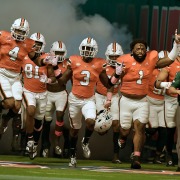 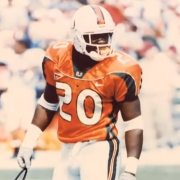 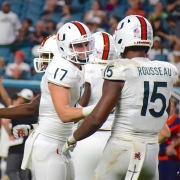 Brian Flores says this is ‘a big week’ in the quarterback compe...
Scroll to top