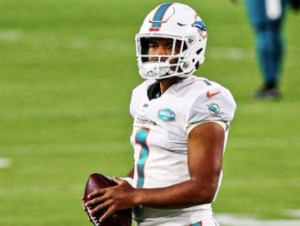 October 20th, 2020. The day came and Coach Flores decision to insert Tua into the starting lineup created shockwaves through the entire NFL and in a sense has created a paradigm shift that has it feeling like we are on cusp of being talked about on a regular basis. I know someone read that and are thinking the immense pressure being put on Tua is unfair for his first start, but the pressure was already there since April 23rd, 2020 when we drafted him higher than any other QB in Miami Dolphins history. After draft night we were universally received in the media as having made the right decision to draft him and that the next step was to get him healthy. Unfortunately, the decision to start Tua has not been as accepted as the decision to draft him.

Every and this is no exaggeration, every analyst has had an opinion on this decision. From how it was handled, to how Tua isn’t a complete year removed from his injury, how Our weapons aren’t good enough to help Tua and finally how our horrendous Oline will get Tua injured like in college. Having followed the Dolphins since 2004 I can firmly say that no singular player has had the media buzzing the way Tua has. Go down the line, Ricky Williams retiring and unretiring, Dante Culppeper being picked over Brees, Chad Pennington division championship year, Bradon Marshall being traded here and even the signing of Suh. None of the players or stories has created the type of national media frenzy the way the announcement to start Tua has.

Everyone from Collin Cowherd, Skip & Shannon, and all of ESPN (looking at you Mina, Dan, and Marcus) have all had a variety of opinions with most if not all being of the negative variety where they only focus on Tua’s injuries, the old perception of the Miami Dolphins having a terrible Oline, and the handling of the change of QB with regards to Fitzpatrick. I have to be frank that the overall lack of attention and knowledge to what truly is going on down here is appalling as this are people getting paid to make opinions without them even taking the time to find out the truth. Which leads me to post these 2 clips. One from Kyle Brandt and the other from Rich Eisen. The reason I chose these 2 clips is because they encompass my feelings toward Tua and what I feel like they are real expectations for what we can expect from him in first start.

My heart cant handle another 3 days of this https://t.co/4A0xtfL9RG

Ultimately as Kyle mentioned, Tua is going to become Mr. 7a, where he will be discussed and analyzed every Monday morning at 7 am. I will take it a step forward and say that I believe Tua will be Mr. 7a for the next decade. After almost 2 weeks having passed from the decision to start to Tua, I can clearly see that this is what it means to be nationally relevant. Maybe not to the level of the Big 3 with the Heat but there has not been a more buzz worthy QB in Miami since Dan Marino and with that comes scrutiny which we have only just begun to see. Welcome guys, this new era of Miami Dolphins football begins now, let’s enjoy the ride.