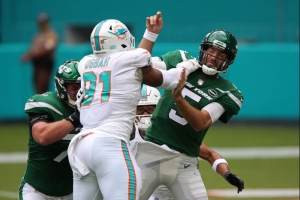 Stock Up & Stock Down

Welcome back guys to another installment of Stock Up Stock Down. In Week 6 of the 2020 NFL season your Miami Dolphins took care of business for the first home victory of the year against an inferior opponent in the New York Jets. For the first time since 2014 our Miami Dolphins pitched a shutout and ultimately came out on top 24-0 heading into a bye next week. With so much to dissect let’s dive right in:

I really went at Gaskin last week because of his lack of game changing plays and only being able to get the 2 or 3 yards that the offensive line got for him. A week of having a potential replacement in Le’Veon Bell come in must have been what Myles needed to get some extra pep in his step. All afternoon long he churned out tough yards by driving his shoulder and gaining extra yards to the tune of 5.05 yards per carry. In total his 126 yards from scrimmage became the first Miami Dolphins RB to pass 120 yards from scrimmage since Kalen Ballage did it in December of 2018.

After spending some time on my twitter this week analyzing Eric, I think I may need to spend some additional time this week on him because he was literally everywhere on Sunday. Totaling 9 tackles, 7 solo, and 1 PD for good measure as well. A week after shutting Kittle down and after a game like this his confidence, and rightfully so, is through the roof. Eric can cover in man or zone; he can play in the box and stop the run. Game after game Eric shows us that not only does he belong as a starting SS in the NFL but that he also belongs in the conversation as top 10 SS in the game.

The return on investment on the defensive of line has been a slow and steady one that in recent weeks has really begun to turn the corner. This was one of Christian Wilkins best games of his young career finishing with 5 tackles, 1 sack, 1 TFL, and 1 PD! A busy afternoon for 94 before you stop to consider how he runs into the field each time the offense scores a TD or when he jumps over teammates:

How athletic can you be at 315 pounds. Wow pic.twitter.com/24J1j9zfsV

Another investment that’s paying off is Emmanuel Ogbah. Slowly without even realizing Ogbah is leading us in sacks with 5 which is significant because Taco Charlton lead us last year with 5 sacks total all year whereas it only took Emmanuel 6 weeks. Another key stat on Ogbah:

Emmanuel Ogbah is tied for 4th in the league in sacks with 5 pic.twitter.com/vYyN0mnCdB

I hope people realize that this is the Xavien Howard the Miami Dolphins made the highest paid CB in the game 2 off seasons ago (perfect timing as other higher priced contracts came and have left this one looking pretty team friendly). After a slow start to the year that included a disaster of a performance against the Buffalo Bills, where every pass that went his way was completed, Xavien has recorded an int in every game since. He now has a total of 4 interceptions on the year which is tied for the league lead. Every year Xavien has shown us what a true shut down and ball hawk corner he can be when healthy, let’s hope his health continues the way it has this year.

I truly struggled to contain my excitement in waiting to write about how we finally got to see Tua Tagovailoa touch an NFL field. In a moment that truly felt like one of those moments that everyone remembers exactly where they were when it happened. With 2:27 left in the 4thquarter and the score 24-0, Coach Flores finally made the decision to let us see the kid play and he did not disappoint. Some may question what a QB could do to really impress in that situation and moment in the game. Let me explain that while the Dolphins were indeed up 24 points against the lowly jets, heading into the final drive we were an abysmal 0/8 on third downs for the day. First play a gorgeous looking handoff (lol) to Breida for 1 yard. 2nd down Gailey played to Tua’s strength and rolled him out to his left where he hit Patrick Laird for his first completion in the NFL for 2 yards leading to a 3rd and 7. Tua from shotgun took a 3 step drop, saw where the blitz was coming from, knew that he had to look the safety off to give Jakeem the wide open area needed to get the first down. I am foaming at the mouth to get my eyes on the All-22 and see what happened over and over and over.

On top of the fact that Myles actually found some success, a second week in a row does not bode well for Jordan’s long-term outlook here. Unfortunately, because Jordan does nothing on special teams and Myles being given work horse duties, Breida is the obvious choice because of his special team history. Injuries aside I do not see how Howard eventually earns himself some playing time.

2 weeks of a clear number 2 RB duties and Breida has failed to make little to no impact. 15 carries for 43 yards comes to 2.8 yards rushing per attempt which is dreadful without needing analysis. This week we had Le’Veon Bell as a headline for possibly coming to Miami and really could have been an excellent acquisition if able to pull off but unfortunately it did not so we will have to do with what we got unless Grier and the Front Office decide to make a move over the Bye Week and before the trade deadline.

Last week was given a clear shot as a replacement for Shaq Lawson and thrived in that role. With Shaq back this week and KVN out, Flores decided to try to put AVG in KVN spot to start the game which lead to some terrible penalties and overall sloppy play. This lead to a limit of AVG snaps on the game with only 17 plays on defense which was only 24% overall. Van Ginkel will need to sharpen his overall game as he as being tasked to be the swiss army knife that can line up anywhere and do anything to throw off an offense.

Its mind boggling to see a team that was up 3 scores for well over half the game and that also did not give up a single point can also still allow a team with no passing game threat to go for 124 yards rushing on 5.2 yards per carry. Last week the same thing happened where if the other team has a lead, they probably gut us for 200+ yards rushing. Against inferior competition like the Jets things like this may slide but no that we are 2nd in the AFC East, we can start to seriously entertain the thought of meaningful games in November and December.

For the second straight week the Offense has been unable to keep the momentum of the first half flowing into the second half. This week after being up 21-0 heading into halftime the Ryan Fitzpatrick lead offense was only able to score a field goal for 30 minutes of play. All game long Fitzpatrick was either unwilling or unable to take shots to his weapons outside of DVP who had 8 targets but only 3 catches. What compounds the problem is that I have never seen a game that a team can be up 24-0 and on the final drive still be 0/8 on third down. As much as we love Fitzpatrick and everything he does and stands for, eventually we will have to realize that Tua accomplished in 1 drive what Fitz could not do all afternoon long against a winless and lifeless New York Jets team.

Overall this win puts us back at .500 for the first time all year heading into a Bye Week where we get time to prepare to host a LA Rams team that will be traveling cross country for a 1pm game. Till next time guys, Fins Up!

This was written By: Juan Cardona