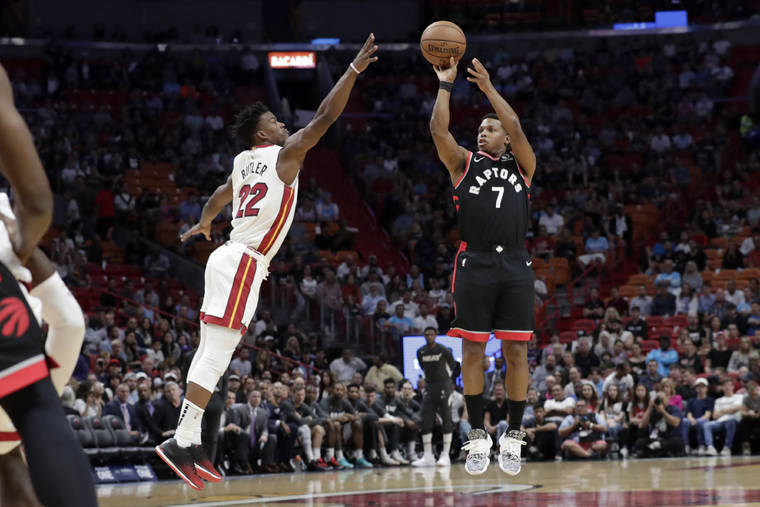 Kyle Lowry’s fit with the Miami Heat isn’t just being discussed because he’s the Godfather of Jimmy Butler’s daughter. Of course that’s the starting point, since it draws interest from a player like Lowry, but it seems like there are many more reasons for this to be a seamless fit.

The Heat have a bunch of needs, and when evaluating Lowry as a player, he fills a bunch of those things that Miami has missed. That is exactly what we will be diving into here. Aside from the exact numbers in a contract and surrounding pieces, what would he give Miami next season?

Before talking Lowry’s strengths, the Heat’s weaknesses must be highlighted. Something I’ve talked about constantly is Miami’s lack of a pick and roll ball-handler. They had a guy in Kendrick Nunn who can get to the mid-range. A guy in Tyler Herro who can make the occasional pull-up triple. And a guy in Goran Dragic who could drive hard to the basket for a physical bucket.

But they don’t have somebody who can do more than one of those things.

When looking at that first round series against Milwaukee, a major key for their struggles was that certain player’s area of weakness became apparent rather quickly. The Bucks forced the Heat to take shots that they gave them. And well, Lowry navigates offensively on his terms.

In the clip above, we see Lowry run the PnR, leading to a lob and finish, but that aspect I’m going to dive into a little more down the line since that’s probably the most important part of the offensive fit. But staying on this topic, 28th in PPP when the ball-handler has the ball in the pick and roll would not be the case if Lowry was dissecting defenses.

The reason that most of the clips you’ll see in this piece are from the Raptors-Lakers game is to show that pulling highlight moments isn’t the point of this explanation. In fact, this game was Lowry’s last game of the season, showing that this is very recent film. Spoiler alert: he finished that game with 37 points and 11 assists.

Another missing piece to this Heat offense is a secondary attacker, which has been harped on all season, then exposed come playoff time. When a team cuts off the head of the snake, in Jimmy Butler, there’s nobody else to attack in space. Combine that with the constant off-ball denial the Bucks through at Miami, and you have a very troubled offense.

Not only is Lowry a capable attacker, he’s a physical and ruthless attacker. Those two things translate to a good amount of free throw attempts, which took a bit of a dip this season from the year prior.

We all know that’s what Butler’s game is based on as well, which makes that combo so interesting. Something that’s always mentioned is that Butler plays at his own speed, and a major reason for that is he can slow the game down by turning it into a free throw competition. Lowry mirrors that same play-style, and I think that can benefit the franchise centerpiece.

Bam Adebayo improved in every area of his game this season, but of course, many seem to harp on the post-season lack of aggression more than anything. That aside, there’s no doubt he’s in line for another step forward with his offensive game. And the best way to propel that is to put two savvy vets next to him to control the pace, and allow him to play his game.

We’ve seen Butler’s gravity give Adebayo plenty of open elbow jumpers, and it feels like Lowry can bring that same element. Allowing Butler to get some rest in a game without the whole offense crumbling means that Lowry and Adebayo’s chemistry will be huge, and both of their play-styles feel like they would mesh well.

On my list of off-season needs, I had point guard very high. This kind of goes hand in hand with the PnR ball-handler discussion, but this expands even further. Why is that? Well, just take a look at the clip above.

Lowry is moving downhill with his roller, one defender trailing and the other containing. He stops at the free throw line, jabs and uses a ball-fake to force Montrezl Harrell to drop. They both fell for the fake, and it gave Lowry more than enough space to pull-up into a shot that he’s made plenty of times over his career.

But, Lowry is always reading a defense one rotation ahead. He saw LeBron James duck all the way into the paint for a possible tag/cut-off, and Markieff Morris rise with Pascal Siakam which eliminates his ability to split the difference with the corner. Lowry makes the pass to the corner for an open triple.

The reason that I’m diving into this play so deeply is because this is what the Heat miss. It shouldn’t be Butler and Adebayo creating for others each and every play, since that just restricts their own effectiveness in the offense. Yes, they will also look out for others as play-makers since that’s their game, but at times it seems like they’re forced into that role.

With that passing ability and those different offensive scoring techniques, it allows Erik Spoelstra to be much more creative in how he chooses to run his offense. If they retain Duncan Robinson, as I expect them to, they can diversify their sets a lot more with a point guard of Lowry’s caliber.

After hitting on a bunch of his ways of scoring, it’s important to note the part of the offense that is essential next to Miami’s two stars. When you’re two best players aren’t good three-point shooters, that third acquisition has to have that ability in his bag.

He has just that, and while we’re discussing Coach Spo’s creativity with him, this is where that comes into play. When looking at the clips above, we see Lowry’s ability to score off the dribble with step-backs, side-steps, and obviously, the pump-fake until the defender jumps technique.

He got the foul call and knocked down the three, which is not something we’ve seen a lot of this season since most of Miami’s triples occur with off-ball screening, dribble hand-offs, or pick and roll pull-ups.

But that’s not why Spo can get creative, since it’s the second clip that brings that point alive. After an offensive rebound, they reset offense and Lowry comes off a DHO for a three. Having a player that is a threat off the dribble, as well as off the ball is quite the player to add to the offense.

Although I’m showcasing a DHO that ended in this fashion, he seems so comfortable in that set since he loves to play-make on the move. The over-the-head pass from the wing to the elbow was his biggest strength in that action, and well, we all know who would be stationed at that elbow: Bam Adebayo.

How does Butler Benefit?

Adebayo’s been a sticking point within the offense during this Lowry discussion, but how would Butler actually benefit? Other than the stuff about a secondary attacker and a guy who can control lineups when he goes to the sideline, I see the most effectiveness with them running stuff together.

We saw Dragic-Butler PnR’s become one of their best offensive sets in the regular season, which just shows the way they were trending offensively. As seen above, Dragic would usually lob it up to Butler as high as possible, knowing he’d climb the ladder and come down with it at the basket.

They also ran a bunch of inverted PnR’s with Dragic as the screener which worked just as well. Dragic setting the angled screen for Butler to go downhill with a guard switching onto him always ended in a positive result.

This is important to note because Lowry/Butler combinations can be even more effective. He’s a craftier passer when getting in the mid-range area, since it’s not just the lob pass that is the option. He also has a quicker pull-up that constantly keeps defenders on their toes. They both have had major success in that area over their careers, which makes me think we’d see plenty of lineups with 3 floor spacers to give them two the middle of the floor to go to work.

This entire piece has been offense driven, mostly since that’s where the actual fit can be discussed. As a whole, we already know what Lowry brings on the defensive end at the point of attack, which makes the acquisition even more intriguing.

He’s physical with opposing guards, he can force them to become frustrated, and even has success in the post with his wide frame. All of these elements lead to something that Miami lacked for most of the season which is transition offense.

Referring back to Lowry’s ability to get to the charity stripe, a lot of that comes from fast-break opportunities where he takes the contact to get some points. Miami’s guard play this season was a lot of avoiding contact to try and score, which becomes an issue when things tighten up in the post-season.

As showcased in this piece, it’s clear that Lowry’s fit is much more than a relationship with Butler, but well, that’s where this topic stems from. They know that they have a good shot at him due to the fact it’s intriguing to come play with a player and an organization that shares the same mentality that he does.

The next step would be to round out the supporting cast to become an Eastern Conference contender, but that’s a decent start. We’ll see what happens with that type of stuff as we approach the off-season, but for now, one thing is clear: Lowry can change a bunch of things for the Miami Heat. 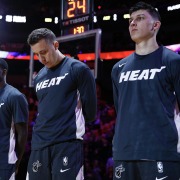 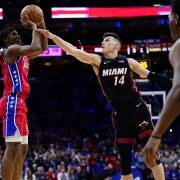 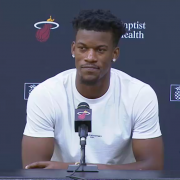 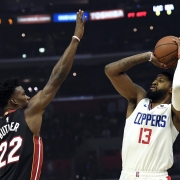 The Jimmy Butler-Paul George Debate is Over, But Now There’s a New One