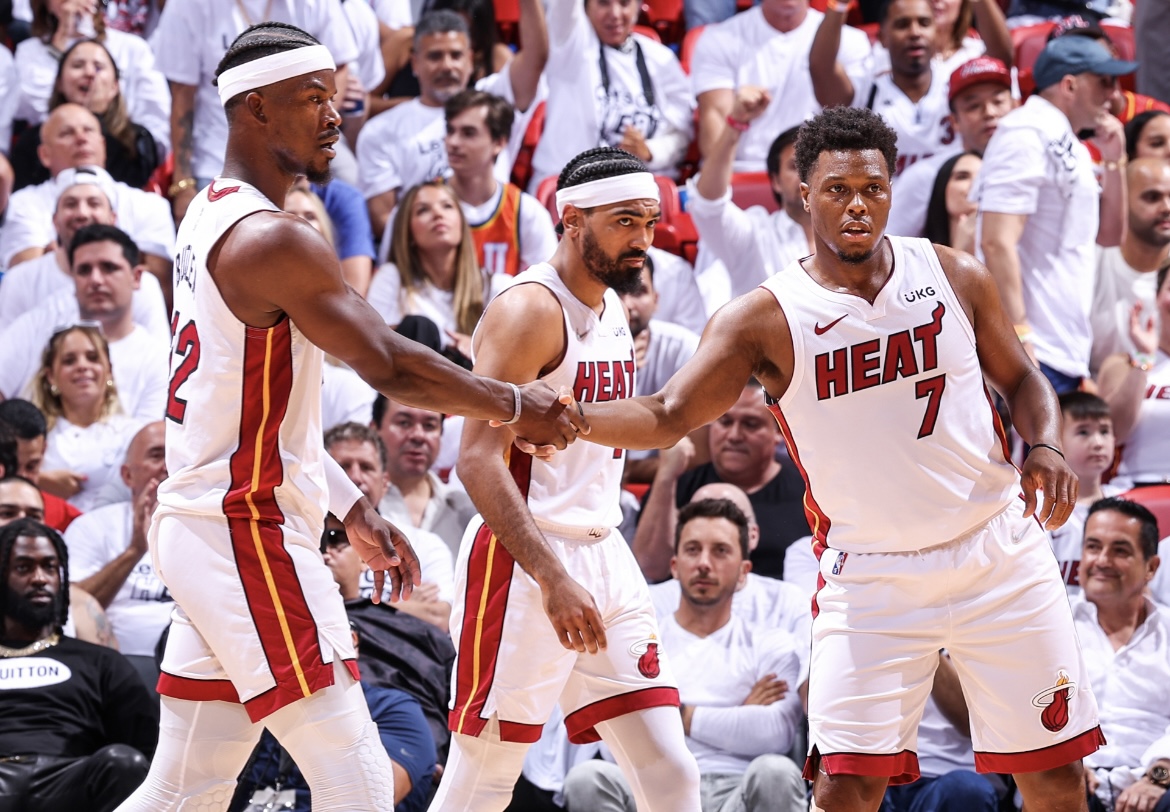 Looking through some of the story-lines of the Miami Heat’s first two playoff games against the Atlanta Hawks, the orderly focus is pretty clear.

At the top of the primary topics, Jimmy Butler sits there coming off his 45 point performance in game two.

Right after that, the role players in general are probably next in line, as Gabe Vincent, Duncan Robinson, and PJ Tucker have all had moments to push Miami in the correct direction.

Rounding out the top 3, I’d have to say that’s where Bam Adebayo and Tyler Herro slot in. They haven’t had the greatest games so far, which isn’t a worry right now since they’ve been winning, but there’s attention on that young duo as they progress in this post-season.

That’s a lot of names on one team, and notice how Kyle Lowry’s name wasn’t mentioned once. That’s pretty much how it goes many nights, since he isn’t that flashy scorer or big time box score guy.

If you were to strictly watch the sports shows that come up on national TV, you may have heard adjectives to describe Lowry’s season as “underwhelming.” One might draw that conclusion from not watching the games and simply looking at the 37 year old’s 13 and 8 line on the season, but let me just say, you aren’t watching the games correctly if that’s your takeaway.

One of the main differences between this team and Miami’s recent playoff rosters, aside from better defensive personnel and growth from young guys, is that they have a constant leader on the floor who also plays the point guard position.

Specifically in game one, you could just feel it in the arena that he had complete control over this Heat team, both on the floor and off to the side on the sideline. Yelling, cheering, giving instructions to guys on the floor.

But what has made his impact on the floor so great beyond the numbers?

When diving into Lowry film at any point in his career, it’s always the simple things that stand out. A simple pass, a simple screen, a simple read.

And speaking of reads, that has been on complete display as they’ve protected home court. We know that he’s one of the smartest point guards in the game, so of course he can do it, but the speed to actually process it has jumped out.

Looking at the play above, Lowry’s mindset is ‘okay, you want to switch late and* go under the screen on me.’ He positions himself behind the screen and fires away. With the scoring threats of Butler and Herro on the floor next to him late in games, these delayed gaps will be there.

We know he recognizes them, but taking advantage is the “real season” development.

Now we swing in the opposite direction, since there’s a bit of an overplay happening here.

Butler tries to make a play off the attack, but the slight collapse leads to a kick-out and retreat. For your own sake, pause the play above as soon as Lowry catches the ball. Trust me.

Strus doesn’t space out, Tucker aligns in the strong-side corner, and Butler sits right on top of all 3 of them. Poor spacing late in the shot clock, so a contested perimeter shot should be the outcome, right?

Lowry notices this as well, so he snakes inside to try and create some movement for the other guys by getting two feet in the paint. As he does this, he finds a gap of his own and uses the rim as his shield to finish with the right hand scoop.

That may be looked at as a normal attack and lay-in, but that’s Lowry’s reads in a nutshell. Creating something out of nothing.

Now for the last example of his decision making, it must be said that although he’s one of the league’s best passers, his play off the ball is just as effective, and more importantly, his crisp and timely movements are just as aligned.

On this possession, Herro takes the screen and flows downhill with two shooters spaced on that strong-side. If things don’t go as planned, that could very well be the formula for a crammed possession, but Lowry doesn’t observe, he acts upon it.

Slowly sliding and being linear with the ball is so important, which is something that Delon Wright wasn’t ready for as he got caught ball watching. Herro feeds Lowry which probably could’ve been a corner three, but now he works it inside.

Bogdanovic looks like he’s going to double now, but Lowry waits the extra second for him to retreat to Herro on the perimeter. Puts up the shot and buries it.

There are certain actions that work better against specific teams. Bam Adebayo as the roller or Tyler Herro as the ball-handler will be very useful vs certain drop bigs, as we’ve seen be highly effective all season with those two.

But at this moment in time, the Lowry-Butler actions are the way to go. Not just because those guys are simultaneously rolling, but due to the fact this match-up allows it.

For example in the clip above, it’s a spaced out PnR for the two at the top of the key. Trae Young wants no part of the Butler switch, so he fights through and Lowry feeds Butler in his spot.

Due to the fact they’re fighting over screens, Butler now gets to play a game of 1-on-1 at the free throw line following the catch, bringing back flashbacks of his week of preparation of 1’s in practice with Udonis Haslem, PJ Tucker, Caleb Martin, and others.

He drives, pump-fakes, and gets the and-1 in effortless fashion.

But that all starts with the recognition of Lowry. Not waiting for Butler to roll all the way down the slot so he can feed, since that would allow corner defenders to collapse. Not taking that extra dribble for an entry post pass to Butler, since that eliminates the action’s momentum.

Just hitting on that short roll for his game to be maximized. We know about their relationship off the floor, but the combo of them on the floor is much greater than full court touchdown passes in transition.

Manipulating the Defense on the Attack

By that I mean his way of putting guys in the correct positions to score is by selling the movement that he has an ability to get a bucket himself.

Looking at some of the plays above, let’s go through them a bit. In the first one, Lowry takes a wide angle on the drive since Bogdanovic does a good job sliding his feet, but in his head he knows the left hand lay-up in traffic isn’t what he’s trying to get to.

He just needs to get as deep into the teeth of the defense as humanly possible, so Danilo Gallinari’s left foot doesn’t leave that left box. Now he kicks, Gallinari tries to recover, and it’s a bucket for Tucker and an added assist for Lowry.

In the next clip, it’s the same thing, except instead of Lowry manipulating the strong-side corner, he’s doing it to the weak-side corner.

Knowing he can get by Young in isolation, he just awaits Bogdanovic to pull all the way down. Gallinari doesn’t split the difference on the shooters, Bogdanovic scrambles, and it’s a Vincent three/another Lowry assist.

Last example, the final clip ties a lot of previous points together. Lowry-Butler empty corner PnR, as Young once again is doing everything in his power not to switch onto Butler. Lowry knowing this bursts down the left side, playing for that help and manipulating the weak-side defenders.

Three collapse, he looks in Strus’ direction to move Huerter away from the corner, like a quarterback moving that safety, and hits Tucker for the corner three.

Everything is calculated with this guy.

You can have fun talking about the game by noting the job Miami’s shooters have done or how “underwhelming” Lowry’s numbers have been, but he’s the reason they’re getting these looks. He’s the reason the offense doesn’t look problematic at the moment, while noting the Hawks defense definitely makes this offense look much smoother in itself.

Specifically in game one, Miami found the perfect gaps in Atlanta’s defense, which all revolves around perimeter play. They over-play hand-offs or pick and rolls, and guys like Tucker can shift the entire game, which is exactly what he did.

I asked Tucker about being the release valve killer, and the developments that occur schematically on these possessions, which he responded, “Somebody like Bam is rolling and you gotta tag, you get that one second for the three. Or the hand-off with Tyler or Max or Kyle, where you gotta be up for a second then hit the pocket. So it’s just the timing of the helps and passes being on time, and making the next play if somebody steps…Just the progression of plays and making the right play.”

All of that schematic stuff said, it looks much simpler when Tucker is out there physically doing it. Part of it is that it’s muscle memory, and the other part of it is that Lowry just makes things much easier for others.

The first clip above is the perfect example. Quick hand-off from Tucker to Lowry as he was just noting, and it’s another instance of Young being petrified of that switch. With Lowry sinking and pulling them fully away, Tucker smartly pops instead of sitting. An open corner three is the product of that.

The Heat have a ton of release valve guys that include Tucker, Adebayo, or even a smaller guard and shooter like Vincent, but release valve finders are the harder part of this formula. You can create advantages offensively all you want, but if the guy can’t feed those open slots in different scenarios, they’re pointless.

It should also be noted that Lowry’s defense has elevated heavily over this two game stretch as well. Not only bothering Young around screens or picking his pocket to head in transition, but he’s guarded a bunch of different positions.

The Heat obviously switch everything so he will end up on bigs at times, but they’ve pretty much scoped out the fact that match-up isn’t a loss for Lowry and the Heat. His denial on guys like John Collins and Gallinari has been huge, and let me randomly, and oddly, mention that had 3 blocks in game 2 on Tuesday.

I don’t know what the expectation was of Lowry’s numbers when he mentioned the “real season,” but that comment only made me think of letters. And those letters are W’s.

He’s been huge in Miami’s two wins, and that’s while going 2 for 8 from the field in game two. His stats may not match Butler or Herro or Bam over this run, but his impact will be right there, if not higher.

Mindsets are aligned, but more importantly, this group’s on-court play is aligned which all starts with this team’s point guard, Kyle Lowry. 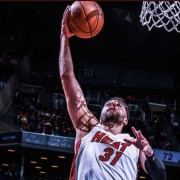 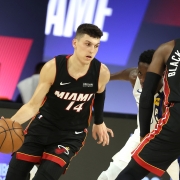 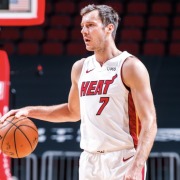