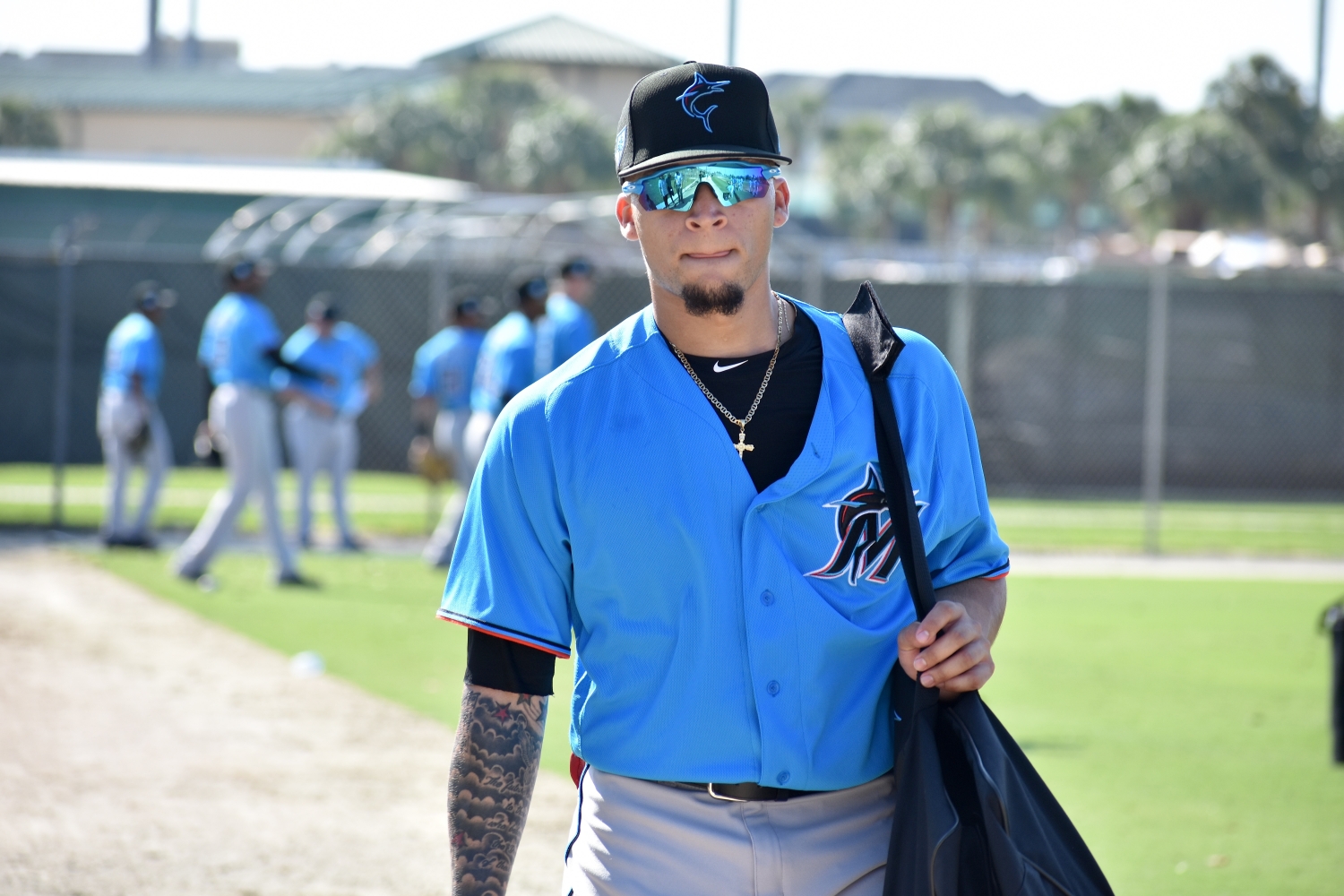 The Miami Marlins haven’t seen the field in a week and won’t do so again until at least Tuesday. We hope. The Marlins have been dealing with the league’s worst COVID-19 outbreak, and while some thought it was an isolated issues for MLB, other teams, like the St. Louis Cardinals, have seen their own issues with the virus crop up.

The Marlins hold first place in the NL East despite playing only three games this season. If they’re going to keep that position or challenge for a spot in the playoffs, they’ll need to navigate the coming days and weeks carefully. Here’s a look at the latest with the Marlins Outbreak.

Buses Home, On To Baltimore

With 21 members of the organization, including 18 players, testing positive for COVID-19, the Marlins outbreak seemed on the brink of cancelling their season. The team remained sequestered in two Philadelphia hotels this week, but on Friday, they finally got MLB approval to transport the sick players home via sleeper bus.

They’ve since arrived in South Florida, where they will be quarantined. Thankfully, none of those who have tested positive with the Marlins have reported major symptoms.

Harold Ramirez told Telemundo this week he doesn’t have a cough anymore and his body aches have gone away. Miguel Rojas took to Twitter on Thursday to thank fans and supporters and say he can’t wait to get back on the field to represent Miami.

While the recent round of negative COVID tests is good news, the Marlins remain in a holding pattern. The healthy Marlins are still in Philly, as MLB has postponed their games through the weekend.

The current plan is for the Marlins season will resume on Tuesday in Baltimore. They’ll play four games there in three days, then likely move on to play the New York Mets and then Toronto Blue Jays, who are playing home games this year in Buffalo, NY.

Don’t look now, though. Isaias might have other plans.

The Marlins are scheduled to resume play in Baltimore on Tuesday, the same day Tropical Storm Isaias is forecast to affect the area. pic.twitter.com/tAgDlHsbSR

One of those roster holes will be filled by LHP Richard Bleier. Miami acquired Bleier from the Baltimore Orioles for a player to be named later or cash considerations. The 33-year-old was born in Miami Beach and grew up in Davie. He attended South Plantation High School and Florida Gulf Coast University.

He made his MLB debut in 2016 with New York Yankees and has pitched the last three seasons with Baltimore. He owns a career 8-1 record and 2.99 ERA and 1.20 WHIP in 177.1 IP working almost entirely out of the bullpen. This season, he’s appeared in two games and did not give up a run in three IP.

The left-handed pitcher relies on sinker and cutter, with a fastball, curve and slider, too. His ability to locate, induce ground balls at a 59-percent rate and surrender hard hits only 21-percent of the time, will help the Marlins bullpen.

Bleier said via Instgram: “I’m excited for the next chapter of my career heading home to Miami!”

@orioles fans I just wanted to say thanks for the support over the last few years! It’s been an incredible journey with ups and downs but I appreciate every moment. It was truly an honor to be able to represent the city of Baltimore on the field. I’m excited for the next chapter of my career heading home to Miami!

On Saturday afternoon, the Marlins also acquired RHP James Hoyt from the Cleveland Indians in exchange for cash. The 33-year-old Hoyt pitched three years for the Houston Astros before joining the Indians in 2020. He sports a 4.16 career ERA with 104 strikeouts over 80 IP. Hoyt had been designated for assignment on July 28th.

Isan Diaz informed the Marlins that he’s opting out for the remainder of the 2020 season. Here is Díaz’s full statement, posted to his Instagram Story:

“This has been a tough week to see so many of my teammates come down with this virus, and see how quickly it spreads. After much deliberation and thought, I have made the difficult choice of opting out for the remainder of the 2020 season. This has been a decision that I have discussed with my family, and I feel it’s the best one for me and my overall well-being. I will deeply miss my teammates and competing on the field. I wish my brothers the best and look forward to taking the field again with them soon!”

Diaz’s memorable debut came on Aug 5th when he homered off Mets ace Jacob DeGrom, much to the delight of his father who was being interviewed on camera by Fox Sports Florida’s Craig Minervini at that moment. However, it was an underwhelming 2019 for him in the MLB after tearing up Triple-A. Diaz finished slashing .173/.259/.307 with five HR and 23 RBI. He struck out 59 times in 201 PAs.

In 2020, Diaz went 2-for-9 with three strikeouts, but made solid contact on several at-bats.

Mattingly called Diaz the Marlins’ second baseman “now and of the future.” He’ll lose whatever development may have come this season, and if he’s not the one, there are a couple of intriguing prospects behind him. Jose Devers, the 20-year-old lefty who came over as part of the Stanton trade, is one and Joe Dunand, a 24-year-old Miami native who went to Gulliver Prep and the nephew of ARod, is the other.

MLB Season on the Brink

MLB Network’s Jon Heyman reported today there are no new Marlins positives from yesterday’s tests. They’re holding at 18 positives for now. But a new rash of positives have sprouted within the St. Louis Cardinals organization. The Cardinals have had six positive tests over the last couple of days, three players and three staff members.

MLB commissioner Rob Manfred told MLBPA executive director Tony Clark on Friday that if the sport doesn’t do a better job of managing the coronavirus, it could shut down for the season.

According to ESPN’s Jeff Passan, the conversation between Manfred and Clark was “not a threat but a reality check that was relayed to players — and has spread quickly among them: We — all of us — need to clean this up, because if we don’t, Major League Baseball in 2020 is going to be over.”

Manfred has since backtracked off that position some, saying he’s “not a quitter.”

MLB commissioner Rob Manfred believes the 2020 season can continue despite positive coronavirus tests that have led to the postponement of 17 games in 10 days. https://t.co/sJ8xlHpSMF pic.twitter.com/ImVIUJtoWt

This weekend is seen as a crucial juncture for the sport, both in terms of hoping for a limit of positive tests and in players abiding by protocols. The Marlins outbreak could be the defining development of the year.

On Monday, the team announced the addition of two pitchers via waivers, RHP Justin Shafer and LHP Josh D. Smith. Shafer is a South Florida native and Smith pitched for the Marlins in 2019.

A day later, the Marlins announced they claimed RHP Mike Morin off waivers from Milwaukee. Over a six-year MLB career, the 29yo Morin has appeared for five different clubs, posting a 4.65 ERA.

Wilkin Castillo’s signing signals the return of a former Marlin. Castillo spent most of 2019 with the Marlins’ Triple-A affiliate New Orleans, but he played two games for Miami. He went 1-for-7 with two RBI. His 6/22/19 start came nearly 10 years to the day (6/20/09) of his last MLB appearance.

Pat Venditte‘s signing brings back the “switch pitcher” after he was with the club in Spring. 35yo Venditte has the ability to work off the mound with either arm, depending upon the handedness of the hitter.

Venditte’s career ERA sits at 5.03 over 68 innings pitched. He’s another MLB-experienced arm to add to a Marlins pitching staff that must have been decimated by the COVID outbreak. 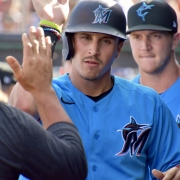 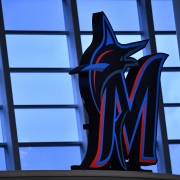 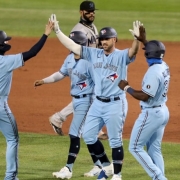 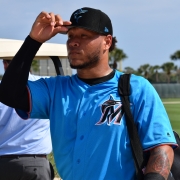 The Isan Diaz dilemma: when should he get the call-up?
0 replies