Manny Diaz’s recruiting class in 2020 has welcomed a lot of great prospects. Even with a 6-7 season, the Miami Hurricanes have reloaded the roster with talent. In particular, the safety position has three newcomers who should be able to make an impact.

Saturday, they received a commitment from four-star safety Kamren Kinchens The local product out of Miami Northwestern High announced his commitment to The U on Saturday. In doing so, he becomes the fifth Bull in the 2021 recruiting class. He picked Miami over the likes of Auburn and Texas A&M.

He is also the first safety commitment in his class. The 2021 Miami Hurricanes recruiting class is looking strong. They are ranked 12th nationally and third overall in the ACC per the 247Sports Team Rankings.

Currently, the highest-rated commitment in the ’21 class is wide receiver Romello Brinson. It’s worth noting that the 2021 class is aligning very similarly to last year’s class.

Last year, their class ranked second in the ACC. In terms of the 247Sports average rating, they clocked in with a 0.9006 rating last year. This year, they have an 0.8837 rating.

Last year, he had 74 tackles and 10 interceptions for Miami Northwestern. When you watch his film, he is a hard-hitter. He also possesses tremendous vision. He makes a break for the ball as soon as it is thrown, and often settles underneath it nicely for an interception. Opposing quarterbacks would be wise not to throw his way on the field. He is truly a playmaker on that side of football.

It would be unfair to compare him to Miami Hurricanes great Ed Reed. However, he has that same type of playmaking ability. I’m not saying he will be the next Reed, but he will eliminate the middle of the field for Miami defensively.

This is a another notch in the belt for the Miami coaching staff. Diaz has done a great job of rebuilding this program this entire offseason. it will be intriguing to see what move comes next. 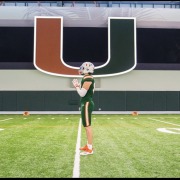