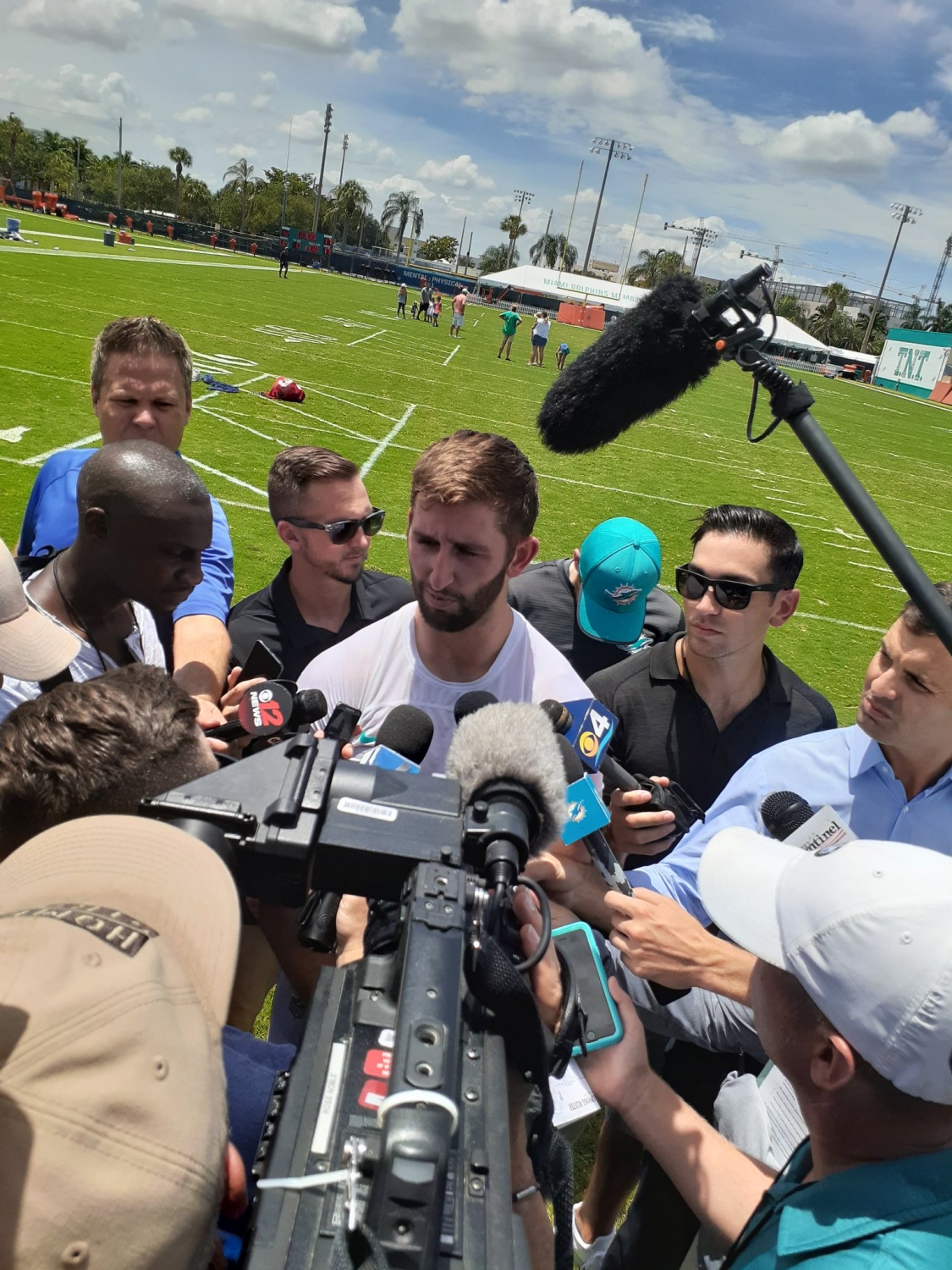 – Some ominous clouds on the horizon. Does Flores take them into the bubble? We might find out today. Doesn’t strike me as a “bubble guy”
– Coach Flores comes in for what should be an eventful presser.
– It’s up to Minkah, whether he plays every down this year- Coach Flores
– The easy decision was to do nothing and hope that things get better (Flaherty firing)- Coach Flores
– Googs is a guy I had targeted for my OL coach- Coach Flores
– It was a hard conversation (with coach flaherty) , but I went with my gut- Coach Flores
– We want tough, smart Offensive linemen that can communicate- Coach Flores
– (On QB battle) I think it’s an ongoing competition, but Ryan Fitzpatrick is leading the way- Coach Flores
– Leadership, efficiency, rapport with teammates is why Ryan leads the battle- Coach Flores
– You know how they say…”first to show up, last to leave”?…..well, first player out for warmup….Ryan Fitzpatrick
– Today has been an Audio and Optics disaster for Josh Rosen, and practice has not started.
– Fitzy and Rudock out here, Rosen is not. So far
– Josh Rosen joins 10 minutes later.
– Special Teams work to start practice. Team warmup soon thereafter.
– 11v11 snap work to start.
– New starting right side of line? Calhoun at RG, Davis at RT?
– Shaq Calhoun reminds a bit of Harry Galbreath. Remember him?
– Will Holden gets work at 1st team RG as well.
– A nice cool Breeze comes in. Pleasant weather today.
– Michael Dieter now in at 1st team LG. Tunsil, Kilgore and Davis the constants.
– WR warmups have been consistently strong, tight since the start of Day 3. Hurns influence?
– No Kiko Alonso today. Undisclosed reason. (Later revealed to be injury) (We knew that)
– Fitzy throwing WR warmup. Rudock throwing RB warmup. Josh Rosen on scout team duty.
– Wilkins/Godchaux. Consistent pairing.
– Rudock with a dime 25 yards out to the back flag of the end zone…Jakeem. drop.
– Team work coming.
– Fitzy to Cox out on the flat on a rollout…..Jerome Baker …BOOM. Chandler Cox is going to remember that.
– Fitzy completes 18 yard in cut to Stills. Sharp stuff.
– Josh Rosen into triple coverage. Pick…dropped.
– If you are afraid to throw picks in practice, you will throw 4,000 of them in the regular season..Rosen is not trusting what he sees.
– Special teams work.
– TJ McDonald calling out assignments……on kick return team. That was Walt Aikens job last year.
– 7v7 time.
– Sharp stuff Fitzy. Moved Bobby McCain from single high with his eyes. Quickly went back right to a seam route to Gesicki. Good play by TJ McDonald/ Jerome Baker to break it up.
– Jaryd Jones-Smith at 2nd team LT now. Color me impressed.
– Hit the Benny Hill music. Fitzy just tried to throw out of the pistol with an empty hand. Fumble.
– There are a lot of fumbles. Drake puts one on the ground.
– Josh Rosen completion! And THATS ANOTHER MIAMI DOLPHINS 2ND AND 8!
– Special teams work. Kick returns from the jugs gun.
– Chris Reed at RG now…..Dieter at LG. Reps at Guard distributed evenly.
– Think of some pretty wild personnel groupings. Yep. Busted coverage, Fitzy finds Parker for big gain. Better pass, he scores. Led him too much toward the sideline.
– Uneventful Rosen stint in 11v11.
– Practice over.
– Fitzpatrick gets some work in after practice.

And the Dolphins QB battle continues…
Scroll to top