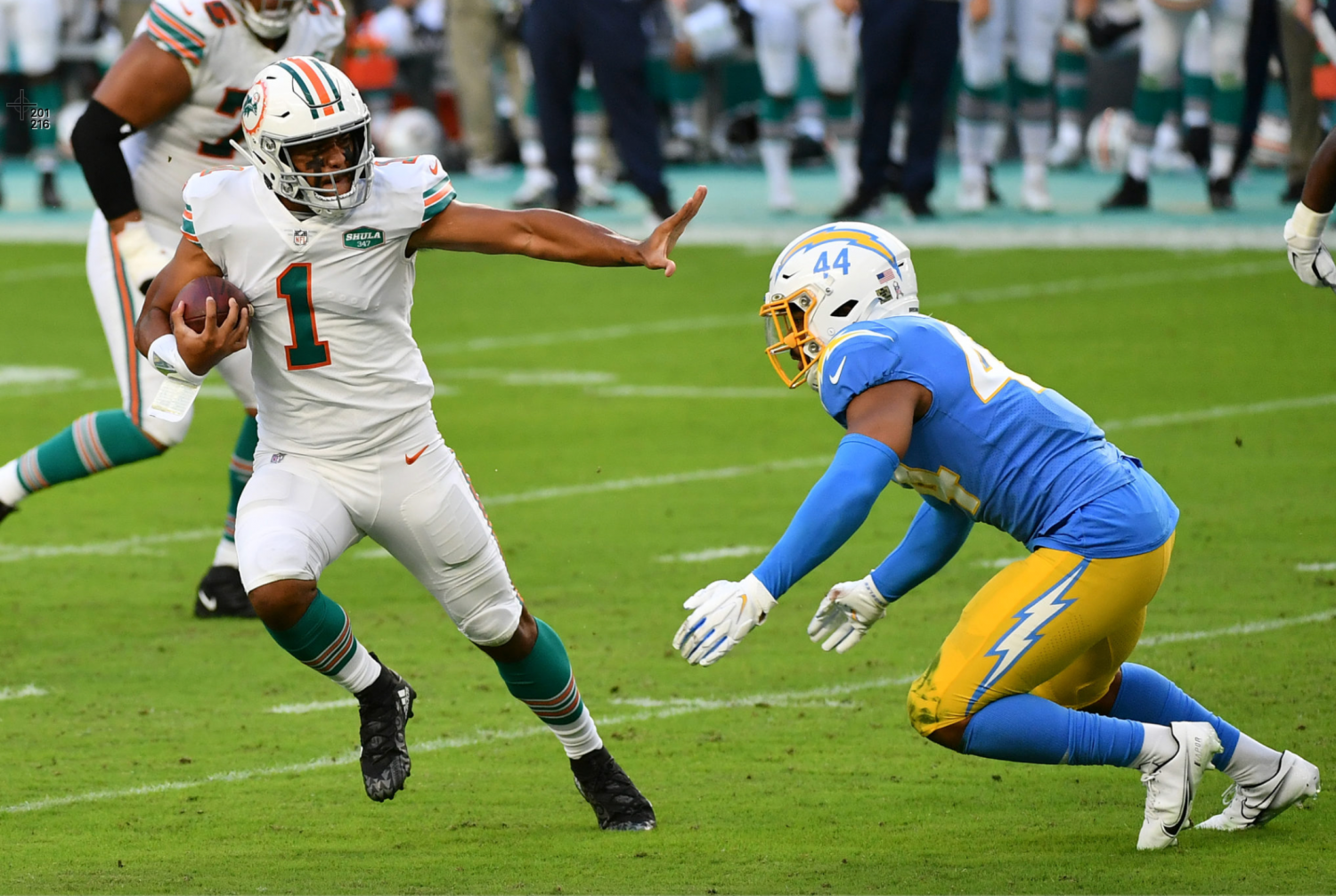 Welcome back to another installment of Stock Up & Stock Down. In Week 10 of the NFL season our Miami Dolphins faced the Los Angeles Chargers and came away victorious . Leading throughout after a blocked punt put us on the 1 for the first drive of the game. The Defense showed Herbert cexotic looks all afternoon long leading to his worst game as a pro. With so much to dissect let’s dive right in:

One of the most impressive rookie performances of the year (excluding Tua) has to have been Salvon Ahmed against the LA Chargers. 21 carries for 85 yards 1 TD with 1 catch 5 for yards is what Salvon was able to finish with for the day which it was the closest in recent memory that we have gotten to a 100-yard rusher (we are officially 27 games straight without a 100-yard rusher). I look forward to showing you guys this week how impressive and complete of a game that Ahmed had as I saw him catch passes, run the ball, and protect Tua in pass pro. Regardless of who comes back from injury, from this point forward this should be Salvon Ahmed’s backfield to lead.

Coming into this game I fully expected Flores and his defense to come more focused and determined to play well compared to last week vs the Cardinals. Flores coming from the Patriots style of defense showed that their core belief of destroying rookie QBs traveled down south. Coach Flores all afternoon long showed exotic blitzes and coverages ranging from having no lineman with their hand on the ground and sending the house multiple times on third downs. While we did give them a chance late in the game, we held tough forcing Herbert into a late interception by Xavien Howard. Another of my gripes with the coaching staff is the conservative calls which wasn’t how we played when we decided to go for 2 to make 28 and a 2-possession game and while it did not work out, it still showed the ability for the coaching staff to learn from previous mistakes and improve.

A couple of weeks ago it was the punt return for a TD and this week there was not a better time to see the Special Teams be, well special. Going ahead and blocking the first punt of the game gave us a lead to start the game after we had just deferred the ball. Little details like that go along way especially when you see the end result being only a 1 possession game. There were also multiple times where Jakeem was a shoestring tackle away from taking it back to the house as he had punt returns of 18,19 and 20 yards. Each passing week shows that this is as complete a team as any in this league. We can rely and expect excellence from all 3 phases of the game, the offense, the defense and the special teams.

Having spent the previous 2 weeks diving deep to see what is going with our rookie DL.

So let me just start this Raekwon Davis thread by saying that I fully endorse, understand and would have had the same reaction had I known what Coach Flores knew. pic.twitter.com/srbYcTaStR

Thanks for all the patience. Without further ado, Raekwon Davis Analysis. pic.twitter.com/5hgEwFrCji

Hearing that Wilkins would be officially out for the game made it obvious for me to know that he would be getting a major opportunity to make a name for himself in this league and he delivered. Raekwon played like the player we expected to see when we drafted him with so many WR and RB still on the board. Finishing the game tied for the lead in tackles with Elandon with 7 tackles (4 solo) Raekwon showed that with more in his plate, he can step up and handle it. Can’t wait to do another Juan on Juan this week featuring Raekwon.

The stat watchers will come out and see that Tua only threw 169 yards and see that Herbert threw for 187 and think that Herbert had the better day overall. Those people could not be more wrong. The more Tua plays the more he understands that he does not need to do anything more than what is expected of him. Some may call it a game manager but ultimately right now Tua’s main job is to hold and gain a bigger lead after either the defense or special teams do their part to affect the score. There will come a time where we will need Tua to go out and win us a game that we have no business winning, it will come eventually when we can hear all of the praise for Tua after a monster game, but until that time comes, let’s continue to fill our young QB with confidence because right now, the sky is the limit for him and this team.

Even though the defense didn’t give up a 100-yards rushing on the ground for the second time all year (today we gave up 99 & Seahawks we gave up 98) it was still discouraging to see the Chargers be down the entirety of the game and down to their almost 3rd or 4th string RB and we still almost give up 100 yards. How long can this glaring weakness in our defense last before a team exploits it to hand us a loss. Flores and company have got to figure it out and hopefully having Wilkins back next week plus the confidence gained by Seiler and Raekwon this week helps this defense fix this issue.

This is probably the nail in the coffin for him. Down our top 2 RB and we still sit Howard down. Only a matter of time before he’s cut because Salvon has shown he belongs on the active roster and we may need Jordan’s spot once Gaskins comes back. This will be the last time I write about him as a huge disappointment for me as I really thought he could fix our issues at RB.

It’s no exaggeration at all to say that Karras almost single handedly lost us this game. Getting the ball back up 2 scores in great field position and with the ability to go ahead and kill the game with a 3 score lead we had 2 separate snaps that Karras fumbled. The first one Tua was able to recover and make a hell of a play to DVP for 23 yards. The second one proved to be the back breaker as it occurred on the Chargers 9-yard line and was returned 38 yards before Tua wrestled him down. After the TD that followed the game never felt like it was fully in our control the rest of the way. Hopefully a week of practice can correct these issues as neither snap were Tua’s fault but still put him at risk to get hurt.

If there were a scale of concerned measured from 1-10 with 10 being the highest, I would say I am a firm 7 in what DVP has shown this year. I obviously realize that he has not been healthy all year and it takes time in practice to sync with a rookie QB which DVP is most likely not participating in fully. Having said that I don’t know how much longer our offense can survive with games a 3-game stat line of 9 catches for 98 yards and 1 TD. We need the 1200-yard WR we saw last year, and we need Chan to focus on making DVP a priority early and often next week when we play the Denver Broncos.

Overall, I have never been this excited to not only watch our Miami Dolphins play the most complete games since 2008, but to also be able to tell and show you guys how we are doing. Keep an eye for later this week’s Juan on Juan. Till next time guys, Fins Up!