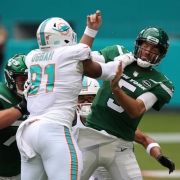 When the Miami Dolphins started handing out numbers for their offseason additions, many fans were skeptical about handing #91 to a former second round pick who never lived up to the draft day hype. After all, that number, in the hearts of Dolphins fans, belongs to the one and only Cameron Wake. Wake’s ability to rush the passer for Miami was unmatched. To give it to someone like Emmanuel Ogbah didn’t feel right. But as the season drags on, Ogbah appears to be channeling the magic once used by Wake.

In just six games, Ogbah is close to matching his career high in sacks for a season. His fifth sack of the year came on 3rd and 4 in the 4th quarter against the New York Jets. Notorious Dolphins killer Joe Flacco, who up until last Sunday was undefeated against Miami with a 7-0 record, snapped the football and found himself running for his life as safety Eric Rowe came on a blitz. Flacco managed to spin away, only to come face to face with a charging Ogbah. There was no escape for the former Ravens starter, and Emmanuel Ogbah dragged him down for a massive 28-yard loss, knocking the Jets out of field goal range and ultimately preserving the shutout.

Today's Sunday Scaries are brought to you by @EmanOgbah 👻

“I know a couple of plays before I know I had missed him on one.” Ogbah said after the game. “I just knew he wasn’t going to get away from me this time, and I knew Eric Rowe pulled him up and he came back around, and I just saw him clear as day so I just took my shot.”

And the rest of the players on defense were very happy that Ogbah took that shot. The Jets were driving down the field, the Dolphins were running out of gas, and he came up big just when the team needed him most, just like the former wearer of #91.

“We were excited we made the play, we were a little mad it was Ogbah because normally we don’t like him like that.” DT Christian Wilkins joked. “We just kind of deal with him on the team. You know, no, that was definitely a big play. We were real hype about that. Ogbah has been working his butt off all year, making plays for us on defense, so it was good to see when he can make plays like that, and we were all dead tired, too, at that point, so it was nice to get a little bit of a rest on that one.”

Of Ogbah’s five total sacks this season, four of them have come in the last three weeks. His predecessor wearing that number had streaks like that. However, one thing that Ogbah can do that Wake didn’t do very well is set the edge. Per ProFootballFocus, Ogbah was excellent against the run against the Jets, earning an 82.3 grade in run defense. Naturally, when looking at PFF, those numbers must be taken with a grain of salt. But there is one stat that can’t be ignored. On top of leading the team in sacks and QB hits (10), Ogbah is also tied for first in tackles for a loss with linebacker Elandon Roberts.

This surge of production seemingly came out of nowhere. Miami’s pass rush was abysmal in the first few weeks of the season. However, now the defense seems to have figured everything out. They are now tied for third place in the NFL in points per game allowed. Their third-down defense is the absolute best in the league.

Emmanuel Ogbah enjoyed his best game as a Dolphin Sunday:

“The first game we have to get used to working together, so I think it took us a little time.” Ogbah said. “But I think we’re on the right path now. We just got to keep it going, keep building.”

That steady improvement has been the key to Miami’s success so far. When the season started, in week one the defense gave up over 200 yards rushing to Cam Newton and the New England Patriots. In week two, they dared the Buffalo Bills and Josh Allen to throw the ball instead. They ended up surrendering over 400 yards passing as a result. The new additions to the team, Ogbah included, appeared to have no impact. All that has changed in the recent weeks. Miami’s defense is coming on strong. The pass rush is igniting, and Ogbah is the spark firing them up.

“These guys like playing together, so when other guys make plays, whether it’s offense, defense, special teams, you see a lot of excitement, a lot of energy.” Head coach Brian Flores said. “Guys were excited for Ogbah to make a play. Guys were excited about the situation, of getting a stop and getting them out of field goal range, and they were excited about the potential to get a shutout. That’s what I like to see, guys enjoying kind of the process of working through the week, prep and preparing, walk throughs, meeting, practice, and then going out and executing on a Sunday afternoon.”

It should be noted that Miami hasn’t shutout an opponent since 2014. Cameron Wake recorded a sack in that game against the San Diego Chargers. Now Ogbah is making a similar impact as the Dolphins strive towards greatness once again.

Some superstitions persist due to emerging patterns. The curse of the Indian burial ground under Hard Rock Stadium is one. Many fans consider #19 to be cursed since the drafting of Ted Ginn Jr. in 2007. Jakeem Grant is doing his best to break that curse. But, perhaps, there are gifts attached to numbers as well. Emmanuel Ogbah doesn’t have the same pass-rushing prowess as Cameron Wake, but his production is just as impressive so far. In the end, it’s production that matters. Even the production that doesn’t show up on a stat sheet.

“I think Ogbah has done a good job.” Flores said on Monday. “He’s played multiple positions, he’s smart, he’s tough. I think for a lot of people, the sacks are the big stat for a lot of people but I think he’s doing a good job in the run game, setting the edge, tackling. When he has to deal with a double-team block, he deals with it and has no problem taking on a double and freeing up another guy. Those are the plays that aren’t flash plays, but they are important plays for any team.”

Will Emmanuel Ogbah replace Cameron Wake in the hearts of Dolphins fans? No, he won’t. #91 will always belong to Cameron Wake when all is said and done. Ogbah came in and signed a 2-year, $15 million dollar contract with Miami to try and revive his career. If he can even come close to living up to Wake’s legacy, Ogbah should have a long, productive career as a member of the Dolphins. Remember, he’s only 26 years old. There’s still plenty of football ahead of him, as long as he can keep channeling that same Wake magic. 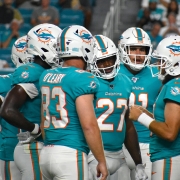 After a preseason that saw the Dolphins purge their roster, they’re not only lacking talent, but also leadership and captains.

Miami rosters roughly 20 players that were on the team last season and first-year coach Brian Flores is looking to discover guys that his vision.

With players like Laremy Tunsil, Ryan Tannehill, Cameron Wake and John Denney no longer with the team, Flores spent the preseason looking for players who can step up as leaders and captains for a team that features one of the youngest rosters in the NFL.

When speaking to the media on Wednesday, Flores told reporters that the Dolphins are yet to name the team’s captains.

Flores said the Dolphins will vote on captains this week.

With everything we have heard this offseason, players like Jerome Baker and Xavien Howard seem like perfect candidates to lead the new era of the Miami Dolphins.

Will Ryan Fitzpatrick earn the title, despite having to play for his job on a week-by-week basis? Can Daniel Kilgore bounce back from an injury-shorted 2018 season and provide leadership for an offensive unit that has combined to start just 88 games?

Who would you like to see step on to the field as captains when the Dolphins welcome Baltimore to Hard Rock Stadium on Sunday?