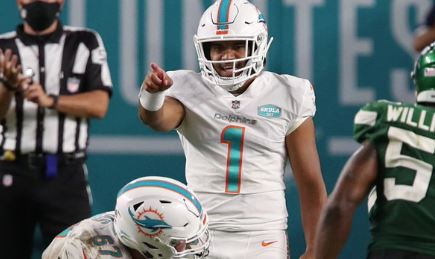 Rewatching Tua Tagovailoa’s brief but eventful Miami Dolphins debut in mop-up duty in the 24-0 thumping of the Jets, and my thoughts drift back to a Monday night in September 1983.

Was watching a lackluster Dolphins loss to the Raiders in a bar in Newport, Rhode Island, which would have been lost to memory until it suddenly became unforgettable. That was when Don Shula sent in the rookie quarterback Dolphins fans had been clamoring to see, and Dan Marino began a Hall of Fame career by chucking two touchdown passes to enliven a 27-14 defeat.

It would be another three weeks before Marino would get his first NFL start (with another relief effort in between).

Remains to be seen when Tua surfaces again. Safe bet the first start won’t come in two weeks when the Dolphins play host to the 4-2 Rams (who will be coming off a Monday night date with the 5-1 Bears).

Unlike Marino, who got enough time to toss fourth-quarter TDs to Joe Rose and Mark Duper that night at the L.A. Coliseum, Tagovailoa only got five plays Sunday.

All I heard during @Tua first pass pic.twitter.com/fFuZp0yFME

He threw two passes, completed both for nine yards. Still, he showed mobility rolling to his left on the sort of play he broke his hip on last November, and completed the first to Patrick Laird.

The second was on the mark to Jakeem Grant for a first down. Notably because it was the only third-down conversion the Dolphins made all day, in nine attempts.

More from Five Reasons: Can the Dolphins follow upward trend of Heat, Marlins?

Only one game back in AFC East

It was a tantalizing taste of Tua that will leave fans wanting much more, and soon.

I was ready for it after the 1-3 start. But circumstances have changed in the past two weeks. The surprising blowout win at San Francisco was a seismic shift.

Now at 3-3, and just a game behind the AFC East-leading Bills, the Dolphins are in position to chase a playoff spot. The way they have played in winning three of the past four weeks shows it is a realistic ambition.

The improvement since the ragged opening losses against New England and Buffalo is profound.

What stands out as meaningful about Sunday was not that Tua got on the field. It was what it revealed about how far Coach Brian Flores has taken the Dolphins as opposed to how previous coach Adam Gates has turned the Jets into the sort of mess he left behind in Miami.

The comparison was highlighted by the CBS studio crew at halftime.

Boomer Esiason on the Jets: “Looking at the Jets’ sideline, it looks dead to me. It looks like a dead team walking. … They look lost.

Bill Cowher on the Dolphins: “They are building a culture, which is about winning football games, holding people accountable and bringing people together.”

That togetherness was evident in Ryan Fitzpatrick leading the cheers for Tagovailoa from the sideline. And in Mike Gesicki, who didn’t catch a pass all day, dashing from the sideline to the end zone to celebrate fellow tight end Durham Smythe’s touchdown catch.

Understand, these Dolphins aren’t ready to make a run deep into the playoffs. But they may be good enough to get there.

This rebuilding effort under Flores and GM Chris Grier appears to be well conceived and is much farther along than could have been envisioned a year ago when they were on the way to a 0-7 start.

The offensive line, with two rookie starters, has been solid all season. And when rookie Austin Jackson went down with an injury, they plugged in rookie Robert Hunt with similar results.

But most significant is the improvement in the defense in recent weeks. This is what Flores was supposed to bring, and positive signs are mounting that it’s working.

With the return of Byron Jones and Xavien Howard trending to pre-injury form (four interceptions), the secondary is solid on the corners, and Eric Rowe has been outstanding at safety.

Emmanuel Ogbah is becoming a force on the pass rush and Christian Wilkins has been stout against the run.

if you like what you’re listening to, please subscribe to the podcast; leave us a ⭐️⭐️⭐️⭐️⭐️review, and most importantly, #finsup

All of that and more are showing up in the results:

Through Sunday, the Dolphins led the league in third-down defense. They were tied for second in points per game allowed (18.8). Their 17 sacks ranked seventh.

By outscoring their past two opponents 67-17, they pushed their net points to plus-47, third in the AFC behind the Ravens and Steelers.

It is difficult to remember when stats cast the Miami Dolphins in such a favorable light.

“I just feel like it’s a culture change,” said linebacker Sam Eguavoen, who endured the growing pains last season. “We still have a lot of guys from the team last year and then they brought in some more guys this year. It’s just been a culture change. ‘Flo’ is still hard on us but he took it back on us a little bit. We still work hard. I feel like we’re the hardest working team in the NFL. I feel like now we’re working a little bit smarter. Guys are buying in. We don’t dread coming in on Wednesdays like we kind of did last year. We’re just growing better as a team.”

Quite the opposite of what was apparent on the opposing sideline Sunday with Gase and the Jets.

So, if Tagovailoa doesn’t start a game this season it will be because they are doing fine with him on the sideline, which they are right now. That could change.

As intriguing as the prospect of what Tagovailoa may eventually bring to the future of the Dolphins, and as much as many of us our eager to see it, if the team is buying in, the rest of us will just have to trust in Flores.

He’ll let us know when it’s time for Tua.

Craig Davis has covered South Florida sports and teams, including the Dolphins, for four decades. Follow him on Twitter @CraigDavisRuns.