The OG is back to protect the CULTURE for a 17th season. Jimmy Butler was the “orca” acquisition Riley had been craving, but don’t discount the importance of bringing back Mr. 305 for the Miami Heat.

We all know the narrative around Haslem at age 39, UD has seen the twitter chatter too. Yet, anybody who questions what Udonis brings to the Miami Heat locker-room is either blind or ignorant. Rarely does the last man on the roster provide such unmeasurable value and return on investment. He’s more than a player-coach. He’s the literal human embodiment of HEAT CULTURE. That mantra we all love – The Hardest Working Best Conditioned Most Professional Unselfish Toughest Meanest Nastiest Team In The NBA – that IS Udonis Haslem. His entire life-story could be the first chapter in Spoelstra’s Team Handbook, given to players at training camp.

In 2016, HEAT fans were left bewildered and broken-hearted when Pat Riley and Dwyane Wade went through a bitter divorce. It felt like the world had been turned upside down. The infamous HEAT CULTURE was in peril. Who was there to pick up the pieces and keep it all together? The Captain. And truthfully, besides that season we all wish to forget, UD’s presence has never been more vital inside 601 Biscayne Blvd.

Playing with Udonis Haslem is a right of passage if you’re suiting up for the Miami Heat. That C on his chest wasn’t just given to him. He’s earned it! UD not only gets players to buy into the CULTURE, he enforces it. Just ask Quentin Richardson, who told a fantastic story of Haslem introducing him to HEAT CULTURE on his Knuckleheads podcast. How can we let Jimmy Butler start his Miami Heat tenure without Udonis Haslem by his side? It just wouldn’t feel right. Jimmy yearns to have guys like UD alongside him in the fight.

Last season was all about celebrating Wade’s One Last Dance tour. This season should be all about passing on the torch to the next generation. The process has already started, especially with Bam, as Haslem noted in an Instagram post that made all of Miami misty-eyed. But his mentorship goes beyond Bam. UD has a tremendous impact on every player that dons a Miami Heat jersey, on and off the court.

Need some proof? Look no further than this exceptional write-up from local legend, Barry Jackson, where Goran Dragic gushes over UD’s importance to this team. He’s clearly Spoelstra’s most trusted advisor and confidant. When a message needs to be delivered to the team, all he has to do is look down the bench at #40. Not only does Udonis know exactly what needs to be said, but it’s the emotion, honesty and Championship experience behind those words, that resonates with players.

And this season, with the loss of Juwan Howard, who else can Spo lean on to be his “player-liason” when things get a little rocky – because they always do. That’s not a knock on Spoelstra, but we all know his history. At one point it was Fizdale that would help smooth things over between Erik and a player. When Fizz left, that role was handled by Juwan Howard. Well, now Juwan is in Michigan.

Spoelstra needs that extra voice to help instill confidence in whatever decision he’s making. Especially in regards to players falling in and out rotations, sometimes overnight. Nobody knows that better than Udonis who rapidly went from the starting lineup to the end of the bench. That’s something to keep in mind if Spoelstra wants to insert Justise Winslow as his starting PG and have Goran Dragic run the second team. Haslem, the ultimate team first warrior, is the perfect person to help Goran transition mentally into this new role as sixth man and mentor to #PointJustise.

Point blank, Udonis Haslem can go out anyway he wants. He’s earned that! The man that leads HEAT Nation into a frenzy anytime he hits a baseline jumper, grabs that last rebound, or tell Lance Stephenson that he’s going to f*** him up, and that’s real – a personal favorite of mine.

UD that has shed blood, sweat and tears for the city he loves and the state tattooed on his back.

That type of leadership never gets old. That’s why Miami loves him.

That’s why #40 will hang in the rafters.

That is why he’s the Captain.

There is a lot of buzz around Bam Adebayo.

Especially now that Hassan Whiteside is no longer around.

The Heat’s 2017 first round pick was a metrics standout after he finally replaced Whiteside in the starting lineup last season, and the Heat — publicly and privately — have not been shy about their feelings for him. As long as he doesn’t get traded for someone like Bradley Beal (a story for another day), it appears Adebayo will receive the 30 minutes per night he should, and get a chance to showcase his talents.

But it’s not just the skills the Heat like — it’s his makeup.

On the night he was drafted, a team official told me they had a huge binder on Adebayo, talking to anyone and everyone who knew him, and that official described him as “the anti-Hassan.” Someone who works with the team. Someone who doesn’t need constant validation. Someone who gets it.

And when you get it, you get praise like this from the keeper of Heat culture on your birthday:

@bam1of1 I'd be lying if I said I've had or could ask for a better young fella!!! As much as you nag, aggravate, and antagonize the hell out of me, you make it a joy to come to work everyday. The way you see the game. The way you approach the game. Who you play for. Why you play. And how you reach your goal of getting there all falls in line with the young UD. Although different styles we not that different at all kid. Been looking for someone to take this shit and run wit it and from where I'm sitting it's you! You have the mold of a lifer!! It was never more evident then watching you finish the season the way you did last year… Never complained. Just lead by example no matter the circumstances mentally or physically. This bout all the good shit you gonna hear from me til next year so enjoy it kid. Lol. We gon have a lil fun for ya bday then it's back to verbally abusing you. Lol. HBD young fella!!! Idk how old yo ass really is but it's still a blessing to see another year!! Lol. Love ya lil bro/son!!! #og

“Been looking for someone to take this s— and run wit and from where I’m sitting it’s you!”

And of course, the skills do matter.

He showed off some in the Miami Pro League.

And that’s why I’m saying this:

Bam Adebayo will finish in the top 5 in Most Improved voting this season.

OK, that’s not the word he would use.

Five Reasons and Miami favorite Udonis Haslem posted on Instagram, to let people know what he thinks of them telling him he shouldn’t play anymore. He might tell you something different in person.

I've never been the one to listen to outside noise. Key word is listen. Doesn't mean I don't hear. See the thing most average minded people don't get is if I let your expectations of me define me then I wouldn't be here today. Problem is majority of this world is average ASF!! Nobody ever expected shit from a young fat kid from liberty city. Hell why would they? But I'm thankful they didn't. I guess I shouldn't own Subways, and Einstein, and Auntie Ann's, and Starbucks, and 800 Degrees Woodfire kitchens either huh? What I've grown to realize in my life is that my obsession with success, my drive to overcome obstacles, and my overall work ethics is way higher than most. And I'm ok with that. It makes sense why most think I should retire at 39. Cause most would. Cause most are average minded. Most don't look like this at 39! Hell they ain't look like this at 19. Lol. So y'all keep worrying about the last spot on the roster while I sit back and stay ready so I don't gotta get ready. I'm not saying I'm playing next year but if u with me then u will support whatever I do!! Not tell me what to do!! And if that ain't good enough for u, in the words of Barbara Wooten f**k ya!! U was never wit me anyway!! Oh and one more thing. You out your 🐰 ass mind if you think I can't still play this game. I'll sleepwalk into a double double cause I'm just built different!! Y'all should know that by now but keep hating. I need y'all!! A chain is only as strong as its weakest link and if I'm the weak link that's a hell of a f**king chain!! ✌🏾️☑️💯 #og

Our view on this:

UD should do whatever the f— he wants.

He takes the 15th roster spot?

The Heat have 2 two-way slots now. They can develop young players that way.

And if he wants a podcast on the Five Reasons Sports network, get him a damn sponsor and let’s do it.

Very few athletes in South Florida history have earned this right. He has given himself to the Heat franchise and, more importantly, the community, in every conceivable way. His body. His soul. He is Heat Culture, if that really means anything.

Oh yeah, and he takes a photo with my daughter at every Heat family fest.

She chose that jersey for a reason. 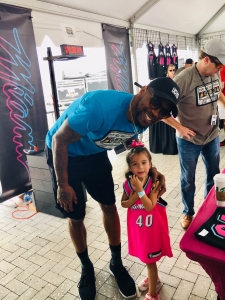 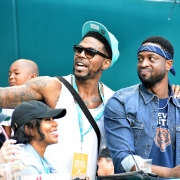 This Teammate of the Year thing is a cute idea.

Reward someone for being there for the other guys on his team…. day after day, year after year.

But really, what are any of these other guys doing here with Udonis Haslem?

Thank u for the nomination for the 2018-19 Twyman-Stokes Teammate of the Year Award #blessed #og pic.twitter.com/dvFG62sih1

We like Mike Conley a lot…. he’s a nice guy and a major Dwyane Wade stan.

Channing Frye is a popular figure…. and a Goran Dragic fave.

So is Jared Dudley.

Our Nekias Duncan (pictured left below) has more than a man crush. 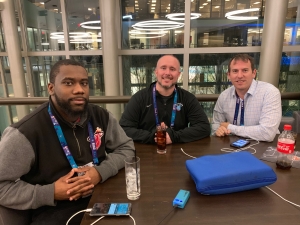 He has a restraining order against him from the Bucks forward.

(Maybe. Maybe not. But he should.)

Congrts to all the nominees but this award has @ThisIsUD written all over it. Y’all know where my vote is going and it’s not because he’s my brother it’s because i get to witness it everyday. He’s an everyday leader for us. https://t.co/W8lNgKw38K

Lance is playing with LeBron. Seriously. You remember @ThisIsUD separating them? From our podcast… https://t.co/DeCpatSGfq

Oh, and there’s this:

If that’s not taking one for the team, nothing is.

(Feature photo by Tony Capobianco at a Dolphins/Bears game, where Haslem tolerated Wade.)