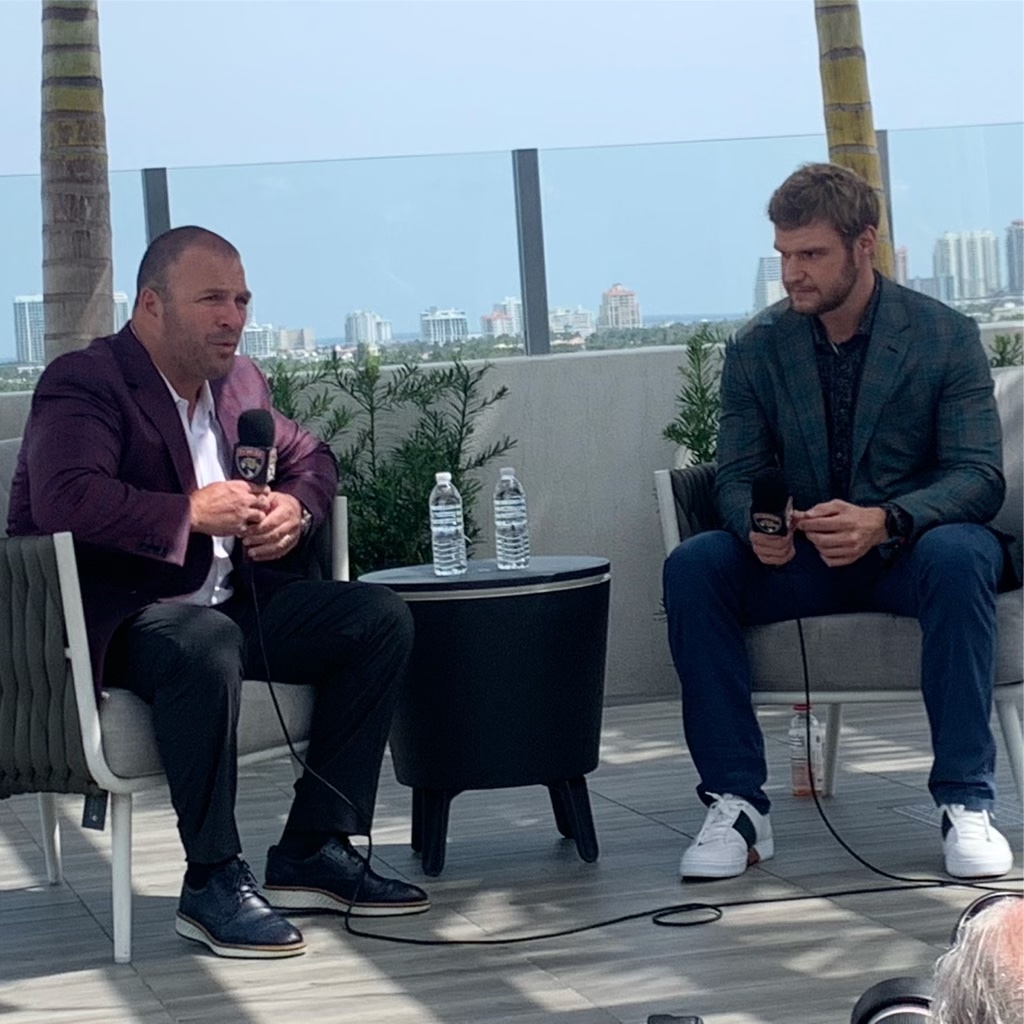 The start of the new NHL season for the Florida Panthers is only a week away and the league should be scared of this year’s Cats team. With key players returning from injury and some new faces in Sunrise, can the Panthers compete for the Stanley Cup? Here is the 2021-2022 Florida Panthers season preview.

Last year the Panthers surprised a lot of people around the league after finishing second place in the Discover Central Division and taking the back-to-back Stanley Cup champions to six games in the first round of the playoffs. After a long off-season, the Cats are back, but Bill Zito and company weren’t going to let other teams get the jump on them for this season. The team made some huge moves in the summer which helped line up their roster for the upcoming year.

And the bookmakers have noticed.

The Panthers are in the top 10 favorites to win the 2022 Stanley Cup. Their current odds are listed at +1800 which is a slight improvement from prior to the preseason games.

It might be worth checking out some of the sportsbooks available for NHL right now before the odds get even better. If they win this season and bets were placed on the current +1800, the payout would be good. There are a bunch of other futures you could find on the sites, just make sure to shop around to find one that gives you the best value.

The biggest off-season move for the Panthers has to be the acquisition of Sam Reinhart from the Buffalo Sabres. The former second overall pick had five 20 goal seasons in his six full years with Buffalo. At just 25-years-old Reinhart has already scored 295 points in his NHL career, while playing on one of the worst teams in the league. He is expected to start the season on the first line with Carter Verhaeghe and Panthers’ captain Aleksander Barkov. Barkov just won his first career Selke trophy as the best defensive forward in the league and finished the year above a point-per-game. Verhaeghe finished his first year with the Panthers scoring 18 goals and 18 assists in only 43 games, proving to be a consistent scorer for the club. Expect this line to put up a lot of goals, night in and night out.

While Florida’s first line will be a nightmare for any opposition to come against, the second line is arguably just as lethal as the first. This line is led by Florida’s leading scorer last year, Jonathan Huberdeau. Huberdeau has been above a point-per-game player in his last three NHL seasons and has solidified himself as one of the best forwards in today’s game. To start the year on the opposite wing will most likely be 22-year-old Owen Tippett. Florida’s first round pick from 2017 played his first full NHL season last year with the team. After a shaky start to the season which saw him getting limited ice time, Tippett found his game and went on a tear while playing big minutes on Florida’s top-six. In six playoff games last season, he scored four points and has already shown good form this preseason. Down the middle is another former first round pick and potentially the hidden gem of Florida’s forward core; Sam Bennett. Bennett joined the Panthers at the trade deadline last season and immediately made his presence felt in the lineup. He’s a big, aggressive center who not only can lay the body, but can also put the puck in the back of the net. My main critique of the Panthers at the beginning of last season was their lack of physicality up front. With Bennett slotted down the middle, nobody is safe when he’s coming at them.

The Panther’s top two lines will be carrying the load offensively for the majority of the season, but where the true heart of the team lies is in the bottom-six, or the depth lines.

The third and fourth lines aren’t as clear cut as the first two; there are too many different options the Panthers can field for me to create accurate lines. However, this isn’t a bad thing. Some depth guys this season will include Anthony Duclair, Frank Vatrano and Mason Marchment; all of whom spent time playing on top lines throughout the last few years. Duclair and Vatrano both can be moved up and down the lineup throughout the year, as seen last season. With the speed and skill of Duclair and the clutch late scoring genes within Vatrano, Florida won’t have to continuously depend on Barkov, Reinhart and Huberdeau to provide consistent offense.

Compared to the beginning of last season, a lack of physicality isn’t an issue for the Panthers anymore. Mason Marchment made his debut last year after being acquired from Toronto the season before in the Denis Malgin trade. The 6’4, 210 pound winger is big and will need to lay the body when he is on the ices;. However Marchment isn’t the energy bus of the bottom-six, that would be 5’9 Ryan Lomberg. While he isn’t the most offensively or physically gifted player on the team, Lomberg plays with his heart on his chest. He will drive the net, get into the corners, fight guys twice his size and throw his body everywhere. Both of them played in all six playoff games last season and let their presence be felt.

While this team is composed of mostly guys in their mid twenties, Bill Zito hasn’t been afraid to bring in veterans during his tenure in Sunrise. One of his first moves as GM last off-season was bringing in two-time Stanley Cup champion Patric Hornqvist from Pittsburgh. Hornqvist became a fan favourite and was part of the Panthers’ leadership group last season. This year another long-time NHL vet will be joining him at FLA Live Arena, future Hall of Famer Joe Thornton. Thornton has accumulated over 1,500 NHL points in 1,680 NHL games. Jumbo Joe also has 134 points in 186 career playoff games.

Florida lost Alexander Wennberg to Seattle in free agency this year, but his replacement is the 2020 first round pick, Anton Lundell. Lundell was a star at last year’s IIHF World Junior Hockey Championship (U-20) and IIHF World Hockey Championship (Seniors) for Finland, leading the Finns in points at both tournaments. He showed that he was a man amongst boys at the World Juniors; his puck moving ability paired with his speed and hockey IQ helped lead Finland to a Bronze medal in Edmonton. Lundell didn’t miss a beat when he got the opportunity to play for the senior national team at the World’s, once again proving he could play with the best in the world. He won a Silver medal for his country in Riga. Lundell is only 20-years-old but the 6’1 Finn is going to be good and playing on the same team with one of the best Finns on the planet Aleksander Barkov will only boost his development.

Defense wins championships is a true statement. Look at the bluelines of the last few Stanley Cup winners. Each team had a Norris trophy caliber defenseman. Luckily for Florida Aaron Ekblad is back and looks better than ever after he suffered a season-ending injury against Dallas last season. Before the injury, Ekblad looked as if he would be contending for the Norris. When the number one defenseman on the team went down, it seemed as if Florida was in a tough spot. And then MacKenzie Weegar stepped up and never looked back. Weegar ended the season with 69 Norris trophy votes, the seventh most in the league. For this upcoming season, a healthy Florida D-core would have two elite level defenseman playing on the top pair with Ekblad and Weegar.

The top-two defenseman on the team are set in stone, but that doesn’t mean there isn’t more to be excited about. Gustav Forsling joined the Panthers before the start of last season after being waived by the Carolina Hurricanes. When Ekblad went down, Weegar assumed the top defenseman role and Forsling leaped into that number two spot. The Swede is extremely fast on his feet, both with the puck and without. I’d say he is the fastest defenseman on the team. Forsling will command that second unit and he has a few guys that could pair up nicely with him. As of now it looks like Brandon Montour will round out the top-four defense pairs for the Cats. Montour was traded from Buffalo to Florida last season and jumped into the lineup straight away. Both Montour and Forsling have the ability to jump up in the play and create offense from the back-end. The pair also extended with Florida this off-season, each signing three-year contract extensions.

To round out the defense, the butcher himself Radko Gudas will continue to be a human wrecking ball on the blueline. Gudas led the NHL with 250 hits last year in his first season with the Panthers. The sixth defenseman spot is up in the air as of now, with the likes of Markus Nutivaara and Matt Kiersted in contention. I wouldn’t be surprised if Kevin Connaughton also gets a look.

The biggest question heading into next season for the Panthers is between the pipes. With the departure of Chris Driedger, there’s no doubt that Sergei Bobrovsky and Spencer Knight will be the two goalies for Florida this season. Yet, we don’t know who the starting goaltender will be for the year. It looks like Bobrovsky will be the starter on opening night and if that’s the case, it will be his net to lose. Spencer Knight is the future of the Florida Panthers goaltending and he did a great job coming in the middle of a playoff series last season and winning the Panthers a game at just 20-years-old. But he is still only 20 and has yet to officially play in his rookie season (didn’t play enough games in 2020-2021). Goalie is the most important position on a hockey team. A hot goaltender can carry you in a series, as we saw last year with Carey Price taking the Canadiens to the Stanley Cup Final. Even if Bobrovsky is the starter opening night, down the stretch, who will the Panthers call? On one hand you have a two-time Vezina winner with Bob. When he is on his game, he is one of the best in the world. However he hasn’t performed like his former self in his two seasons in Florida. On the other hand Spencer Knight is a rookie playing on a team that could very well compete for the Stanley Cup. Goalies VERY rarely ever make their NHL debut at such a young age, but Knight isn’t a normal goalie; he is a first round pick and a proven winner at the junior level. Only time will tell who is the number one goalie going forward for the Panthers.

Looking at this roster, it is extremely deep. The top-six has proven scorers in this league and they seem to be very comfortable playing alongside one another. Every team experiences injuries and setbacks throughout a season. Having guys who can jump in and out of the lineup on the forward side will be a key to the year round success of the team. The defensive core is strong, but after the top-four, it’s not anything special. Having a healthy blueline at the end of the year will be important for the team. Finally, the goaltending. The Panthers could either have two really good goalies, one guy that isn’t living up to expectations, or another long off-season. Can the Panthers win the Cup? Looking at how other contenders are constructed around the league, I do believe Florida should be one of the top-five teams in contention for the Stanley Cup. Then again, the Cats haven’t won a playoff series since 1996 and they are playing in easily the most competitive division in hockey this season, the Atlantic.

Tyler Herro is Primed for a Bounce Back Season