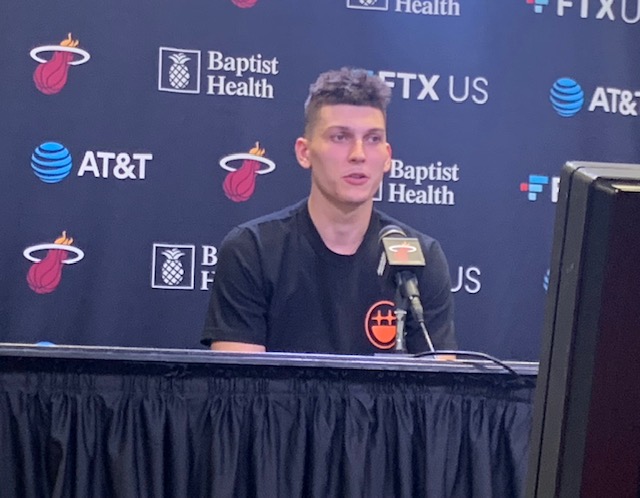 The 2021-22 season is a brand new start for so many players on the Miami Heat. Some of them are newcomers, while others are familiar faces with something to prove. The trials and tribulations of an embattled second season are behind guys like Kyle Lowry, Bam Adebayo, and Duncan Robinson. But for Tyler Herro, a player entering his third season, he sees an opportunity to show everyone what he’s truly made of.

To look forward to the future, we must first examine the past path of the young guard out of Kentucky. Herro would have to abruptly stop the rookie campaign that saw him post a solid 13-4-2 line while shooting 38% from 3 on 5 attempts a game. An unprecedented pandemic forced everyone to readjust their usual NBA clocks. It’s hard to imagine how this would affect rookies that had yet to even set their clocks. But Herro made the most of the break between the abrupt hiatus and bubble down in Orlando.

We saw small improvements in his finishing that included hints of a floater game; as well as better on-ball handling, and reps in the pick-and-roll. The young Heat rookie had worked tirelessly to help his team reach another level once it was playoff time. This reputation of always wanting to improve and wanting to be in the gym like his mentor Jimmy Butler was a reason the organization fell so fast for him. Though Miami ultimately came up short in their run; the team and their fans felt they had something special brewing with Tyler Herro.

But not everything comes easy, and reality can hit you like a sack of bricks. The NBA announced that the next “regular” season would begin in less than 80 days. No real offseason for a player who proved what he could do when given the proper time off to improve. Another wrinkle in the path Herro thought would be a lot smoother.

It was a rough 2020-21 season for the team as a whole, and especially for a second-year player like Herro. Dealing with the weight of expectations, nagging injuries (hip and foot) that never went away, and new celebrity status. But even when going through the hell that was 2021, Tyler came out of the other side with improved raw stats as he put up 15-5-3. When you took a closer look, his shooting numbers did take quite a dip, but the perseverance to get any sort of upward tick was gutsy in itself. You could see how everything was weighing him down throughout the season. It was fitting that the day he had his best game of the season against the Sixers, putting up 34-7-4, we learned he was playing through neck spasms.

Herro played through it all yet received numerous criticism for falling in love with the celebrity side of NBA life. While he was improving his finishing at the basket, people could only point out his shortcomings. Expectations were getting ridiculous and his loud internet fanbase wasn’t helping manners. Neither were the constant trade rumors following him for pretty much the entire season. From the James Harden whispers to the Kyle Lowry talks that followed soon after.

Herro’s 2020-21 was a war of attrition between him and circumstances beyond his control. One battle would end and another would start immediately after. He never surrendered but it was clear the ammunition just wasn’t there.

But now the 2021-22 season is on its way. Herro’s received proper time to prepare for new battles and obstacles thrown his way. “He’s had a great offseason, it’s all about impacting winning. Everything his 1st year was roses & easy sailing. Last year he was better statistically but it’s important to be able to handle adversity and when the narrative changes to forge ahead” said Coach Spoelstra on Herro during media day. “I am going to wake a lot of people up,” said Herro about the number of people sleeping on him.

We got a glimpse of the newly equipped Tyler in his first preseason game against the Hawks this past Monday. Herro was not only hitting his usual jumpers but getting to his spots easier. You can see from the video below how much the game has slowed down for him. You can’t take too much from preseason, but the style of play and fluidity of motion is easily translatable into the regular season. The dividends that Herro’s on-ball reps that occurred throughout his first two years were starting to show already. You can see the way he puts his defender in jail when coming off that initial screen. He’s not being forced out to the perimeter as easily with his newly added bulk. Getting to that second line of defense consistently was always the next step in his process to being a really good scorer.

It’s pretty appropriate he was up against Trae Young, who has mastered this exact kind of scoring. Another thing Herro looks to emulate from Young is the immaculate floater game. While Tyler is a much bigger player than Trae, it never hurts to use the shot known as the “giant killer.” Herro spoke after the game saying “I think it’s a really efficient shot for me as opposed to getting all the way to the rim against 7 footers all the time. Whether it’s pulling up in the midrange, or getting to that floater, I think I can be really efficient in that area all season.” The in-between scoring has always been a facet Herro has shown flashes of before. Mastering it will allow him to take another step forward.

There is also the rim pressure portion of Herro’s game that was quietly on display that night as well. Tyler’s added weight and visible bounciness helped earn him 6 free throw attempts and assists off drives. During a team scrimmage earlier everyone was buzzing about a dunk he had in traffic that seemed to turn some heads. No one had seen things like that before; which is why it was the cause of such talk. Adding 4-5 free throws a game would do wonders for someone who already has such a smooth jumper. What better players to learn about drawing fouls at the rim than Jimmy Butler and Kyle Lowry after all?

Speaking of Lowry, his impact is going to do wonders for the next step the boy wonder will take. Having another player like Butler who loves setting up his scorers the way Lowry does? That’s music to the ears of everyone involved, especially a score first guard. “Everyone notices the differences when he’s out there. The way he gets everyone to their spots, he’s really advanced in that area. He’s helping me a ton, I’m blessed to be able to play with another guy like him,” Herro said about playing with Lowry.

Thinking less and being able to play more freely are what Lowry allows Herro to do. These sorts of things are even more important to a guy like Tyler, whose game is best suited in free-flowing offenses. Allowing him to read and react faster without the demon of overthinking hanging on his shoulder. That overthinking was what constantly jammed his process last season; whether it was on the floor or off of it. Now leading a bench unit all to himself, while at the same time always being on the floor with another creator in Butler or Lowry or both. A Sixth Man of the Year award seems more than likely if he performs the way many envision.

Guys like Kyle Lowry can do wonders in player development.  Just look at how much it helped with players like Fred Van Vleet, Pascal Siakam, and OG Anunoby. Miami hopes that he does the same with Tyler Herro as well as Bam Adebayo.

Tyler Herro has very rarely dealt with any sort of normal circumstances since he got into the NBA. But he hasn’t complained one bit, even if it would be quite understandable. He’s forged ahead with the hand he’s been dealt when others might have crumbled. Ready to prove to everyone that writing him off so early was their first mistake. Playing “free” and “loose” with a bounce to his step.

A bounce that has visibly returned, whether literally or figuratively. Tyler has talked about how much his game is predicated on confidence. Last year was such a rough year, that it might have broken any other player’s confidence — but not for Herro. He started immediately after the Bucks series, as Coach Spoelstra pointed out, and never looked back. He looked forward to working hard on his game during an actual offseason. Adding whatever he could with the time finally granted to him. His confidence, health, and bounce are back; all that’s left is to show everyone who the real Tyler Herro is.

Mateo’s Hoop Diary: J-Kidd Off to a Rocky Start?