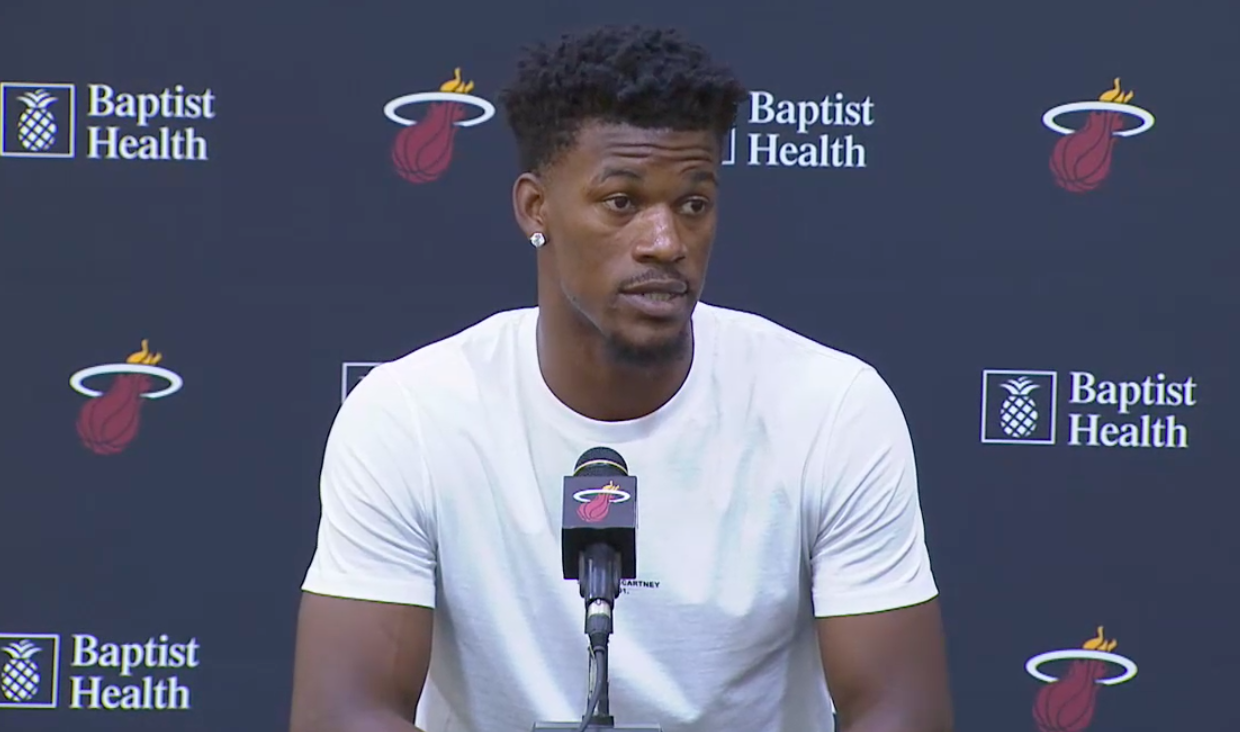 After one-half of this current chaotic whirlwind of an NBA “season,” the Miami Heat find themselves at 18-18. It was more of a matter of survival for Miami in the first lap around the track. They somehow pulled through and endured countless COVID and injury-related absences. Going through portions of the season playing 2-way guys major minutes and having all of their offseason signings contribute little to nothing in the process. But thanks to the East not running away from them amid the chaos, they held on and still have their sights set on homecourt in the first round. All of this thanks in large part to their alpha in Jimmy Butler. It only seemed appropriate that Butler, who survived his own Covid-related absence, would be the rope that led them out of the dark well they were stuck in. The man who came to the Heat because of its ethos and identity continues to be the engine that drives the team through every grueling mile.

How much have the Heat relied on the man they call Jimmy G Buckets? Their record with him so far sits at 14-8, which would put them near 3rd in the East. But without him, they are a measly 4-14, which puts them in the same class as the Detroit Pistons and Minnesota Timberwolves. Although many of those games also featured quite a few of the other important Miami teammates being out.

Still, it’s pretty apparent just how much Miami has relied upon their All-Star to make their team go. His importance can also be felt when he’s not on the floor in games he plays in, mainly on the offensive end. The team sports a 110.9 offensive rating when he’s out on the court, compared to the 104.2 they have when he sits. The difference is even more noticeable when you watch the film. Jimmy’s ability to get downhill despite defenses knowing his cruel intentions for the rim is masterful. And when that rim pressure isn’t there, the offense gets stuck with constant aimless passing around the perimeter, hoping something eventually cracks. It has definitely helped to have Goran Dragic back to be that downhill threat off the bench, but relying on an aging point guard with a million miles on him to be that guy is a dangerous game.

Miami needs to find that same identity, or at least a facsimile of it when he’s sitting and Dragic isn’t available, which is likely due to where he is in his career. Butler plays every minute with such a constant intensity that would make John Malkovich cry in his sleep. You can’t lean on him to this extent this early in the year when you expect him to take it to another level come playoff time. Not to mention that those Tom Thibodeau minutes can leave a mark on you.

Thankfully for Miami, Erik Spoelstra has monitored his minutes quite well, to the tune of 33.1 minutes a game. But in those 15 minutes and games that he’s not out there, the team can’t seem to keep that same identity. This is where Bam Adebayo comes into play. Bam, as Jimmy calls him, is the heart and soul of the Miami Heat. They need Adebayo to be that facsimile, especially in the inevitable games that Jimmy Butler will miss. Everyone and their mother knows that Bam can and should become the heir apparent to the Heat franchise and can be more than a facsimile. Hell, he’s probably that right now, and he might be the only one who doesn’t know it. Everyone knows it’s frustrating and certainly isn’t helped when Adebayo continues to end Zoom Pressers with “I need to be more aggressive.” Fans forget how painful growing pains can be until you’re experiencing them.

The Heat are a team of equal opportunity offense, but even Jimmy knows when it’s time to go into the do-it-yourself kit and give a jolt to an otherwise dead possession. Bam needs to find that kit himself and keep the team well above the tidal waves that hit them when Butler sits. It shouldn’t be a tsunami-like hit every time he goes to the bench, especially with Adebayo still being at the helm of the levees. That might be the final step the team needs to take to hit another level in the second half of the season.

I would love to see Miami run more reverse pick-and-rolls with Bam Adebayo and Duncan Robinson, forcing the defense to react to the near 6’10 bull that handles the ball and can make the smart pass whenever the opposition reacts. It’s not that Bam can’t bend a defense without Jimmy; it’s about the opportunities and willingness to do so. Last season Bam’s on/off numbers looked a lot better to the tune of a 5.0 net rating when on the floor. But those numbers have dipped considerably down to -0.4 this year. Both due to teams scouting the Adebayo-Robinson dribble-handoffs and Bam playing plenty of games with less than ideal rosters on the floor. Those handoffs don’t have the same juice, and it’s why I implore the team and Bam to try new avenues that could propel them to greater heights. It’s frustrating for fans because they have seen Adebayo answer these questions in spurts dating back to last season’s playoffs. Hopefully, the young ever-growing jewel of the team’s eye can realize it himself soon enough.

So much of this shouldn’t be on Adebayo’s shoulders but the rest of the team as well. Everyone needs to fill those gaps in their own way. Last season Miami had 8 guys who played major minutes contribute a positive net rating, compared to this year’s 3. Plenty can be attributed to guys playing a few spots too high in the rotation leading to a less than ideal distribution of minutes. In my opinion, a trade or two might help to shore up some of these problems, but it’s also up to the guys on the floor to do their part. It doesn’t matter how they do it, but they need to find that same balance and calm that comes when a guy like Butler steps on the floor. Or at least something close to it.

Miami shouldn’t take these Jimmy minutes for granted. What he’s doing is something special and rare. The only other players to put up at least 20-7.5-7.5-1.9stls on 57% True Shooting are Michael Jordan in 1988-89 and Magic Johnson in 1980-81. Don’t let these ever fleeting seasons fly by without a proper show of appreciation. This is the player who chose to make Miami his home because he identified with so much of what they do. Now he’s the team’s entire identity on a nightly basis. Miami needs to reward him even more by echoing that identity and carrying that torch he keeps lit with his burning fury. The Miami Heat and Jimmy Butler have become synonymous with each other. To survive the second half of the season, they need to make sure the relationship is more symbiotic than codependent. Jimmy won’t let this team down, and it’s up to them to do the same for him.

Marco Romo will be found on Twitter again soon. We promise.

Isan Diaz and his last shot

Pressure Point: Flores ‘excited’ about Tua as Dolphins prepare for...
Scroll to top