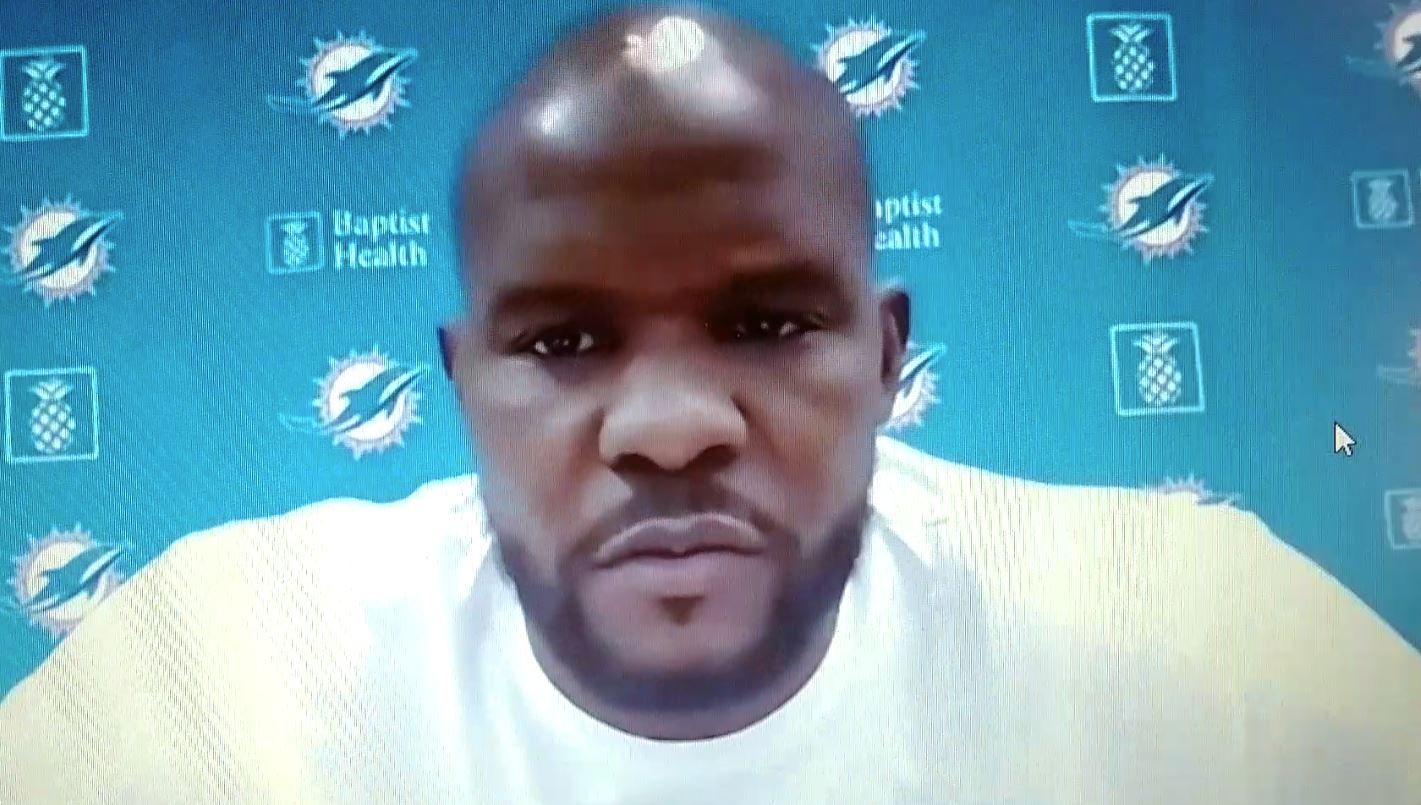 All of the speculation so far in this NFL offseason about the Miami Dolphins is focused on the possible pursuit of elite quarterback Deshaun Watson through trade and what they may do with the third overall pick in the NFL Draft.

None of it has altered the view of coach Brian Flores, at least publicly, regarding Tua Tagovailoa.

Asked his reaction to conjecture about the quarterback position, Flores said Thursday, “My reaction is I’m excited to work with Tua.”

Flores was addressing South Florida media ahead to the free agency signing period beginning March 17 and the draft to follow April 29-May 1.

The coach did the usual gingerly dance around how the Dolphins will approach those two crucial offseason roster-building tools. His remarks on the draft indicated that the Dolphins aren’t necessarily locked in on holding onto the third pick.

“Our scouting staff, I think they’ve done a really great job as far as narrowing down who the top players are in this draft,” Flores said. “We’ll have an opportunity to grab one of them, at least in let’s call it the top 10. But having that type of pick, there’s a lot of other avenues we can go. We’ll explore those also.”

Dolphins can’t get everything they want in free agency

Meanwhile, he offered a realistic assessment on what the Dolphins will be able to achieve in pursuit of veteran free agents:

“I think I’m going to be playing the song, ‘You Can’t Always Get What You Want’ on that Day 1 of free agency, to be honest with you.”

The salary cap tracker Spotrac.com projects the Dolphins’ available cap space at about $33.1 million, including a $15.2 million rollover from last year and $4.6 million in dead space (that includes dead space from releasing linebacker Kyle Van Noy).

The Dolphins have been linked to interest in Packers running back Aaron Jones and Lions wide receiver Kenny Golladay, among others. But they are not set up for the sort of spending spree as a year ago.

Miami’s available cap space is tied for ninth-highest in the NFL with the Detroit Lions.

“We do have some money from a cap standpoint that we can spend,” Flores said. “We may get priced out on some guys that we’d like to have. [Or] they may just want to go elsewhere. …

“We want talented players but we want a good cohesive unit, guys that fit well together. That’s not always 11 stars.”

Flores reiterated his commitment to Tagovailoa, who he called “a talented player,’ and made it clear he has been in close contact with the second-year quarterback.

None of that rules out the possibility of the team taking a different approach to advancing the quarterback position, depending on what opportunities may be available to them — the Texans still say they’re not trading Watson.

The Dolphins will have to address the back-up quarterback role. Retaining veteran Ryan Fitzpatrick is viewed as unlikely.

“We’d love him back but I think this is a very unique year from a cap standpoint,” Flores said, adding that if Fitzpatrick doesn’t return Miami would be seeking someone with similar characteristics in veteran savvy and competitiveness. “There’s a few guys out there. We’ve taken a look at them all.”

The other notable topic Flores touched on was the decision to elevate assistants Eric Studesville and George Godsey to offensive co-coordinators.

“I think continuity was a big thing in making that decision, Flores said. “I wanted that for Tua and really for a lot of the young players we have offensively.”
However, the game-day process of calling plays is still being worked out.

“George has called plays in the past. Eric, with COVID [contingencies in 2020], was preparing to call the game if something happened to Chan [Gailey] the entire year. We’ll figure out a way that’s collaborative but that at the end of the day puts our team in the best position to have success.”

So Flores is preparing to move forward with Tagovaila as quarterback, as well he should. Tua carries all Dolphins hopes at the onset of the NFL year.
Whether that remains the case or changes radically by the time the season begins in September, the dramatic potential remains to be played out over the coming months.

All Jimmy: The Heat’s Extreme Reliance on Butler