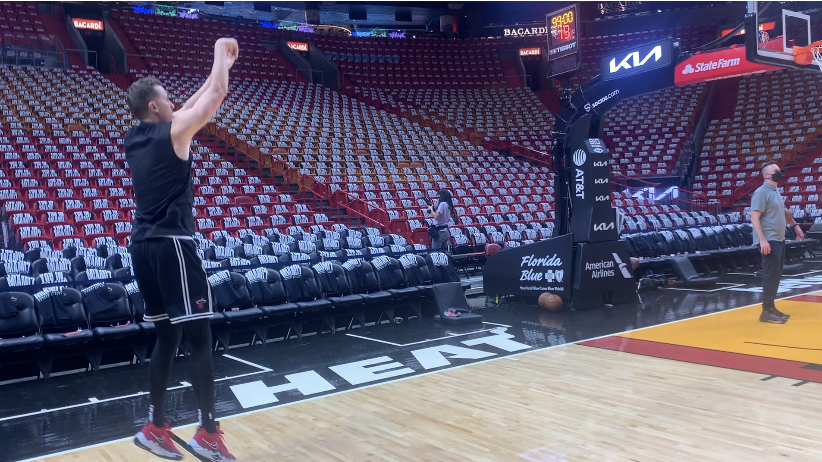 Three weeks into the Heat season, it has become impossible to ignore the noise surrounding Duncan Robinson’s shooting slump.  The topic has become more divisive to Heat Twitter – with some ready to promote Tyler Herro to the starting lineup and others patiently waiting for the slump to vanish.  I decided to look back at NBA history and attempt to identify parallels between Duncan and other three point specialists.  I also analyzed the shot profile from the past three seasons to see how Duncan’s role has shifted on this new Heat roster and how that could be playing into his early struggles.  Finally, I’ll jump into some adjustments that we could see to get Duncan back on track.

When looking historically for a player comparison for Duncan Robinson, it’s almost unprecedented to find a player used so strongly as a three-point specialist.  Obviously the game has changed, and while the NBA added the three-point line in 1979, the volume of shots changed drastically in the past decade.

It’s hard to blame Erik Spoelstra for this usage.  Duncan holds a top 20 career percentage (41.5%) in NBA history.  He shot 42.7% on over 1200 attempts during the past two seasons.  That is why the coaches, his teammates, and opponents continue to respect his outside shot despite early struggles.

Over the Erik Spoelstra era, Duncan is not the first Heat player with a heavy ratio of threes.  Looking at single-season data, the Heat have had players such as Shane Battier, Mike Miller, James Jones, Wayne Ellington, Jae Crowder, Bill Walker, Luke Babbitt, and Yakhouba Diawara with better than 3:1 ratios.  (Bonus points if you anticipated Bill Walker, Luke Babbitt, or Yakhouba Diawara to be mentioned in this article)

With that precedent, clearly Spoelstra is comfortable with Duncan’s utilization.  And while I don’t think anyone would argue adding counters to his game is a bad thing, the Heat are comfortable showcasing the current version of Duncan Robinson.  But with the early season struggles, the elephant in the room is getting harder to ignore – what is wrong with Duncan this season?

After diving down the rabbit hole of Second Spectrum data, I’ve tried to point out a few areas that stand out after 11 games.  I will make it clear that 11 games is a way too small sample size when compared to two full seasons, so remember that we are still early in the season!

With Jimmy, Bam, and the addition of Kyle Lowry, and the growth of Tyler Herro, there is no surprise that Duncan’s opportunities for catch and shoot threes are plentiful.  With those types of attempts up nearly one per game, his effectiveness has plummeted to a putrid 30.0% on those shots.  For comparison, he averaged 43% on those shots over the past two seasons.  He’s shooting significantly higher (50.0%) on one-dribble threes but on nearly six less attempts per game.  I’ll touch on the dribble later, but I can’t possibly buy into the idea that Duncan is better off the dribble.  In most cases, it will lead to a more contested shot because it allows the defender(s) to recover.

The attention drawn by those scorers also allows Duncan to find wide open shots despite the attention that all defenses throw at him.  Unfortunately for the Heat, open shots haven’t translated into made baskets.  Duncan is shooting 31.0% on 3.8 open three-point attempts (closest defender 4-6 feet away), compared to 40.7% last season and 47.7% the previous season on 3.4 attempts.

It’s not surprising that contested shots would have a lower field goal percentage, but the bar is high for a shooter like Duncan Robinson.  Over the past two seasons, Duncan has shot 41% (19-20) and 37% (20-21) on tightly contested three pointers where the defender is 2-4 feet away.  This season, Duncan is shooting 29.7% on those attempts.  Quite simply, Duncan has to be better in order to be considered one of the best shooters in the league.

Finally, one of the intangible powers that is connected to Duncan is the concept of “gravity”.  With such an elite shooter, he draws the attention of defenses towards him, and thus allows his teammates to operate in more space away from him.  Part of that gravity is due to the elite shot making ability he has from outside the arc, but it is also due to the constant movement that Duncan brings to the Heat offense.  In past year’s, defending Duncan meant the challenge of constantly chasing him off pin downs, floppy actions, and DHOs.  This season however, the distance he’s traveling per game is down nearly 12%.

What does that mean?  Being more of a standstill shooter is still a difficult proposition for defenders – staying even a step closer to Duncan makes help on drives more difficult, but it is certainly easier than chasing him around screens.  While not making too much of body language, Duncan cannot allow performance to impact effort.  His constant movement fatigues his defender and will continue to draw the attention of all five defenders on the floor.  Until teams completely disregard Duncan as a non-threat, he can impact defenses with his movement.

So what is the counter?  We had belief after this offseason that Duncan was adding to his game and anticipated something like a shot fake into a 1-2 dribble pull-up.  With defenders closing hard to take away the arc, it seemed like a natural progression to allow Duncan to contribute inside the arc.  After 11 games, Duncan has attempted eleven shots inside the lane and one mid-range jump shot.  The one mid-range jump shot made me check multiple websites to verify because it seems almost unfathomable.

Over the past two seasons, he only attempted 35 of these mid-range shots and was largely ineffective.  I trust that this was part of Duncan’s offseason training because he said it himself on The Long Shot podcast.  How is it possible that after 11 games, he has just one attempt in the mid-range?

Could it be not so much what type of shot he is getting, or where those shots are coming from, but when those shots are happening?  Looking at last season’s data, Duncan’s three-point field goal percentage drops the deeper you get into the shot clock.  Why?

When Duncan is getting opportunities very early in the shot clock (18 seconds or earlier), you’d expect to see him running to the wing or the corner and getting hit ahead passes in transition.  Last season, Duncan shot 43.9% on just over 1 attempt per game.  The frequency of these attempts are understandably low, but it more importantly the threat forces the defense to defend sideline-to-sideline and baseline-to-baseline and opens up the middle of the floor for others to attack. That’s the base layer for any transition attack.

Much as been argued about the use of DHO but when utilized early in the offense as part of their secondary break, it allows an opportunity for Duncan to get loose (41.7% on attempts between :15-:18 on the shot clock) but also still provides enough time for the ball to switch sides of the floor and get to the next best action.  While some point that the Heat are “trying to get Duncan going” with the early DHO, it’s just part of layering actions together and much less about force feeding Duncan Robinson.

As the shot clock gets under seven seconds, it becomes problematic for Duncan to touch the ball.  His three point shooting percentage is sub-38% in these situations over the past season and even worse this year.  If he is not getting a catch and shoot opportunity, the odds of a successful possession drop significantly.  For all Duncan is great at, he’s not a great creator with the dribble or the pass.  It often leads to a poor shot, turnover, or shot clock violation.

As mentioned before, Duncan’s three point ratio is almost unmatched in league history.  He’s a unique and very talented shooter, but I believe diversification needs to occur to balance nights when the outside shot isn’t falling.  Instead of a 6:1 ratio, Duncan needs to trend more towards the ratios of historical comparisons like Danny Green (1.8), Kyle Korver (1.6), Joe Harris (1.3), and JJ Redick (1.1).  I’d be much more comfortable with a ratio near 3:1 than his current pace.

Although he’s surprisingly fairly effective finishing inside the restricted area, the focus should be on adding mid-range counters.  The problem is that growth occurs in the offseason not during the season.  So I wouldn’t expect to see drastic changes from Duncan’s shot profile anytime soon.

The Heat should continue to utilize him early in their secondary break, and then allow the offense to flow into the next best action.  This doesn’t mean that Duncan needs to be part of every initial action, but he cannot be effective if utilized as a standstill shooter.

That being said, I’m also a strong believer that the 1200+ shot sample size from two full seasons holds more value than less than 100 shots in the first 11 games.  While it appears to have become a mental struggle, he won’t be the first or last shooter to enter a slump, and so the most important signal for Heat fans is that they continue to create good shots opportunities for him to take and turn around this slow start.

With Butch Davis departing, is it time for FIU to drop football?
Scroll to top