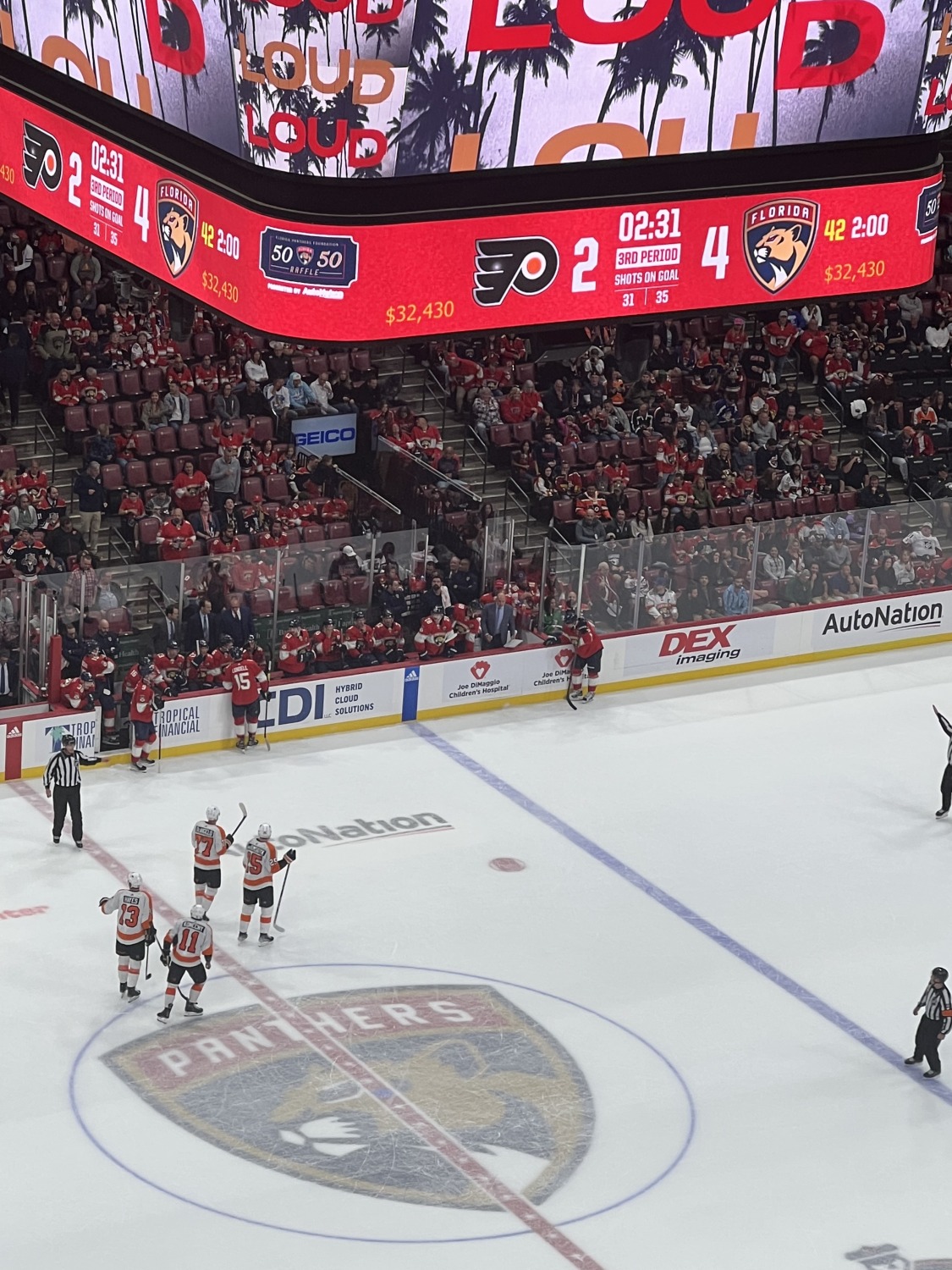 SUNRISE – After being the best team at home last season, the Florida Panthers returned to FLA Live Arena for their 2022-2023 home opener.

The Cats didn’t disappoint the home fans as they defeated the Philadelphia Flyers 4-3, moving to 3-1-0 on the year.

Here are the takeaways:

Verhaeghe gets into the scoring flow

Carter Verhaeghe performs well at home, look back at Game 5 of last year’s first-round against Washington. It was no different tonight,

Entering the game, number 23 was pointless through his first three games of the season, all of which were on the road. Verhaeghe didn’t let this early season slump affect him at the home opener. Six minutes into the first period, Verhaeghe sniped a shot past Flyers goalie Felix Sandstrom, giving the Panthers a 1-0 lead and Swaggy his first goal of the season.

Verhaeghe wasn’t done there. Just a few minutes after his first goal, he bursted through the neutral zone, catching a stretch pass from Gustav Forsling. Verheaghe, who is extremely effective off the rush, didn’t waste the breakaway chance, tucking the puck right under Sandstrom’s glove for his second of the game.

Aleksander Barkov, who didn’t even realize at morning skate that tonight would be his 600th game, showed one again why he is the franchise player, he played his game.

Defensively, the former Selke winner continued the little things which have made him a household name across the National Hockey League. The little things being his positioning on the blue line when the Flyers were trying to get zone entries on the power play, his aggressiveness in corner battles and his overall presence across the ice.

Offensively he was no different. Barkov picked up two assists in the first period and could have easily had two more throughout the game. He was sprinign his teammates open with subtle but extremely effective passes.

We’ve seen this game for nearly a decade from Barkov and once again we witnessed his worth to the team tonight after seeing it 599 times before.

The defense had a new look

With the news today that No. 1 defenseman Aaron Ekblad is on LTIR, which would see him miss at the minimum 10 games and 24 days, the Panthers blueline was looking depleted. The problems didn’t get any better with Brandon Montour missing tonight’s game. The Panthers had to call up Matt Kiersted and Lucas Carlsson for their season debuts.

Gustav Forsling, who already jumped into a top-two role this season with the departure of MacKenzie Weegar once again saw him get a bump with Ekblad out.

The blue-line was a unique one tonight. Forsling and Kiersted started as the top unit, both of whom are left-handed shots. Carlsson was paired with Marc Staal while Radko Gudas was alongside Josh Mahura.

The scoresheet saw some points on the scoresheet, with Mahura getting a goal, while Forsling and Gudas picked up some helpers.

The blue-line being in a blender didn’t seem to be a problem, with the Cats coming out on top tonight.

Paul Maurice said Brandon Monotur is expected to be a full participant in the next Panthers practice, he was also on the ice for morning skate. Getting him back in the lineup is huge for the Panthers.

It can take time for players to get adjusted to a new team and this year’s Panthers squad has a lot of new bodies.

With the 2022-2023 Panthers home opener, some of the new Cats showed out to the contingent at FLA Live Arena.

With his linemates already on the goal sheet this season, Rudolfs Balcers was ready to get in on the action. After a great pass from Sam Bennett, Rudy was free on goal. The Latvian national stayed composed, sold the shot and went bardown on the back-hand to make his first goal as a Panther one for the highlight reel.

Balcers wouldn’t be the last new acquisition to get the South Florida crowd on their feet. Josh Mahura was a waiver pickup right before opening night and slotted himself directly into the lineup. Tonight he showed his offensive skill to the home crowd.

Mahura walked into the zone and fired the puck across his body, beating Sandstrom right below the glove. Both Mahura and Balcers completed the goals with picture perfect cellys.

And not to forget, Matthew Tkachuk picked up two assists tonight in his home debut.

It’s good to be home

South Florida sports fans had a few decisions to make today as both the Heat and Panthers played their first home games of the season.

Panthers fans made it known, as they did many times last season, they love their team. FLA Live Arena was loud tonight. Whether it was the infamous “ref you suck” chant or the Ric Flair “WOO”, Sunrise was the place to be tonight.

Every big Bobrovsky save, which he had a lot in the third, was accompanied by large rounds of applause. The final goals of the game had the building on its feet. This place was bumping.

The players were feeding off the energy,

“They’re excited to go play in front of their fans and it’s a good live building,” Paul Maurice said post-game. “I think there’s a good synergy there because I think the fans are having fun, the players on the bench, like they’re working hard but they’re having fun.”

Panthers hockey is back in South Florida.

Mateo’s Hoop Diary: Not Enough From Joel Embiid in the Season Opener

Five takeaways from Panthers loss to Flyers
Scroll to top