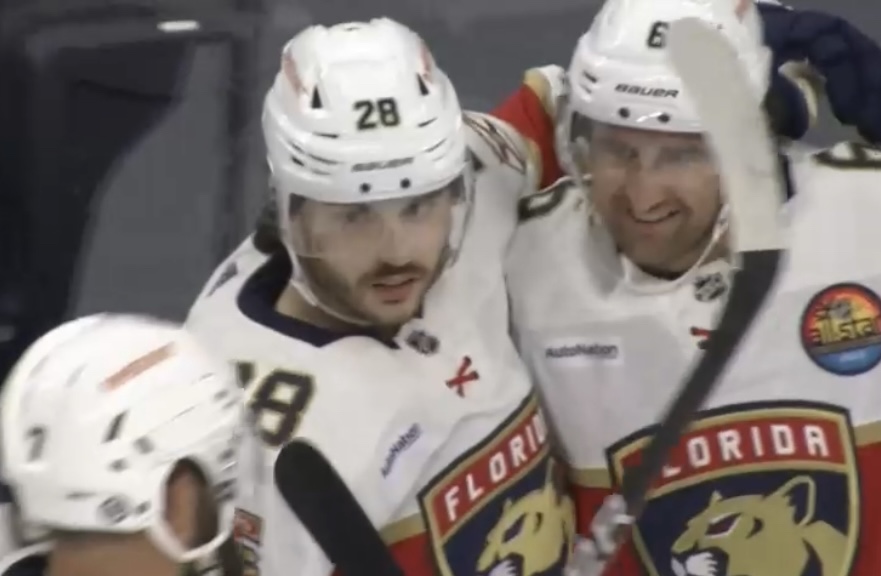 Florida made their way to the City of Brotherly love for their second meeting of the season against the Philadelphia Flyers.

The Panthers won the first meeting 4-3 in Sunrise a week ago, but the Flyers got their revenge in Philadelphia with a 4-3 win of their own.

A power play goal has been scored

Every time the Panthers play, the big problem staring them in the face is their lack of success on the power play.

Entering tonight Florida was 2/33 on the power play. The first two periods in Philadelphia looked much the same, with Florida going 0/2 on the man-advantage.

However, all things come to an end and the Panthers power play drought, which had not seen a goal since Oct. 15 was one of those things tonight.

Brandon Montour, who scored the last Panthers power play goal two weeks ago once again found the back of the net, giving the Florida power play a much, much needed tally.

Florida only got one power play goal on their four attempts tonight, but it’s a start in the right direction.

The defense was the offense?

Florida’s roster is made up of quite a few guys that are more than capable of burying 30 goals over the course of an 82 game season.

So who scored the Florida goals tonight? Yes, the defenseman.

All three goals by the Cats tonight were scored by the d-corps; Forsling, Mahura and Montour.

The blue liners were finding open lanes and jumping up in the play all game. Florida’s defenseman had 17 shots on goal in the game.

With the forwards not finding the back of the net, it’s good to have your backend hold it down offensively.

Philadelphia’s 24-year-old goalie Carter Hart was the main reason why the Flyers got out of this one with two points.

Hart was lights out, finishing the game with 47 saves. In the final minutes of the third period, Florida was sending everything they had towards goal, but Hart wasn’t having any part of that.

Hart improves his season record to 5-0-0 after tonight’s game.

Reinhart and Barkov are still goalless

For the first seven games of the season, Sam Reinhart was next to Aleksander Barkov on the Panthers top line. Tonight, the pair was split up as their offensive production hasn’t been there, with the duo not having a single goal to their name this season.

The two combined last season for 72 goals during the regular season.

Following tonight’s game, the number still stays at zero, though they both picked up assists in tonight’s one goal loss.

Reinhart and Barkov are two of the best goal scorers on the team, as they showed frequently last year. But the lack of goal production has hurt the team, specifically in close games like this. They need to find the back of the net soon.

The third line has been the most consistent one for Florida all season.

With Anton Lundell being the staple down the middle and Eetu Luostarinen getting the bump to a top-9 winger role, the Finns have been clicking.

The other member of this highly-effective line is first-year Panther Colin White.

White doesn’t see the ice as much as Lundell and Luostarinen as he’s not in the special teams rotation, but when he’s out there 5-on-5, he seems to get the job done.

White picked up an assist tonight on Mahura’s goal, making it his seventh point in eight games.

During his last few years in Ottawa, White was setback by injuries and ended up getting bought out this summer. He seems to have found a new spark in South Florida, becoming a much needed player on the wing.