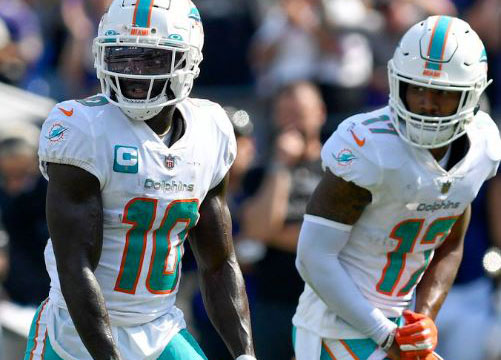 It looks a lot better concealed in a 5-3 ledger — which keeps Miami in the thick of the AFC East race — than it did in the light of day.

Falling behind 14-0 and 21-7 against a 1-5 team (now 1-6) that didn’t score a touchdown and only six points total the previous two games was ominous for a team with playoff aspirations.

Jared Goff shredded Miami’s injury-riddled secondary like soft cheese and special teams got burned on a fake punt during the Lions’ 27-point first half.

Fortunately, the Dolphins have an unstoppable force named Tyreek Hill, who had 12 catches for 188 yards and is on pace to break Calvin Johnson’s single-season receiving record and the first 2,000-yard receiving season. The Cheetah had two key catches on the final drive that sealed the win, and was clearly the best player on the field all day.

Tua Tagovailoa turned in one of his best performances: 29-for-36 for 382 yards three touchdowns, no interceptions and a 138.7 rating. The accuracy absent last week in Tua’s return from a concussion (or two?) was back to his standards Sunday.

He threw some beauties, such as the second of two touchdowns to Jaylen Waddle.

tua to waddle for their second TD of the day 🎯 pic.twitter.com/CGjlO2troe

Hill’s sidekick Waddle had another 100-yard receiving day (eight catches for 106 yards), and with 727 yards and five touchdowns is tracking toward a 1,500-yard season of his own.

Meanwhile, Mike Gesicki had another TD-grab as he becomes more of a factor in the passing game, and Trent Sherfield continues to contribute timely catches.

All of those gaudy numbers on offense (476 total yards including 107 rushing) are fun to talk about and the replays entertaining. Particularly after the Dolphins failed to score 20 points in the previous four games.

Essentially, Tua and Co. finally delivered what has been missing since the 28-point fourth quarter against the Ravens in Week 2. They needed every bit of it to outlast one of two remaining one-win teams in the league.

It was a win to feel grateful for but queasy about after watching Goff and the Lions score on all five first-half possessions.

The Dolphins’ offense consumed most of the third quarter with nearly 11 minutes of possession and the defense got a vital fourth-down stop on Detroit’s final drive of the game.

Luckily Tyreek creates so much separation and is such a great high point WR they can afford a 5+ yard under throw on a 30 yard completion https://t.co/wCxmQg0loL

For the Dolphins, moving on means trying to somehow put together a patch for a secondary that is going to be targeted every week. Brandon Jones and Nik Needham are gone for the season and it’s beginning to look like veteran cornerback Byron Jones may not surface at all. He has yet to practice since offseason ankle surgery.

There just isn’t a cache of viable defensive backs lurking on the waiver wire and practice squads midway through the season.

Odd that veteran Erik Rowe was left inactive Sunday. Supposedly it was for the benefit of special teams, which didn’t exactly justify the decision as it turned out.

Surely, some unemployed DBs will be brought in for auditions. Realistically, thought, the current cast is going to have to cowboy up and hope to get more help with pressure up front than we’ve seen.

Good news for Miami is the Dolphins are into the softest stretch of the season: Bears, Browns, Texans, 49ers, Chargers in the next five games. All currently under .500 except the 4-3 Chargers.

Those are winnable games, but by no means gimmees. Sunday’s close call at Detroit was proof enough these Dolphins can’t take anything for granted. Not with a defense that showed vulnerabilities early in the season and is now greatly diminished in pass coverage.

So, celebrate the highlight-reel showcase of Tagovailoa, Hill, Waddle Raheem Mostert and the rest of the playmakers. They put on a spectacular show Sunday.

They’ll need to repeat it every week for this team to remain on a playoff course.

Mateo’s Hoop Diary: The Nets Can’t Do Anything Right
Scroll to top