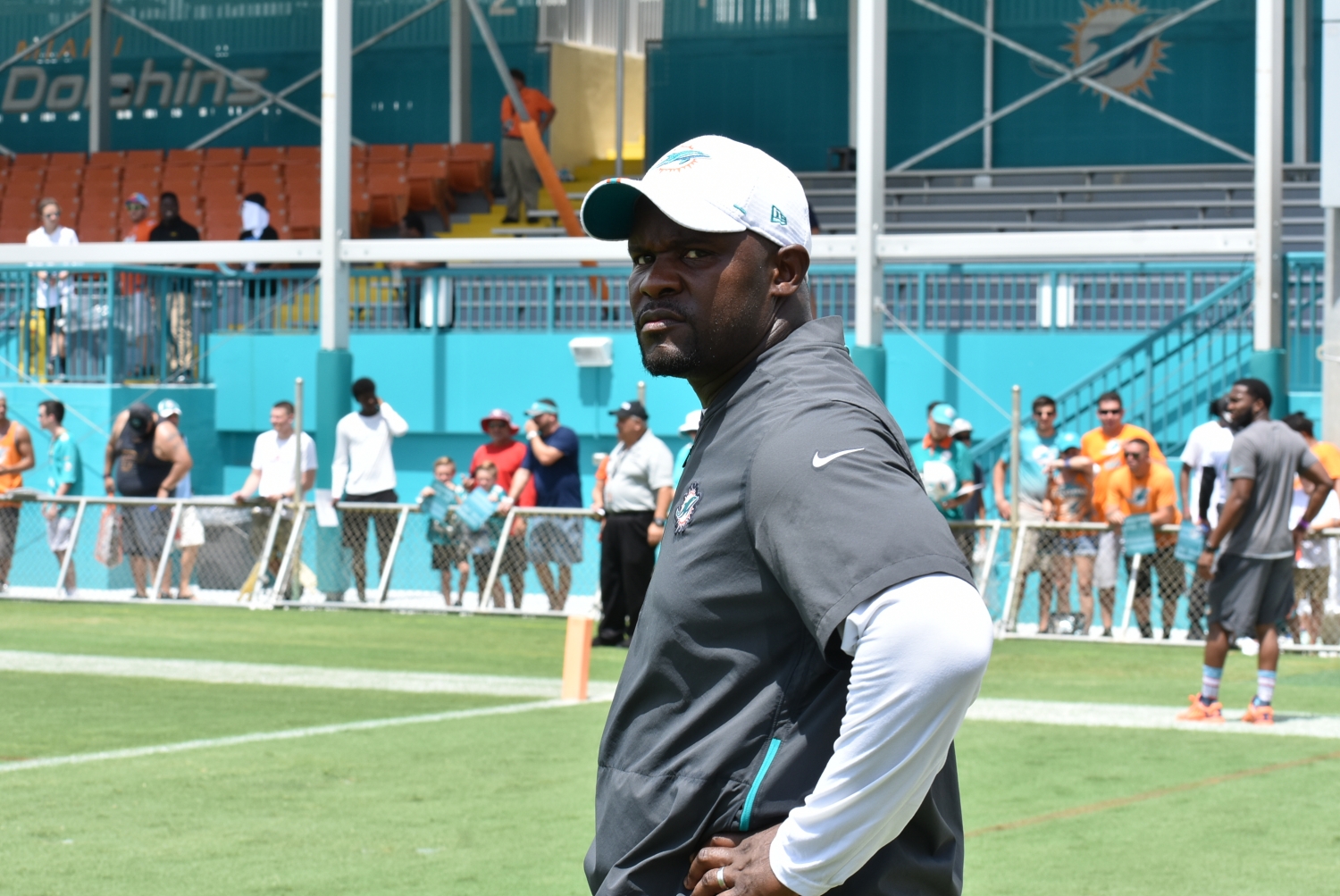 It wasn’t that long ago that the Dolphins world seemed to revolve around losing every game possible in 2019. Nothing mattered except getting the first overall pick so Miami could draft their franchise quarterback. Never mind the consequences of such a strategy. Did it matter that the NFL frowned upon that strategy? No. All that mattered was throwing 2019 in the trash. Pride didn’t matter, most of the roster wouldn’t be back anyway. Some even said Brian Flores is a sacrificial lamb for the future head coach.

Except there was one problem. Pride does matter, and the Dolphins proved it last season, taking a roster of street players and undrafted free agents to a five win season when most experts projected them to win one game at most. Instead they won five, including a massive upset in Foxborough which ultimately knocked the New England Patriots out of the top seed in the playoffs. That game now will be Tom Brady’s final game against Miami in a Patriots uniform. He went out with a whimper, instead of a roar.

The purpose of pointing this out is directly related to Miami’s recent spending spree. All throughout the 2019 season, the Dolphins were judged for draining the roster of big name talent. They traded Ryan Tannehill and Cameron Wake, they traded Robert Quinn, they traded Laremy Tunsil, Kenny Stills, and then they traded Minkah Fitzpatrick when he threw a temper tantrum over how he was being used on the field as well as – presumably – Miami’s intention to tank 2019.

Fitzpatrick’s reaction is the most telling of all. Some will say Fitzpatrick was immature in forcing his way off the Dolphins to go join the Pittsburgh Steelers. To be fair, they aren’t wrong. But there’s another factor to this. Fitzpatrick wanted to be on a winning franchise. He’s used to success from his college days at Alabama. Regardless of the team’s true intentions, the image they were portraying was of a team doing everything they could to secure the first overall pick in next year’s draft, not win games. Action speaks louder than words.

Pundits went on a rampage, tearing into the franchise for seemingly trying to lose games. Mike Greenberg, Steve Young, Domonique Foxworth, Mike Golic, the list goes on. They all went out of their way to explain why Miami’s tanking efforts were not just bad for the team, it was bad for the NFL. Players don’t like the idea of throwing their careers away on a team that doesn’t want to win. There were even reports that – after a 59-10 loss to the Ravens – players were coordinating with their agents to manufacture trades out of Miami.

Someone needs to deal with this before it becomes a problem. #NFL @getupespn pic.twitter.com/8u0OCw15yx

Whether there’s any truth to those reports or not is irrelevant now. One thing remains correct through all this. No player wants to play for a team that doesn’t want to win. Fans didn’t really care though, they just wanted the first overall pick regardless of the consequences. When the Dolphins started winning games, fans began getting worried. Could it really be that Miami couldn’t even lose properly? How could Brian Flores do such a thing? He was jeopardizing everything the team was striving for with his irrational pride and refusal to give up in spite of the front office’s talent-draining efforts.

Thank you, Brian Flores, for not giving up and knocking the Dolphins all the way down to fifth overall.

Obviously, it’s easier for teams to get the player they want when no one is in their way to stop them. Now, Miami has the Detroit Lions and the Los Angeles Chargers to worry about if they want their quarterback of choice. But there’s something bigger to consider, and it has everything to do with the Dolphins and their recent free agent frenzy.

Players want to come to Miami.

Generally, money is the deciding factor for most new contracts. Additionally, the Dolphins aren’t being shy about spending it either. The free agents they’ve signed so far are cashing in with Miami. That’s not the reason they’re coming though.

Ted Karras, one of the Dolphins’ most recent signings, reportedly took less money to come to Miami instead of staying in New England. The reasoning is that with the Dolphins he’ll be a starter, while in New England that’s not guaranteed. Fair enough. But if the Dolphins tanked the season, do you think Karras would be willing to give up money to go a team that one year prior didn’t care about the outcome?

Byron Jones, the biggest free agent signing thus far for the Dolphins, had multiple teams bidding for him. In the end, Miami was willing to pay the most. But no player worth having wants to play for the money alone. They want notoriety, they want success, and Brian Flores showed that a team can have success without household names leading the charge. Five wins with the roster he had last season? Players believe in the vision that Brian Flores is selling, and they want in on that vision.

I won’t sit here and pretend more money isn’t a major deciding factor for free agents, especially with no state income tax in Florida. But anyone who believes that money is the only reason players like Jones, Ereck Flowers, Kyle Van Noy, Shaq Lawson and Jordan Howard are joining up with the Dolphins is fooling themselves.

The players who already know Brian Flores from their New England days (Van Noy, Karras) have nothing but great things to say about him. The players who don’t know Flores, saw what he and the staff was able to do with the likes of Nik Needham, Mike Gesicki and DeVante Parker, disappointing players who miraculously turned their careers around in a season assumed to be wasted. They want to be put in the best possible position to win while still getting paid. Think of Emmanuel Ogbah for this.

Need more proof? Look how averse players seem to be to go to the Cincinnati Bengals. Rumors were abound that LSU QB Joe Burrow didn’t want to be drafted by the Bengals. He later refuted that report, but nonetheless it did start for a reason. Tua Tagovailoa’s agent literally went on-air and said that he hopes that the Bengals draft Burrow because he wants Tagovailoa to be in a good position to find success. Clearly, he believes that’s the Dolphins, not the Bengals.

Talking with @leighsteinberg asked his client Tua, and if he wants him to go No. 1 in upcoming #NFLDraft

“You want to make sure that your client ends up with a good organization….I’m hoping Cinncy falls in love with Joe Burrow".

It isn’t just about the money, folks. Brian Flores is creating a culture of accountability and success. Players who don’t want to be a part of the vision, they can leave. Minkah Fitzpatrick is the perfect example. But these players coming in want to be part of the vision. They see the light at the end of the tunnel and want to stand in it when the Dolphins get there. So thank Brian Flores for killing the tank narrative in 2019.

They’re reaping the benefits of his efforts right now, and perhaps for many years to come.