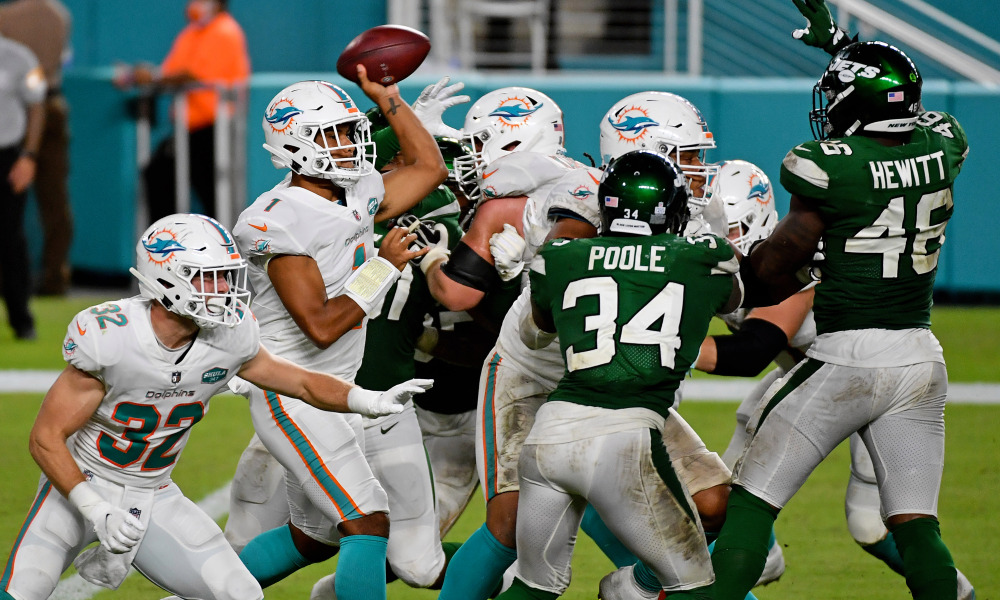 There’s no denying that the NFL suffers from a severe case of recency bias. Fans and analysts alike always choose to focus on the players putting on the greatest show, regardless of previous performance or reputation. When Jakeem Grant returns a punt for 80 yards and scores a touchdown, everyone loves him. When he drops a key pass, fans call for him to be cut. The same, unfortunately, applies to Tua Tagovailoa.

Thrust into the starting role after the Week 7 bye, Tagovailoa has gone through plenty of ups and downs. His stats don’t inspire awe, nor has he found a way to keep comparisons to Justin Herbert at bay. On top of that, Tagovailoa has now been benched for veteran Ryan Fitzpatrick twice. In Week 11 against the Denver Broncos, Fitzpatrick came in and provided a spark to the offense after Tagovailoa failed to get the team driving. Fitzpatrick got the team within one score, but threw an interception in the endzone which allowed the Broncos to  win.

Then last week against the Las Vegas Raiders, Tagovailoa went 17 of 22 for only 94 yards and a touchdown. The entire game, Tagovailoa was not able to find a way to consistently drive down the field, leading to his benching. Fitzpatrick immediately came in, and the offense started moving the chains and scoring points, almost as if a fire had been lit under them. It’s hard to deny the difference in how the offense looks depending on who is throwing the football. It becomes even harder to ignore when Chargers rookie QB Justin Herbert regularly puts together 300+ passing yard games.

As of now, betting odds have Herbert on the fast track to offensive rookie of the year. Tagovailoa, on the other hand, isn’t likely to win that honor. The one thing that sets the two apart in Tagovailoa’s favor, is that Tagovailoa has a 6-2 record as a starter. Herbert, in spite of his huge numbers, is only 5-9. It’s hard to argue with end results, but wins are rarely a relevant tool in evaluating quarterbacks. So what kind of an argument can be made to suggest the Dolphins didn’t make a mistake drafting Tua Tagovailoa over Justin Herbert?

As a matter of fact, it’s fairly simple.

When you look at Justin Herbert, you see a quarterback who is a gunslinger. He has a cannon for an arm and takes risky shots that result in big rewards if it works out. For Herbert, he’s been lucky so far. He has 28 touchdowns and only ten interceptions on the season. The offense he’s in has been adapted to allow for plenty of opportunity for him to shine. Plus, as a gunslinger, it was always a strong possibility he would find early success. Big plays make or break games, and Herbert’s arm and throwing style make for several opportunities for big plays. He also has several playmakers to get the ball to. Keenan Allen, Austin Ekeler, Mike Williams, Hunter Henry, it’s an impressive list.

Tua Tagovailoa, on the other hand, is a completely different quarterback. While Tagovailoa had several big plays of his own while at Alabama, he is not a gunslinger. Tagovailoa is a cerebral quarterback, someone who looks for the open receiver and takes whatever the defense is willing to give. His comparison coming out of college was Drew Brees. Accurate, discerning, able to read defenses quickly. But he does not appreciate throwing into tight windows.

“Sometimes you’ve got to just take the shots.” Tagovailoa said after the Raiders game. “You’ve got to give guys an opportunity and you got to just get the ball down the field because time is running out and we don’t have all day to just think here, think there and try to move the ball that way … I’m going to continue to take what the defense gives me. If I feel like that’s not open, I’m not going to throw it. And so it’s I got to get better at that. That’s it.”

This is where the problem lies. Tagovailoa wants players to be open. He wants them to get separation from the defenders. In Alabama, that happened on a regular basis. Jerry Jeudy, Henry Ruggs, Jaylen Waddle, they were able to get themselves open and Tagovailoa would find them and get the ball to them. Easily.

In Miami, the talent level at the skill positions is vastly different. DeVante Parker’s claim to fame is making difficult, contested catches. Tight end Mike Gesicki is the same way. Jakeem Grant is the fastest receiver on the roster, and not only does he have struggles with drops, he’s now injured. Lynn Bowden has potential, but he’s a rookie. Malcolm Perry is a former Navy QB being converted into an offensive weapon. Preston Williams has not played since Week 9 and is on injured reserve with a foot injury.

What is left for Tagovailoa to reach out to?

#Dolphins Tua Tagovailoa has the second-highest percentage of throws into tight coverage in the league at 22.8%.

Fitzpatrick has the third-highest at 21.7%.

Russell Wilson and Mahomes have the lowest, each below 11.5%.

To add to the pile of factors working against the former Alabama superstar, offensive coordinator Chan Gailey clearly prefers to call plays for Ryan Fitzpatrick. Their shared history with the New York Jets added to Fitzpatrick’s gunslinger mentality, it’s not an exaggeration to state there are two different playbooks depending on who is at quarterback.

Fair or not, this is what Tua Tagovailoa is dealing with. In essence, his offensive coordinator does not trust him to run the same type of plays that Fitzpatrick does. It’s a mystery as to why Gailey feels that way about the rookie. Tagovailoa’s best performances are when he has an empty backfield and a no-huddle offense. So why is Gailey forcing Tagovailoa to function in a heavy playaction offense with lots of read-option plays?

Gailey insists that it’s about the gameplan, not the players involved in said gameplan.

Yet the evidence seems to suggest otherwise.

Some splits I put together watching the film.

There is 100% a different playbook or at least different concepts for each QB. It was drastic against LV tho. pic.twitter.com/2ar0LJcAlk

With all this in mind, there’s no denying that Tua Tagovailoa is being handicapped somewhat. His lack of reliable weapons along with an offensive coordinator who prefers to call plays for a gunslinger QB gives him few opportunities to prove himself. But there have been opportunities that Tagovailoa simply hasn’t taken advantage of, and it has everything to do with his struggle to make the adjustment to the NFL.

At Alabama, he had wide receivers running open on a regular basis. In the NFL, the windows are much tighter. Fitzpatrick finds success (or failure) because he’s willing to test those windows without hesitation. Tagovailoa isn’t willing to do that yet. It will take some time for him to grow into the role, plus get some weapons he can feel more comfortable throwing to.

It took five years for Drew Brees to become the future Hall of Famer we know today. The San Diego Chargers gave up on him before he became a superstar. Will it take five years for Tua Tagovailoa? Hopefully not. But the fact of the matter is, when a quarterback’s bread and butter is picking apart defenses like a surgeon instead of testing them with a cannon, there’s a learning curve that must be considered during evaluation.

Miami did not make a mistake picking Tua Tagovailoa over Justin Herbert. They simply chose a quarterback with a higher ceiling, and a longer development time. It’s easy to feel frustrated watching Herbert make the highlight reel on a regular basis. However, Tagovailoa will soon reach his stride. He’ll learn to trust his receivers, he’ll get an offensive coordinator who will allow him to spread his wings, and soon enough his numbers will follow. Just have patience.

Pressure Point: FitzMagic saves Dolphins, but don’t give up on Tua