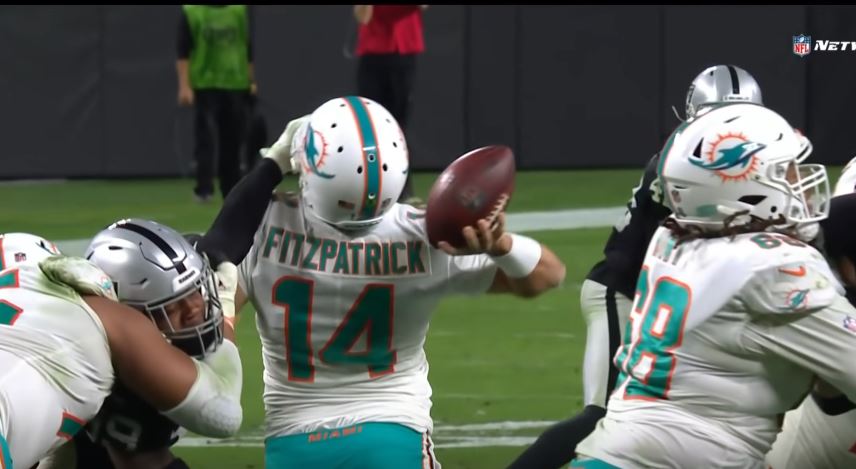 Leave it to Miami Dolphins fans to turn a heart-stopping, season-saving win into a quarterback controversy.

If only in their minds.

Immediately after Ryan Fitzpatrick came off the bench Saturday night to lead an improbable comeback to a 26-25 victory over the Raiders, coach Brian Flores said rookie Tua Tagovailoa will remain the starter when the Dolphins roll the final dice for the playoffs next week at Buffalo.

Much to the consternation of a segment of the fan base that in rapid order went from longing for the Dolphins to draft Tua to already writing him off because:

Meanwhile, overlooking that the Dolphins are 6-2 in games Tagovailoa has started — though, obviously, Fitzpatrick gets credit for pulling off the Day After Christmas Miracle.

Flores said Tua has done a lot of good over season and brushes off outside opinion on which qb should play. pic.twitter.com/FPRPrHa5t1

Fitzpatrick’s heave down the sideline to Mack Hollins while his head was being twisted in the opposite direction by a Raiders defender to set up the winning field goal immediately earned a prominent place in Dolphins lore.

Up there with the Duriel Harris-Tony Nathan hook-and-lateral, the Marino fake-spike “clock” TD toss against  the Jets and the 2018 Miami Miracle win over the Patriots.

“They call him ‘FitzMagic’ for a reason,” observed Tagovailoa, who was reduced to spectator in the fourth quarter as Fitzpatrick led three scoring drives (a touchdown and two field goals).

You’ve gotta love Fitz, for who he is and for what he’s done and meant to the rebuilding Dolphins the past two seasons.

He certainly is a luxury item at this point and a valuable ace in the hole to play in situations like the Dolphins were in needing a spark to keep their playoff chances alive.

with the playoffs on the line, @miamidolphins HC brian flores pulled his young rookie QB for the 16-year veteran.#fitzmagic completed 9/13 passes for 182 yards & a TD. most importantly, he led three 4th-quarter scoring drives (1 TD, 2 FG) & made THAT throw.

yes, this is real. pic.twitter.com/sqZatV3Xti

Flores: ‘Whatever we need to do to win’

On Sunday, Flores was asked if he is utilizing a two-quarterback situation with Fitzpatrick as a closer.

“I don’t want to put any labels on it. The label is we’re going to do what we’ve got to do to win,” Flores said. “I owe that to Dolphins fans, to players in our locker room, to people in this organization, so that’s what we’re going to always do.

“Whatever we need to do to win, that’s what we’re going to do.”

There are plenty of voices out there shouting that the objective would be better served by starting Fitzpatrick next week at Buffalo. While others will continue grumbling that the Dolphins messed up by drafting Tagovailoa instead of Herbert, who is having a historic rookie season for the non-contending Los Angeles Chargers.

Even though Tagovailoa outplayed Herbert in the Dolphins’ 29-21 win over the Chargers in November.

And while overlooking that Tagovailoa’s struggle against the Raiders aren’t indicative of his season overall.

Tua did have a similar subpar performance against the Broncos, also on the road, which prompted another fourth-quarter relief appearance by Fitzpatrick. But he followed that up with back-to-back Rookie of the Week efforts.

“Tua has brought us a spark in a lot of other games. I think people just forget that. We just remember the last thing,” Flores said Sunday. ”I think Tua has played well.  I think he’s made a lot of improvement over the course of the season. I think he is developing.

“Tua has done a lot of good things for this team. He knows that, this team knows that.”

Dolphins fans have been fixated for so long on the quest for a franchise quarterback that some of them are having trouble appreciating one of the most remarkable seasons in franchise history.

A year ago, after tearing down the roster and starting 0-7, they were being called one of the worst teams in NFL history.

Now they are 10-5 and one win away from the playoffs.

NFL teams aren’t built in a single draft. Yet the Dolphins, under Flores and GM Chris Grier, have already constructed a playoff-caliber defense and improved the offensive line. They have four picks in the first two rounds of the next draft and one of them may again be in the top five.

#Dolphins up to the 5-seed thanks to yesterday’s wild win and the results today. Could mean a 1st rd matchup with Ryan Tannehill & the Titans. #FinsUp @5ReasonsSports @5ReasonsFins

The offense will look different next year. There will be more playmakers and Tagovailoa will already have the experience of playing in a playoff race — potentially of playing in the playoffs, depending on how next week goes.

The Should-Have-Drafted-Herbert crowd isn’t going away. Neither is Tua.

He has a lot of improving to do. The same could have been said about plenty of Hall of Famers during their rookie year.

Look at Drew Brees, whose tools are similar to Tua’s. In his first season as starter, Brees threw 17 touchdown passes with 16 interceptions while completing 61 percent of his passes. The next season he had 11 TDs, 15 picks and a 57.6 completion percentage.

It wasn’t until his third season that Brees took off with 27 TDs, seven picks and 65.5 percent completions.

Josh Allen, who in his third season is putting up MVP-type numbers while leading the Bills in quest of the Super Bowl, as a rookie had 10 TDs and 12 interceptions while completing 52.8 percent.

Tagovailoa, coming off a career-threatening injury at Alabama and with no preseason, has completed 65 percent with 10 TDs and two interceptions. Yes, there have been a number of would-be picks dropped, including another Saturday.

His receivers have dropped quite a few on-target throws as well.

There are valid criticisms. Tua tends to hold the ball too long in the pocket and hasn’t had much success hitting longer routes.

Offensive coordinator Gailey’s play-calling often isn’t suited to what Tagovailoa does well — as if he’s keeping the training wheels on him.

According to the NFL gamebook, Miami went No Huddle only three times last night, one of which was with Tua at QB.

Over previous 3 weeks w/ Tua at QB, Dolphins were 2nd in the NFL behind Arizona w/ 65 No Huddle plays, tied w/ them for the most 'successful' No Huddle plays (41).

Nonetheless, Tagovailoa’s rookie year has shown he can be a winning quarterback. Because, well, they’re winning with him now.

Flores looks at a broader picture than fans and media members, and he gets the last word on the matter:

“Speculation on whatever people want to speculate about as far as what we should or shouldn’t do, based on [Saturday] night, I think I wouldn’t do that and forget the body of work over the course of the season to include however many games Tua has been starting,” Flores said Sunday.

“I think he’s played fairly well. People may disagree, but we’ll just have to just agree to disagree in that instance.”

But if things aren’t going well at Buffalo, don’t be surprised if Flores resorts to another dose of FitzMagic  one more time.

Pressure Point: Dolphins deliver joy to fans, so enjoy it