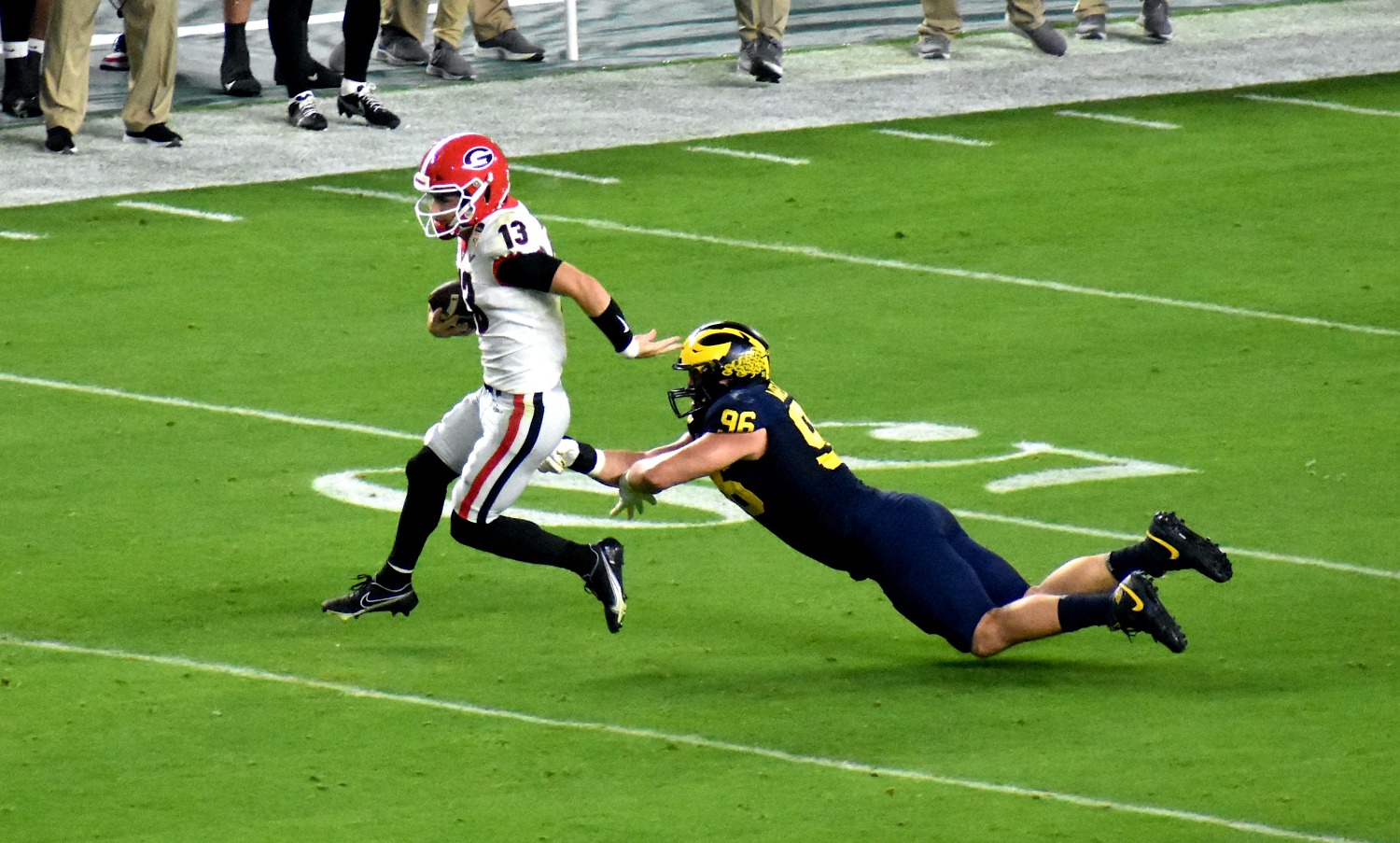 It’s becoming common place for the iconic Queen song “We Are The Champions” after bowl games, especially one as big as the Orange Bowl. The timing of Michigan quarterback J.J. McCarthy watching the celebration from a distance with a few teammates only to leave on the lyrics “no time for losers” was poetic.

The Orange Bowl championship used to mean something but now it’s just another game on the road to the real prize.

“We didn’t do our everything we did this whole season just to win the Orange Bowl,” Georgia linebacker Nakobe Dean said.

Just like the previous matchup between Alabama and Georgia on this stage birthed the legend of Tua Tagovailoa, the same could possibly happen for Stetson Bennett IV. Tagovailoa came in for Jalen Hurts to rally Alabama to an overtime win in the 2018 National Championship Game. All Bennett has to do is break Georgia’s seven-game losing streak to Nick Saban’s Crimson Tide in next week’s title game.

Among the quarterbacks leading the cream of the crop, Bennett has the story of an underdog. He came to Georgia as a walk-on, then left for a year in junior college only to come back and eventually take over for JT Daniels, who transferred from USC and led the Bulldogs to a Peach Bowl win over Cincinnati a year ago.

He completed all but 10 of his 30 passes for 313 yards and three touchdowns without an interception in Georgia’s 34-11 win over Michigan to set up an SEC title game rematch with Alabama. Because of his up-start origin and two interceptions, on top of the Bulldogs defense getting taken for a ride for the first time all season, has led to outside doubt in Bennett leading up to the Orange Bowl. Daniels, who only lost his starting job due to injury early in the season, was a desired choice to start for the Bulldogs in the playoff and was ready to go in case of Bennett struggling.

“I didn’t go out there and play well today in spite of people,” Bennett said. “I came out there and played well and worked hard throughout the few weeks we had off because my teammates needed me to do that, and we needed that to win.”

As disheartening and as boring as it sounds, football teams and players sees everyone without jersey as the enemy to some degree and everything said and posted is considered as the cancerous “noise” that must be blocked out in order to ensure victory. Blocking out the noise is celebrated after a victory, while being “disrespected” is worn as a badge of honor.

“I think it’s amazing to have a guy his age block out all the noise and just focus harder,” Georgia head coach Kirby Smart said. “It’s almost like every time he hears noise he just focuses harder on the game plan and what he has to do to execute. You look at some plays he made out there with his feet, they couldn’t account for his mobility and some of the plays he made with his feet, and just really proud of the way he prepped for this game.”

If Bennett declares for the NFL Draft and becomes a part of the process, he may be seen as the next Andrew Luck just based on looks and the fact that he no longer uses a smart phone. He has a Twitter and Instagram account. He is one of the founders of the DGD Fund to give back to the communities through a variety of causes, his being the Boys and Girls Clubs of America. Unless it involves NIL, he doesn’t post anything, which is probably going to be the trend of high profile football players.

“Stetson as a leader on our offense, he doesn’t let that negativity go to his head, for real,” Georgia running back James Cook said on Bennett. “Like he said, he ain’t got no social media, he carry a flip phone around, and he stay off social media, and he just let the noise go over his head and play football. That’s what I love about him.”

Completing deep passes and blocking out the noise are seen as pro qualities that could make Bennett the Mac Jones of this year’s NFL Draft.

Especially if he can redeem his only loss and defeat Alabama on Monday.