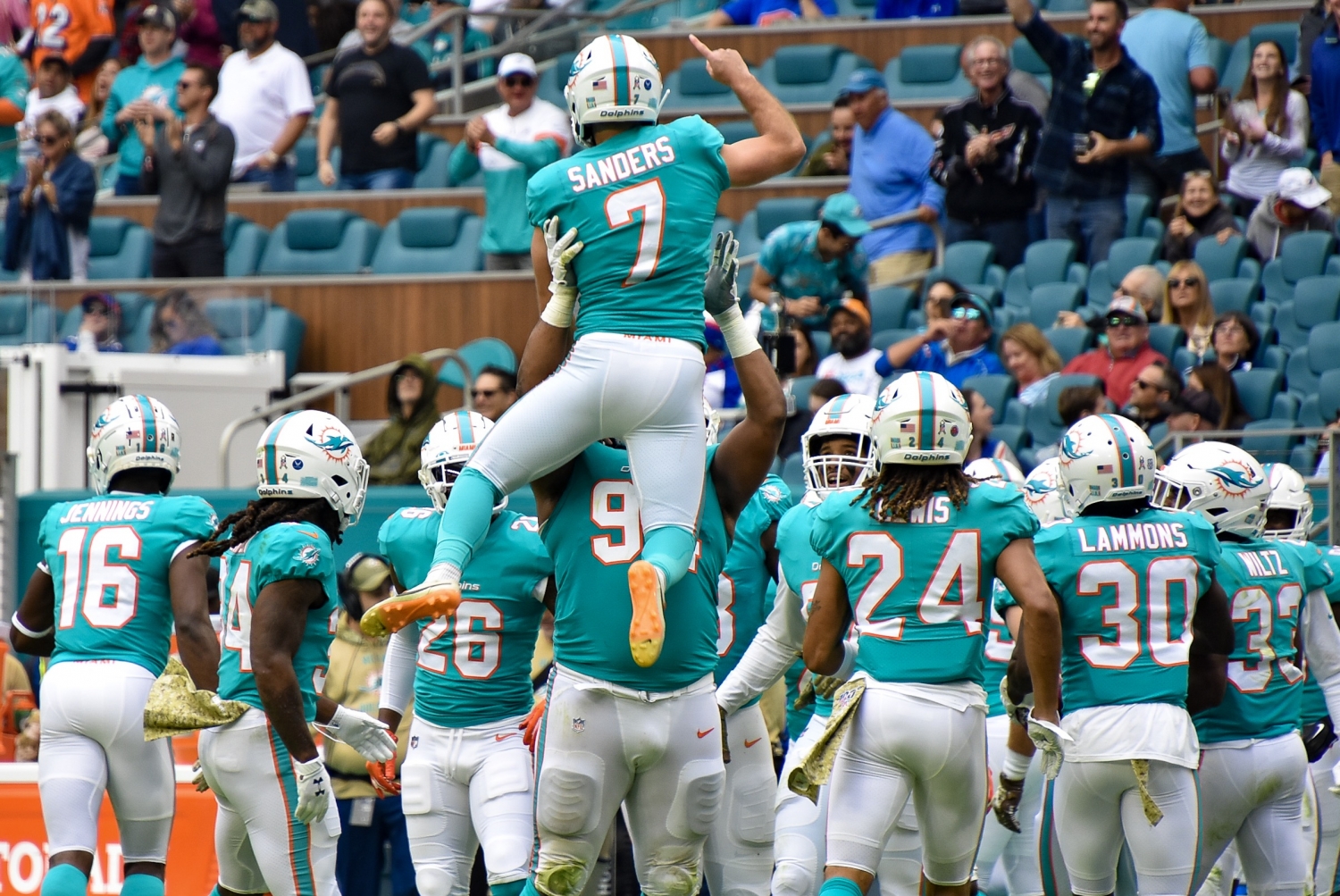 The Miami Dolphins have a long history of finding great kickers. Think back to the days of Uwe von Schamann, Garo Yepremian, Pete Stoyanovich, Olindo Mare. All of these kickers made a name for themselves wearing a Miami uniform. Mare is arguably the most notable of the bunch. However, the team now has a young kicker making the case he can be the greatest Dolphins kicker ever. Jason Sanders, 7th round pick out of New Mexico. The best going away present former special teams coordinator Darren Rizzi could have given his old team.

But what makes Jason Sanders such a special kicker? How, after a mere two and a half seasons, is Sanders already in the conversation for best Dolphins kicker of all time?

“The biggest thing that differentiates Jason (Sanders) from any other kicker I’ve ever trained is his unique mental makeup.” said Brent Grablachoff, Sanders’ private kicking coach. “He’s the most even-keeled, neutral emotion kicker I’ve ever coached, which besides his polished fundamentals and form is what makes him so successful in his craft. He approaches every kick the same, and negative thoughts and feelings don’t get a chance to clutter his mind.

“Even the most mentally apt kicker, I feel, if things are happening around them … it’s going to affect them, at least a little. Every kick is a new kick, and the previous kick is in the past, and no longer a concern. That’s the mentality you have to have to be a successful kicker; and Jason owns that mentality.”

Appreciate @kickingworld for the fine tuning! Been there since the beginning dating all the way back to high school days.

Since founding his kicking camp – Kicking World – back in 2008, Grablachoff has worked with aspiring football kickers and punters ranging from nine years old all the way to pro level ages, and travels the country training over a thousand students a year in over 30 states. In Sanders’ case, Grablachoff has been working with him since his high school days.

Even today, Grablachoff still works with Sanders in the offseason. Sanders breaking franchise records and getting honors like AFC Special Teams Player of the Month makes no difference. However, it isn’t just Grablachoff who took notice of Sanders’ ability to stay focused. Back in 2018, Darren Rizzi cited that as one of the biggest reasons he was drafted.

“You have to have a really, really level-headed demeanor.” Rizzi said. “You can’t really be a roller coaster guy in terms of personality. I really think Jason Sanders was a really good fit from that standpoint. I’m not talking anything about his talent or his kicking ability; but I really think he’s got a really good approach of the game. I think he’s really mature above his years. I think a lot of that factors into it. That’s why certainly he takes the field with confidence every time whether it’s practice or out here during training camp, OTAs or on Sunday.”

Then of course there’s head coach Brian Flores, who also has an appreciation for the art of kicking.

“I started in the kicking game.” Flores said on October 15. “That’s where I got my break in coaching. I know and understand how important those guys in those positions are, whether it’s kicker, punter, long snapper, returners, ball security and things of that nature … Jason has done a great job. I think it’s important to him that he continues to improve and get better and continue with his consistency. That’s been good thus far and we need to just keep going in this direction. Yes, I’m very pleased at where he is, and the job he’s done really on field goals but also kickoffs. He’s done a good job from that standpoint. Just every day, just his attitude and work ethic on a day-to-day basis, he’s really done a good job really since I’ve been here.”

With this in mind, one has to wonder why Sanders struggled somewhat in college. Obviously, Rizzi saw something in Jason Sanders no one else did. Why else would the Miami Dolphins spend a draft pick on him? Still, how does someone go from a 71.4 percent field goal percentage in college to one of the most accurate kickers in the NFL?

“The thing that coach Rizzi knew and that I knew and that was also understood by another sharp AFC Special Teams coach I spoke with during evaluations, was a lot of times the misses were operational misses.” Grablachoff said. “If you watch video, the careful eye could decipher that on many of the misses Jason was getting the laces. The laces of the football were either aimed at him or aimed to the side, or the ball wasn’t optimally set up. It doesn’t necessarily mentally screw up the kicker, but physics prevail. If the ball is tilted sub-optimally or the laces are aiming left or right of target, or toward where your foot strikes the ball, it’s going to negatively affect the ball flight, trajectory, and distance of the kick.”

The physics of how field goals work is something that rarely ever comes to the minds of fans. However, bringing it up may actually answer a question that many fans are still wholly confused about. In the 6th round of the 2020 NFL draft, the Dolphins selected long snapper Blake Ferguson. That was with several skill players still available that could make a potentially immediate impact. The decision had many analysts scratching their heads, wondering why Miami would use a 6th round pick on a long snapper of all things.

“Once Jason got the opportunity to crack into the league, among the top 32 kickers and punters in the league he was rewarded with nearly perfect snaps and holds every time” Grablachoff said. “Matt Haack has done a phenomenal job, and I know that has made a huge difference in the field goal percentage rate. After evaluating game film and talking with Jason, the new long snapper has done a heck of a job this year too. That’s further helped the optimization of the snap, hold and kick operation which has equated to impressive kicking statistics this season thus far.” 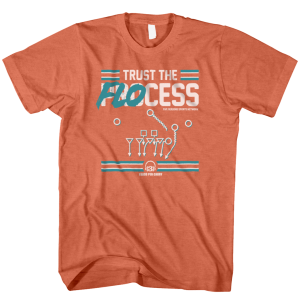 It’s very possible that Brian Flores also knew how important the long snapper is to the kicking game. Hence the 6th round investment in rookie long snapper Blake Ferguson. All of this is information that never gets talked about. Kicking is all but an afterthought in the NFL, and there’s more to it than anyone realizes. There’s also much more work that goes into being an elite kicker than anyone knows.

“One thing that maybe outsiders may not know is with a kicker, you don’t just kick 100-plus kicks a day and leave.” Grablachoff said. “Most of the training session is focused on drills. A lot of these kicking drills are stationary where we focus on making good foot to ball contact. It’s very similar to a golfer, where the club face needs to strike the ball at the correct angle. It’s similar as a placekicker. But the correct spot of the foot needs to make contact on the correct spot of the ball, and at just the right angle.

“More than half of Jason’s kicking practices are focused on drills & tactical planning than it is monotonously kicking balls. As Jason’s brothers are both involved in the military, as were both of my uncles and grandfather, I’ll give you an analogy to war. The kicker is the sniper and has to make each shot count … a one shot, one kill philosophy if you will.”

It’s clear that Jason Sanders takes what he does very seriously. But that doesn’t mean he’s all work and no play. All the proof anyone needs of this is the remarkable fake field goal last season where Sanders caught a touchdown pass from punter Matt Haack. Sanders has a very neutral mindset when kicking. But the utter joy on his face when he caught that touchdown shows that Sanders loves what he does with a passion.

“It was pretty wild,” Grablachoff said about the play. “He was getting inundated with interviews that day, so much that the son of a gun didn’t have time to get back with me after. I was mad at him, jokingly, because I wanted to do a live interview on our Instagram page that night. But he said his voice was hoarse from all the reporters’ questions. So, I didn’t get to talk to him until the next day about the play. It was pretty funny and unexpected to see live.

“And of course, I pick up my phone ten minutes later and have dozens of DMs, shares, and tweets to attend to … it went viral immediately and it was pretty neat to see the exposure for the Fins’ lonesome kicker/punter duo. Then seeing Jason and Matt (Haack) earn the NFL Play of the Year at the end of year award ceremony was pretty awesome.”

While it may not be news to hear that a player is hard-working, getting a behind-the-scenes look at what that means is very interesting. Jason Sanders shows poise with his kicks that hasn’t been seen in a very long time. Not since Olindo Mare.

Will Sanders eventually miss? Probably. But with the kicking team Miami has put together, it may be quite a while before that happens. There’s always that possibility that Sanders will put together a perfect season. But, Sanders’ mental makeup is still intact, and he refuses to get ahead of himself and lose that focus.

“That’s the goal, right? You want to walk out being 100 percent.” Sanders said in mid-October. “For me, when the season is over, it’s a good time to reflect on what you did during the season … It’s a long season. That’s kind of why I want to stay on the same line right now just going forward.”

If Sanders is successful in his goal, then in time, he may just break more records. And perhaps, prove himself the best kicker the Miami Dolphins have ever had.

Season Ticket: It was a Start, and for Tua, Surging Dolphins, it’s Su...
Scroll to top