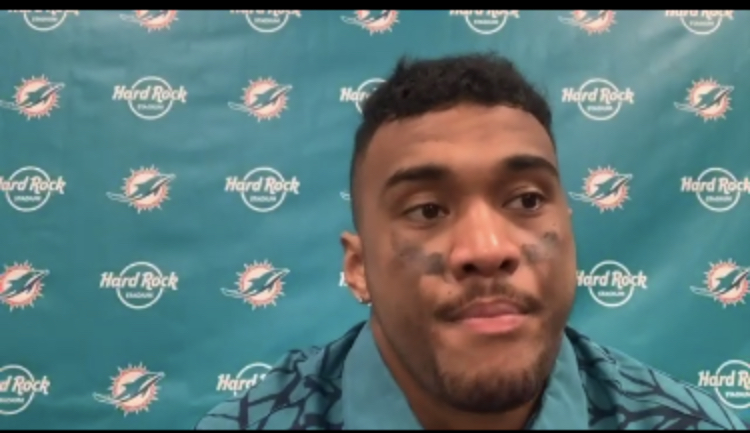 MIAMI GARDENS — What this could have been.

That was the thought on the approach to Hard Rock, where nary a brake was necessary on the Turnpike ride, off the ramp, into the finally-promising future of what was once the signature franchise in South Florida. What this could have been, if not for the global pandemic that has stopped so many lives in their tracks, waiting for some better day. What could have been, if the buzz in this town for a new Dolphins beginning, in living rooms across four counties, could be sanitarily matched in sports bars and the stadium, so more than 13,000 or so could be on hand for local football history, the official unveiling of the most important player of this franchise’s past two decades?

What this could have been.

But in a year of “if onlys,” we’ll take what we can, and so, in so many ways, the Tua Tagovailoa starting debut, in the seventh game of this weird but increasingly interesting 2020 Miami Dolphins season, was about as much as we could reasonably expect. His performance wasn’t spectacular in any sense, certainly not to his standards with all of 93 yards in Chan Gailey’s Bubble-wrapped gameplan, as he acknowledged afterwards. But we’ll take it, won’t we? Take the 28-17 win? Take the 4-3 record in an open AFC East, with the Bills scuffling and the Patriots sinking and the Jets Gase-ing? Take the hope? Take the small pleasures, in seeing his read a defense properly, in seeing him stand up after his first hit (“I did enjoy getting hit that first time; that was definitely a welcome”), in seeing him walking off a winner at the end, his mother’s eyes wet in a skybox?

This is not a one-game process.

Nothing is definitive after today, or next week.

Just ask RGIII and countless others.

You just want to see some competence and command.

I think you will.

“I don’t think I played to the standard of what this offense was capable of,” Tagovailoa said, after completing 12 of just 22 passes, with Miami accruing just eight first downs compared to 31 for Los Angeles.

Maybe it was somewhat on him. But the drops held him back, four in all, of he would have thrown for closer to 130 or 140 yards than his sub-100 total. So, seemingly, did Gailey. The extreme conservativism in the play-calling made it seem at times as if Tua had been elevated prior to Gailey rendering him ready, though the sizable lead likely contributed to some of the caution. Why push it if you didn’t need to, especially with the receivers struggling so much? As long as the Dolphins had enough upright defenders  — and that was an open question with the 93 snaps they were forced to play — Miami might have enough to survive the day, even against a team that entered 5-2.

“We played a lot of defense today,” Flores said. “Guys were a little bit gassed at the end. I can talk about conditioning now.”

He could say that with a smile, because he knows what he has here. The defense, which appeared leaky at the start of the season, with free agents struggling to acclimate, suddenly looks lethal, confounding the flustered Jared Goff with more unique, twisted looks than Khloe Kardashian’s had.

Miami has allowed fewer points than any other NFL team, and GM Chris Grier is on an even better run.

The biggest plays of the game were made by players he’s trusted, from 2019 fifth-round linebacker Andrew Van Ginkel, running with a fumble like his Viking hair was on fire, to 2019 first-round defensive tackle Christian Wilkins showing better hands than anyone on offense, to free agent picks Emmanuel Ogbah, Shaq Lawson and Kyle Van Noy all taking part in enormous plays. The Dolphins’ defense is now on offense for the first time since Jason Taylor by far was the best 99 in football, not the guy (Aaron Donald) who is now, and stripped Tagovailoa on his very first series.

What did Flores say to Tua after the fumble?

It could have gotten worse from there, and Tagovailoa’s second possession wasn’t much more productive, when after a quick slant completion to Preston Williams there was miscommunication on a stop route by DeVante Parker. The receivers couldn’t consistently get separation and, when they did, Williams in particular couldn’t catch. But again, the defense was doing enough, and when Jakeem Grant exploded for a punt return touchdown, the team-record fifth return touchdown of his short career, the Dolphins could reel it in even more offensively.

Along the way, Tagovailoa made some zippy timing throws, one to Duncan Smythe and another to Grant, but the timing that mattered most was the clock ticking down. Escaping. Getting to the next game, against surging Arizona and their own smallish franchise quarterback Kyler Murray, in one piece.

A day for the defense.

Tagovailoa called his first starting experience “fun,” and said he planned to keep the ball from his first touchdown, a 3-yard dart to Parker, who made the best receiving adjustment of the afternoon. But this is a guy who would throw for more yards on the first two Alabama drives than he did all of this Sunday, so he won’t kid himself. He needs to recognize pressure from the middle faster, and to prepare for even more than the coaches outline in practice, after saying that the Rams threw some unexpected alignments at him.

“I’ve heard it many times from the guys in the locker room, it’s good that we still came out with the win,” Tagovailoa said. “Aside from that, thank God we got a good defense.”

He told the defense the fumble was his fault, an extension of the leadership he showed from the start, as when he was grabbing teammates by the shoulders as they finished warmups and headed toward the tunnel. He has charisma and toughness. That’s a start. That will get respect, as it got Ryan Fitzpatrick’s, even as hurt as Fitzpatrick was by the quarterback switch, the announcement of which was the rare thing the organization has bungled of late, with the leak of that made well over Brian Flores’ head, with someone high up telling the wrong friend who told ESPN’s Adam Schefter.

Flores has earned trust with everything he’s done thus far in his Dolphins tenure, which now includes a 9-7 record over his past 16 games, and improvement in several areas every week. He has earned the right to raise Tagovailoa as he sees fit, and in that sense, this was an auspicious start.

Through the first six games of 2020, Wilson has averaged 315 yards.

Even for the best, it doesn’t happen overnight.

“What was the plan?” Flores said. “You can go through a lot of different scenarios… But the plan was to play good, efficient football. There’s some things we need to correct but it’s good to make those corrections after a victory.”

Corrections will be made.

Obstacles will be still be encountered.

But you could feel the start of something here Sunday, something that could last decades rather than years, something this place has needed as a worthy complement to the more successful Heat. There is hope here, one of the few places it seems to still exist. There was a kid wearing No. 1 who has a chance to be that guy in this town, and that one touchdown, even if only three yards, and one of only 12 completions, will likely long be remembered by those who bore witness.

You only wish there could have been more of them.

Ethan J. Skolnick (@EthanJSkolnick) has covered South Florida sports since 1996 and is now the CEO of Five Reasons Sports Network.