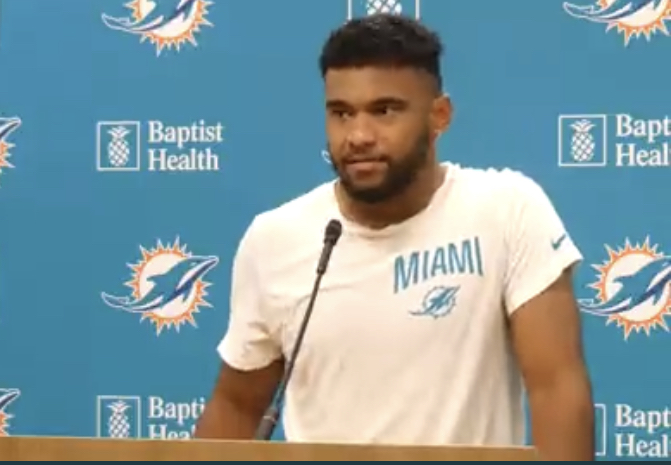 The most bewildering thing about the Miami Dolphins five game winning streak is the fact that they have been able to hold their leads in the 4th quarter and win games.

Stop me, but have we ever heard a Dolphins team holding a lead in the 4th quarter and winning?

I think it might be the start of a discussion about how they are doing it.

Specifically, how they are led by Tua Tagovailoa, especially in close games.

Let’s go back to the 4th quarter against New England. QB Mac Jones is trying to execute a comeback as the Dolphins lead 17-16. Damien Harris fumbles the ball and it is recovered by Xavien Howard.

With 3:24 left in the game the Patriots had all three timeouts and the two-minute warning while the Dolphins were backed up at their own 9 yard line.

XAVIEN HOWARD COMES UP WITH THE FUMBLE!!! WHAT A PLAY!! pic.twitter.com/ov9HlOAnvV

1st and 10 at the 9 yard line, Tua Tagovailoa fakes a handoff and runs to the left end of the field for eight yards, staying in bounds to keep the clock running. Suddenly, a yellow flag is thrown onto the field. PENALTY on MIA-L.Eichenberg, Offensive Holding, 4 yards, enforced at MIA 9. Yep, its the same old Dolphins, the perfect receipt to punt toward mid-field and the Patriots would nail a game-winning field goal.

However, the Dolphins call an RPO look on 1st and 14 that New England had already seen. Except, Tua Tagovailoa opted to disregard the RPO mesh and thread a back side slant to Devante Parker for 13 yards.

Wow this was like a fake RPO. George Godsey pulled this one out of the play sheet at a pretty damn important time. 1st & 14 from your own goal line trying to run 3:24 off the clock to win? Whew. pic.twitter.com/3OyQQJDH2W

2nd and 1, Wildcat formation,  Direct snap to Malcolm Brown who runs up the middle to gain a new set of downs. The Dolphins kept running the ball and the Patriots kept calling timeouts, yet the Patriots defense could not stop the Dolphins.

That 4th quarter drive was as effective as any scoring drive Miami could’ve mounted in the 4th quarter. Running the ball effectively when your opponent knows you want to run it, backing yourself off your own end zone with the pass, ending the game in victory formation.

The Dolphins entered the 4th quarter against the Jaguars down 17-13. With 14:15 left on the clock Tua, in his first game back from rib injury, and the offense drove 91 yards down the field spanning almost 4 minutes of offense.

The Jaguars tied at the 3:40 mark in the 4th quarter. The last 4th quarter drive ends with a turnover on downs, where Tua Tagovailoa moves the chains passing to Jaylen Waddle and Mike Gesicki; however the run game could not complement the passing game. Malcolm Brown comes up inches short at midfield.

Love the accountability from Liam; however, Durham Smythe's blocking has been suspect this season

A QB option where Tua could have ran it in would have worked https://t.co/A8xyVnRqMf pic.twitter.com/XMDHz6PGuQ

The Jaguars win the game on a last minute field goal 23-20.

Entering the 4th quarter, the Dolphins are down 27-14 and receive the ball at their own four yard line due to a muffed catch by Myles Gaskin.

The defense recovered a fumble from Matt Ryan to create an opportunity for the offense to score again. This time they scored a touchdown on a 9 play drive that lasted almost four minutes.

Tua Tagovailoa led the comeback as the Dolphins were up 28-27. The rest was on the defense to close the game with 2:27 left in the 4th and Matt Ryan on his own 25. The defense failed as Miami lost 30-28.

Miami entered 4th quarter up 6-3 on Baltimore and got a big boost from Xavien Howards fumble return touchdown to go up 15-3. Two drives later Lamar Jackson and the Ravens go on a nine play 99-yard touchdown drive to close the gap 15-10.

With 4 minutes left in the game delivers a deep left pass to Albert Wilson for 64 yards, moving the Dolphins offense up the field and in position to score. The offense runs the ball to run the clock and score. Miami leads 22-10 with 2:19 remaining in the 4th quarter.

This time, the Dolphins defense closes out and seals the game by intercepting Lamar Jackson.

Miami entered 4th quarter tied 14-14 against the New York  Jets. They hit on a 75-yard TD drive to go up 21-14. Then, with 9 minutes left, trying to protect a one score lead, execute a 7-minute scoring drive that left in the dust.

It’s true that Miami entered the 4th quarter against the Carolina Panthers up 27-10 with the game already won. -However, consider the fact that the football was possessed for 10.5 of the 15 minutes of the fourth quarter. Carolina had no chance to even try a comeback.

The Dolphins were only up 10-6 on the Giants heading into the 4th. Miami goes on a 61-yard touchdown drive, another FG drive, again possessing the ball 10 of 15 minutes, making a Giants comeback impossible.

Through Week 13, Tua is in the top half of the league in several key performance and efficiency metrics. He’s ranked 7th in ESPN’s Total Quarterback Rating — ahead of Patrick Mahomes, Josh Allen, and Dak Prescott.

No one else in the NFL even has 2 straight.

He’s 2nd in completion rate, 7th in rate of off-target throws and 13th in expected points added per dropback as of Week 11.

Since 1994,Pro Football Reference tracks splits-by-quarter. With a minimum of 250 pass attempts, Tagovailoa’s 109.2 passer rating in the 4th quarter is second-best ever. He’s currently the top rated 4th quarter passer.

Among all NFL passers going back to 1994, Dolphins QB Tua Tagovailoa currently ranks:

There was a data compilation error on the 4Q 1st Down % (run & pass) statistic.

Tua actually ranks #1 among all QBs from 1994 onward, in that category.

Tua Tagovailoa has a 59% successful play rate in the 4th quarter.

Pretty good for #2 in the NFL.

Many will call it the clutch gene turning on, at the end of the day it all comes down to execution.

“It’s about putting the game away, sometimes it’s controlling the ball and making sure that those possessions are going to your best players … Third downs are critical. We’ve been fortunate to convert some big third downs and churn some clock.”

At the end of the day, Tua Tagovailoa is doing well in the 4th quarter. He’s making good decisions and playing his best, where it’s needed.

So it’s not just about Tua’s personal 4th quarter accolades or statistics — his 4th quarter success coincides with team success.

Fresh Perspective: Give Dolphins GM Chris Grier credit where due