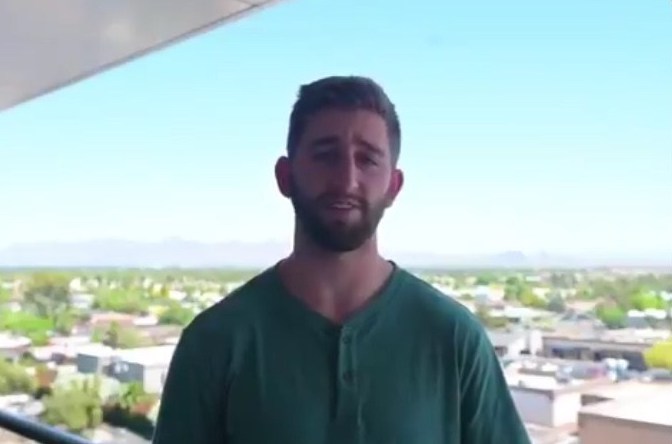 Over the weekend, the Miami Dolphins made a draft day trade that had DolphinsTwitter losing their collective shit for three-straight days and nights.  The Fins sent a second round pick to the Arizona Cardinals for quarterback Josh Rosen — who was picked 10th overall by the team (who was run by an entirely different front office then) in last year’s draft. So, was it a good trade? Was it a bad trade? Have you ever asked a girl on a date?

People — and by people, we mean FOOTBALLLLLLL People — have questioned whether or not The Hebrew Hammer has the right character to be a franchise quarterback that can lead a FOOTBAAAAAALLLL team. Does he have the DESIRE? Does he EAT, DRINK, SMELL, SHIT, FUCK Football 24/7? Is he a leader of MEN? And, most, importantly, does he love the TROOOOPS?

This kind of shitbaggery analysis from the NFL Network Meatheads of the world has dogged Rosen ever since his days at UCLA because he had the AUDACITY to have a hot tub in his dorm room. COLLEGE IS FOR BOOK LEARNING AND STUDYING GAME FILM ONLY, JOSHUA. But it all came to a head over Draft weekend when the Miami Herald’s own Harbinger of Dog Whistle Hot Takes & Lover of All Things Sarah Palin, Armando Salguero, put out a tweet where he said multiple sources of his told him that Rosen the person was a concern more than Rosen the quarterback.

The immediate response here is to assume that ArMAGA went and made up these so-called sources to try and paint Rosen as a troubled guy, mainly because Rosen once wore a Fuck Trump hat on one of Donald Trump’s golf courses in California. And given Salguero’s well-documented outspoken nature over how much he hates it when players kneel to protest the unjustified murder and violence white cops have perpetrated against black men over the years, and his undaunted love for Sarah Palin, one could be right in assuming he made his sources up and just had a tight asshole about the idea of having  to cover a Trump hatin’ quarterback for a living.

There’s no way to prove any of this. So we won’t speculate or accuse. But, we will rub our chin and squint our eyes and say things like, “Hmmm seems mighty fishy that a MAGA-loving toadface like Salguero would blurt shit out about Rosen’s character for no reason whatsoever except maybe because Rosen hates Trump just as the Dolphins were on the brink of trading for him.”

So does Rosen have a questionable character? Could Arrrrrrrmando be onto something here? TO THE NEWS ARCHIVES, ROBIN!

Here’s what’s been reported about Rosen’s so-called “troubled character” over the years. And please keep in mind that most people who work in, cover, and write about football for a living are Neanderthaloid meatheaded shitsacks of the highest order:

Exhibit A: HE ONCE WORE A FUCK TRUMP HAT 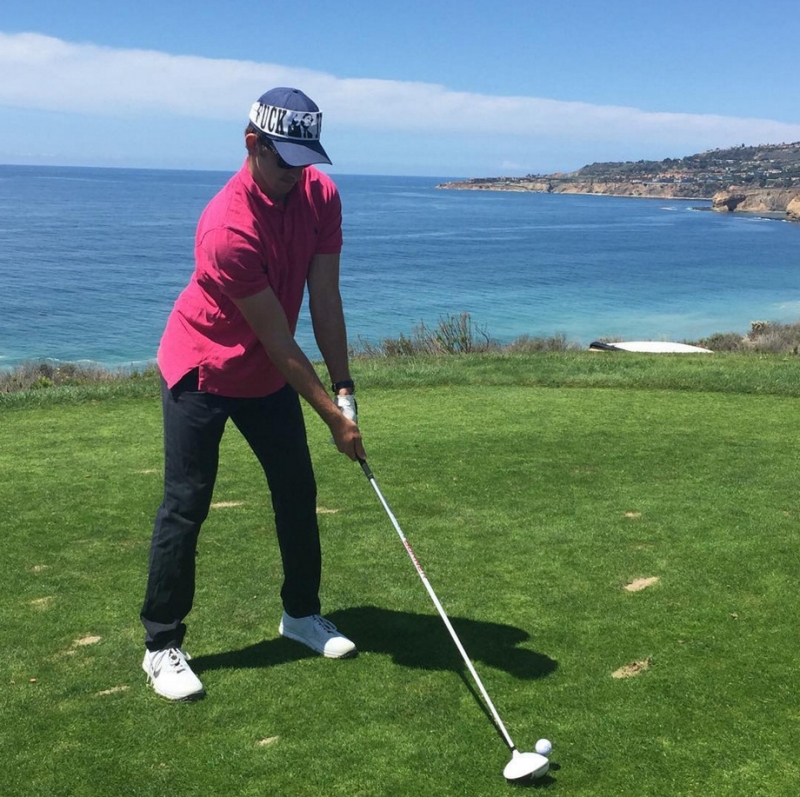 Back in April of 2016, Rosen posted a photo of himself on Instagram on a Trump golf course wearing a homemade hat that read Fuck Trump. He eventually ended up deleting the photo, but only because he was scared the word “Fuck” might send the wrong message to kids that looked up to him (not so much because he hates Donald Trump). But the photo had entered the media’s bloodstream by that point and it became a thing. So much so that his then-UCLA coach Jim Mora Jr. compared Rosen wearing a Fuck Trump hat to the kinds shenanigans Johnny Manziel ended up doing, because making a political statement and getting shit-faced every other night are the same thing. “Who do you want to be?” Mora asked Rosen at the time. “Do you want to be Johnny Manziel or do you want to be Tom Brady?”

Mora also added: “So, if you’re going to go out on Donald Trump’s golf course and wear a hat that says ‘F– Trump,’ […] you’re heading towards Johnny Manziel.’ So, let’s head toward Peyton Manning. Let’s head towards Tom Brady.”

Exhibit B: HE HAD A HOT TUB IN HIS DORM 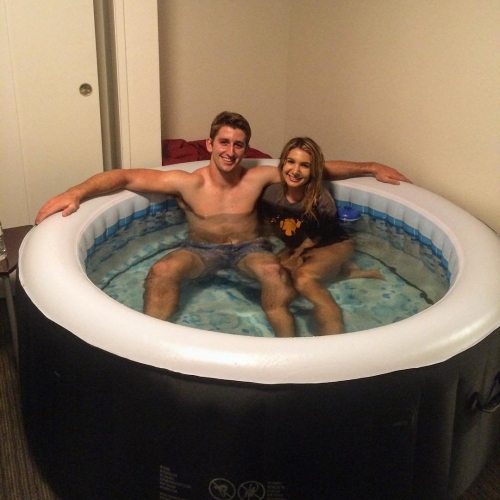 Yes. He had a hot tub in his UCLA dorm room and took a photo with a girl sitting in the hot tub with him. So the Miami Dolphins quarterback is Otter from Animal House rather than fucking Neidermeyer or Marmalard.

Remember when Dan Marino allegedly did all of the cocaine at Pitt? And entered the draft with a reputation of loving to party like they do during the “Push It To The Limit” Scarface montage?

This just in: COLLEGE ATHLETES HAVE WAY MORE SEX THAN YOU WILL EVER HAVE IN YOUR LIFETIME. SO MUCH SEX. SHITLOADS OF SEX. BUCKETS OF SEX. SEX-BUCKETS! YOU CAN’T EVEN IMAGINE ALL OF THE SEX THESE GUYS ARE HAVING RIGHT NOW. LITERALLY, RIGHT NOW AS YOU’RE READING THIS.

Sorry to have to break it to you, but there it is.

Exhibit C: HE THINKS COLLEGE PLAYERS SHOULD GET PAID

In May 2016, Rosen put up an Instagram post in reaction to the what was, at the time, the biggest shoe and apparel deal ever signed by the NCAA. The deal was worth $280 million, and Rosen posted the news with this comment: “We’re still amateurs though… Gotta love nonprofits #NCAA”

Here, and in a separate interview, Rosen was making a point about how student athletes are asked to stretch their lives to the brink of insanity, balancing class and sports and life, all while the powers-that-be at the top of the NCAA are diving into piles of money like Scrooge McDuck. Wherever you stand on this issue, Rosen has his opinions, and is outspoken about it. LET US NAIL HIM TO A TREE AND THROW PRODUCE AND HUMAN FECES AT HIM.

Look at that cocky boy cocky shit so cocky.

Fuck that. I don’t want a quarterback with a chip on their shoulder over being snubbed by teams that passed him up. That’s just douchey. And, if history has proven ANYTHING, it’s that douchey quarterbacks with chips on their shoulders don’t win DIDDLYSHIT.

Also, the Patriots looked into trading for Rosen this weekend. That team does NOT like douchey players. Google it!

Exhibit E: HE UNFOLLOWED THE CARDINALS ON SOCIAL MEDIA

With all the news swirling about how the Cardinals were about to draft Kyler Murray and throw Rosen into the proverbial trash bin like old lumps of cat shit, Rosen acted cool and classy and said all the right things. Then when they actually drafted Murray, Rosen went ahead and unfollowed the team on social media.

This sent Steve Smith into a large hissy about Rosen’s manhood or some such shit.

HOW DARE HE UNFOLLOW THE TEAM WHERE LITERALLY EVERY PHOTO THEY POSTED WAS ABOUT THE GUY WHO REPLACED HIM.

I dunno about you guys, but if you unfollow a girl after she dumps you and then plasters her IG with photos of her new guy, YOU HAVE LOST YOUR TESTICLES. WHERE ARE THEY? THEY HAVE BEEN DELETED.

Call us crazy but, based on all evidence above, Josh Rosen is just a human who lives the life of a human. OMG HE IS JUST LIKE US.

He has and likes to express political views. And he likes to have sex, probably in a hot tub.

While both of those things are usually okay for everyday people, it’s evidently VERBOTEN for professional football players who should only live to play football and win games on Sundays, because hands in the dirt, cupcake!

YOU CAN ONLY BE A PLAYER OF FOOTBALL. NOTHING ELSE.

Oh and here’s FOOTBALL GUY WHO IS GOOD AT FOOTBALL, JJ Watt, calling bullshit on that sentiment:

This is just as dumb as the “shut up and dribble” comment. Right or wrong, athletes are some of the most recognizable people in this country. That is an extremely powerful platform that so many use to do great things in their community. Who wouldn’t want that? #MoreThanAnAthlete https://t.co/wDKcj341n8

OH BUT JJ WATT NEVER PLAYED WITH ROSEN WHAT DOES HE KNOW?

Ok, let’s see what his teammates have said:

“I don’t know where it comes from. It drives me insane.”

And then there’s this, where America’s Greatest Ass says of Rosen:

“He’s a delightful person to be around. Anybody that spends any time with him, he’s got a vast array of interests, and he’s a very, very interesting person. I’ve enjoyed my time getting to know him.”

The Verdict: JOSH ROSEN IS A PERFECTLY FINE PERSON SO SHUT YOUR GD FACEHOLE ABOUT IT ALREADY

Sifting through the evidence, it’s pretty clear that the only real crime Josh Rosen has committed is that he likes to live life like everyone else. But because football is a Borg-like collective where players are only allowed to live and eat and shit football, talent evaluators (guys who never sleep, have zero humor, and get fired every 3-to-5 years) began to express concerns.

It’s likely that Josh Rosen is disliked by a lot of people because, for the first time in their football lives, a guy doesn’t fit the normal mold of what an NFL quarterback should be. You know, the kind that likes to do things outside of work, like literally every other human on Earth. And their troglodytic brains can’t handle it.

A quarterback who likes girls and hot tubs? UNHEARD OF.

A quarterback who is cocky and arrogant about his skills? WHERE IS MY FAINTING CHAIR?

This isn’t the kind of quarterback NFL teams want. They want the archetype.

They want the kind of quarterback that votes for Donald Trump. The kind that spouts cliches about grit to the media. The kind that allegedly rapes women and gets away with it, while winning Super Bowls.

THOSE ARE THE REAL HEROES.

Anyway, Josh Rosen seems like a decent enough dude. Does he come across as douchey sometimes? Meh, I guess. But what quarterback doesn’t have a modicum of douche? It just comes with the position.

Chris Joseph (@ByChrisJoseph) is a host of Ballscast, and has written for Deadspin, Miami New Times, CBS Sports, and several other outlets.

Why the Marlins have won the J.T. Realmuto trade

Everything That Sucked About Avengers: Endgame (SPOILERS)
Scroll to top