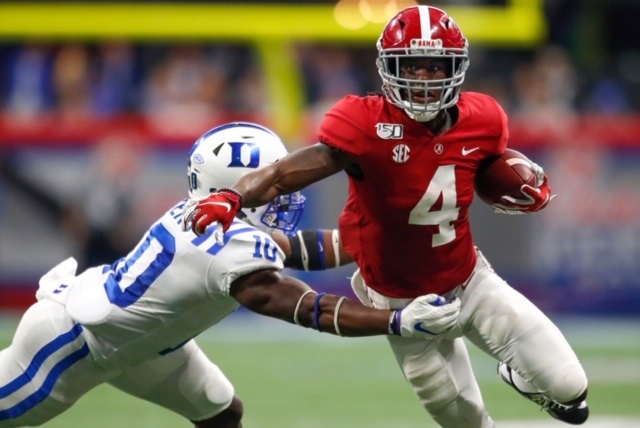 It would be tough to duplicate the 2019 NFL Draft for south Florida – when five players from Miami-Dade and Broward Counties showcased why this area of the country is like no other.

When Nick Bosa (Ohio State-St. Thomas Aquinas) went second to the 49ers, Devin Bush (Michigan-Flanagan) was the 10th selection of the Pittsburgh Steelers, Brian Burns (FSU-Plantation American Heritage) was the 16th pick of the Carolina Panthers, receiver Marquise Brown (Oklahoma-Chaminade-Madonna) went 25th to the Baltimore Ravens and cornerback Deondre Baker (Georgia-Miami Northwestern) was the 30th selection of the Giants, it set a record for anywhere in the nation. One that will be hard to break.

As we were now just days away from the NFL Draft, area prospects are starting to surface, and while the early indication has maybe two players from the #305 and #954 going in the first round, there are several impressive football players that are expected to be drafted – or perhaps considered as coveted free agent signings.

With the next few college classes loaded with south Florida talent, here is a look at some of the players you could see in this year’s draft:

C.J. Henderson, DB (Florida – Christopher Columbus). Leaving a year early, here is one of those impressive football players who will go in the middle of Day 1.

It seems like it was only yesterday when he won the fastest man contest at Coach Al Golden’s University of Miami Camp as a sophomore receiver/defensive back.

Jerry Jeudy, WR (Alabama – Deerfield Beach). Perhaps the first local player who will land in the NFL, joining so many other local players from south Florida, who made an impact at the University of Alabama.

Wasn’t it just yesterday that he was in 8th grade and played a huge role in the 7-on-7 season, quickly turning heads and showing the nation that another star was indeed born.

In addition, there are some other prospects that figure to be in the mix this year as well – with many of them still turning heads at the combine and then during pro workout days at their colleges:

Trajan Bandy, DB (Miami – Christopher Columbus). Leaving school early, this is someone who may land on some roster on Day 3 – or perhaps as a free agent.

Buckshot Calvert, QB – (Liberty University – Carol City). The all-time leading passer in school history may not get drafted, but has the ability to turn heads in camps and stick somewhere.

Nevelle Clarke, CB (UCF – Coral Springs Taravella). Solid football players who has been under the radar since high school. Keep your eye on this amazing talent. He will end up on someone’s roster.

Tyler Huntley, QB (Utah – Hallandale). If anyone knows anything about the game and how to evaluate, this young man ends up on some roster and will make a difference.

Sage Lewis, OLB (FIU – Monsignor Pace). All he’s done over the past three years is make plays – and there is no getting around the fact that he is a draftable prospect.

Josh Metellus, S (Michigan – Flanagan). Talk about someone who has been hidden, go ahead and put his film in and you will see what everyone has been missing.

Zack Moss, RB (Utah – Hallandale). If you are looking for a durable back who could be the best coming out in this draft, here is who you take. Only the all-time leading rusher in the storied history of Utah.

James Pierre, DB (FAU – Deerfield Beach). When he was in high school he was underrated, and as he comes into the draft, he is still a talent that is flying way beneath the radar.

Stanford Samuels III, DB (FSU – Flanagan). From the time anyone can remember, he was making a difference, and while he left early from school, he has a chance to prove a lot of people wrong. Great ball skills.

Demari Simpkins, WR (Utah – Hallandale). One of the many playmakers who has been slept on way too long – and for that reason – if he is given a chance, watch out!

Darnell Solomon, WR (USF – Miami Central). If he can get it all together, this is someone who showed flashes early on at Hollywood Hills, made a major impact at Champagnat Catholic and finished things off at Central. Needs to make football a priority.

Jason Strowbridge, DE (North Carolina – Deerfield Beach). From the time he left high school, this is someone who has been making a major impact at the college level, and no doubt he will be playing this game for a long time.

Josh Uche, LB (Michigan – Christopher Columbus). Smart, productive and a big time player, who has the chance to be very special for a long time in the NFL. Many teams should be on him – fast!

Binjimin Victor, WR (Ohio State – Coconut Creek). May not have been the overall difference maker that many felt he would be, but leave no doubt, the talent is there and he can be very effective at the next level.

There are other prospects from south Florida who also have the chance to turn heads – in the NFL, , CFL or in any of the arena leagues.

Season Ticket: Hey Dolphins… Be the Heat
Scroll to top