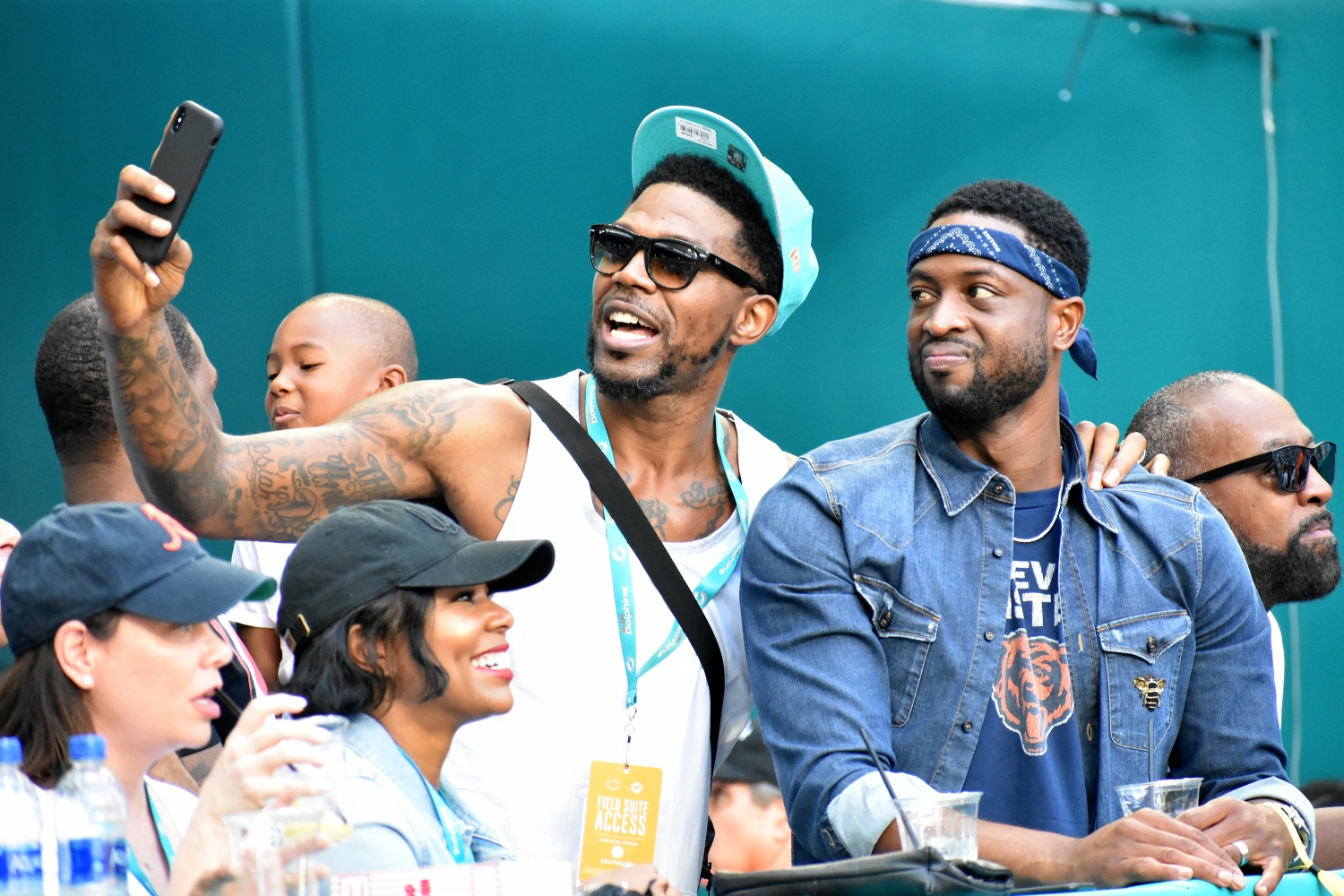 And yet there are only two questions that truly matter, as the Miami Dolphins embark upon the three-day stretch that will likely define the next three years, if not decades. There are only two questions, to which the answers will determine whether the franchise continues to cling to stale memories that pre-date Richard Nixon’s resignation, or will finally rise above its own wreckage to something resembling relevance in a market. Relevance in a market that has mostly abandoned aqua and orange for White Hot and Back in Black. That has stashed No. 13 in its collective closet behind No. 3. That has flocked with greater consistency to a building where the home team actually, more than occasionally, wins — because it has created a culture of continuity, of stability and mostly, of never settling.

Are they different — from the Dolphins we’ve known and grown to loathe? 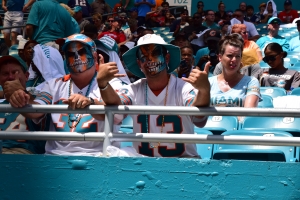 Dolphins fans are hoping Hawaiian born Tua Tagovailoa will be their quarterback next season. (Tony Capobianco for Five Reasons Sports)

They accomplished more in a 5-win season than in all the prior 7-9s combined.

They elevated and further empowered a man (Chris Grier) who was here for all the recent failures, though his role in many remains somewhat unclear. They conceived a plan, unpopular with many — including this writer, at times — to shed salaries and personalities who didn’t fit, either because their position and performance didn’t warrant a looming payday (Kenyan Drake), or didn’t buy into the process (Minkah Fitzpatrick), or simply because another team offered them too much to turn down (Laremy Tunsil), or because they simply weren’t at an age to offer what they had prior (Reshad Jones, Kiko Alonso). They stubbornly started a quarterback (Ryan Fitzpatrick) ahead of a guy they spent a second-round pick (Josh Rosen) to acquire, even though they were criticized on both sides — by those who believed Fitzpatrick was worse in preseason (he was) and those who believed he was better and would cost draft slots (he did). They trusted a coach (Brian Flores) with no managerial experience, one who seemed to make missteps in his first preseason (Kenny Stills, Jay-Z playlist), and whose Takes No Talent approach could have struck his players as a wee bit offensive. 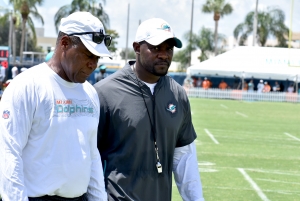 Just about all of it.

They started as one of the most embarrassing entries in NFL history, and somehow earned wins while shedding supposedly irreplaceable talent. They won 5 of their final 9, including handling a motivated Patriots squad in the season finale, while only dropping four draft spots from the best case scenario. They created a semblance of a, dare we say, culture that attracted a bevy of useful free agents, including an elite cornerback (Byron Jones), a linebacking leader (Kyle Van Noy) and a pass-rusher (Shaq Lawson) at market or below-market prices, the truest sign that players want to play for a coach and an organization — which, again, is something we typically say about the Miami Heat, not their struggling northern neighbors. And they stacked more chips to fill the cupboard and all the storage bins too — 14 picks, 5 in the first three rounds, plus enough additional selections the next two springs to allow for more than a couple mulligans.

So they answered the first question affirmatively.

They are different — or so it appears.

Now here’s the second question, as it applies to the organization with which they sort of share the South Florida stage:

Can they be something closer to the same?

“This is a championship organization.”

So how did it get that way?

Because that’s what it believes it is.

Because that’s what it knows matters.

Because Pat Riley made it that way. 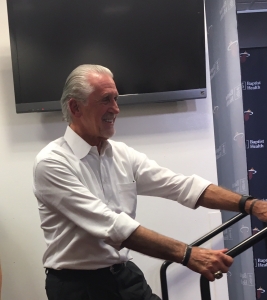 It wasn’t enough to inherit Glen Rice, already emerging as one of the sport’s elite shooters. Not when Alonzo Mourning, a sneering, shot-blocking centerpiece was sick of Charlotte. It wasn’t sufficient to supplement young exciting wings Lamar Odom and Caron Butler after they teamed with rookie Dwyane Wade for a surprising, exhilarating 2003-04 season. Not when a motivated Shaquille O’Neal could storm into town with his 18-wheeler, water gun and paint-filling presence. It wasn’t OK to hold on to Josh Richardson, a franchise find who became more than anyone anticipated, when Jimmy Butler declared his desire to follow Wade.

The Dolphins have, for what seems centuries, tried to find their Riley, the guy with the balls and the brains to set the agenda and tempo, to take the risks and the heat, to create a culture of accountability and consistency and mostly, certainty, that could survive more than a second or third season. Two owners, the late H. Wayne Huizenga and the snakebit Steve Ross, hired what many believed were the best and the brightest in the shadow of the Dolphins’ Riley, that icon Don Shula, whose legacy becomes greater with every laughable, aborted rebuild.

Jimmy Johnson, the man who shoved Shula aside, may have actually worked. He had the brains, balls , a little orange box… and a proven plan. But he left his heart in Texas, at his mother’s funeral and — after losing the public relations battle with Dan Marino — seemed to lose his spirit too. He brilliantly established the foundation, stacking up picks and mining later-round finds such as Jason Taylor and Zach Thomas, but, after years of taking shots on troubled talents time after, acted out of timidity. He avoided the otherworldly Randy Moss. Johnson went to the Keys. Moss went to the Hall of Fame. 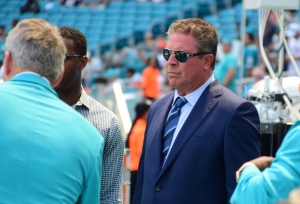 Then, after the Dolphins declined over time during the better-to-punt Dave Wannstedt era, even with onerisky play (the Ricky Williams trade) briefly, brilliantly paying off, they turned to the most coveted college coach in the land, to run everything. Problem was, Nick Saban was used to running college locker rooms, and college media contingents, and college recruiting rules, and not when something or the system pushed back, so he didn’t have total control. Then, in 2006, he and the Dolphins were presented the chance to go big and bold, but they were told that Drew Brees had a 25 percent chance of recovering from a traumatic shoulder injury, compared to 75 percent for Daunte Culpepper getting back to form from knee surgery. They chose safer, and wrong. Saban chose Alabama.

Cam Cameron? We’ll turn our thumbs that way on that one. But in 2008, Huizenga though he had his Riley facsimile, in Bill Parcells, a franchise tone-setter in three earlier stops, though some of that was overstated. But Parcells, unlike Riley, didn’t really want to get his hands dirty, other than nonsensically squabbling with Jason Taylor over, of all things, Dancing with the Stars. He was saving those hands for his golf clubs and filling out the daily racing form. Tough. Smart. Disciplined. That’s what was promised. Tony Sparano provided it for a while. But Parcells, given a parachute in that contract, high-tailed it out of town rather than tough it out.

Since? We don’t like to talk about since. Well, the Heat do. The Dolphins don’t. What is there to say? The Dolphins have made some expensive moves (Ndamukong Suh comes to mind) but never the ones at the proper positions that made any sense. They settled at coach. Joe Philbin? Seriously?  They settled at quarterback… for seven years. They settled, settled, settled — as Riley’s Heat stole a generation, of young fans, of license plates, of the spotlight. And they seethed, or at least Ross did, taking not-so-subtle shots at the Heat after LeBron left.

Now, the Heat’s season, a resurgent, exciting one at that, is suspended.

Now, for a weekend, the Dolphins are the only game in town.

But the Heat should still be in their heads. In Ross’s head. In Grier’s head. And, though he’s not responsible for any of the slippage, in Flores’ head.

Get your guy, the quarterback who can be your LeBron, your Wade, your Zo, your Shaq, your Jimmy, instead of being jealous that they all have played on Biscayne. Figure out the rest later. 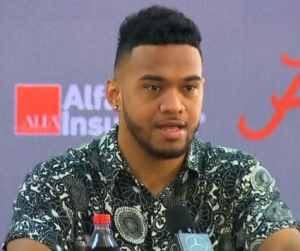 Stop clutching extra picks like precious pearls. They are a means to an end, not the end. And if you need all of them in the future, even with so many already coming your way, that means you probably shouldn’t be in charge. You found Preston Williams without a draft pick, the way the Heat found Kendrick Nunn and Duncan Robinson and so many others. Find some more.

But quarterback? Those are not easy to find. For that, you do whatever is necessary. And more. Always. That’s the lesson since Marino declined and retired.

Don’t wait for the quarterback you want most — whether Joe Burrow or preferably Tua Tagovailoa — to drop to you.

Stop stressing about what happens if you take Tagovailoa — and his special feel, touch and leadership attributes – and his body breaks down as it did for the Crimson Tide.

Instead, consider what happens if you don’t.

The guy who wants to be here, and has made that abundantly clear, when so many players haven’t prioritized this franchise. The guy who was put in the most pressurized situation possible, by Saban of all people, the second half of a national championship game, and delivered the perfect passes to take the title. The guy who played Burrow, in the midst of one of the great statistical seasons in college football history, even while significantly hobbled. The guy who has the charisma to light this place on fire. The guy who can wait behind the ideal bridge, the intellectual and professional Fitzpatrick, unless his body and brain are totally ready. The guy who, over time, could be the Brees, the Russell Wilson for Miami, or maybe for the Patriots, perhaps ushering in another two decades of Dolphins depression.

The guy who could be Wade — whom the Heat drafted at No. 5 even though he had little cartilage left in his knees.

Yes, those knees ached and balked. Maybe even during the parades. 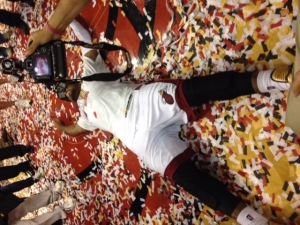 The guy who makes everything right.

Unless there’s a chronic problem with a particular body part, there’s little historical correlation between quarterback availability in college and in the pros. Quarterbacks get hurt. Randomly. Even the strongest. Carson Wentz didn’t have an injury history. He does now. Ryan Tannehill didn’t. Until he did. Brett Favre and Dan Marino struggled at times to stay healthy in college. They were two of the most durable quarterbacks in NFL history. So if the hip checks out, the risk is not to do this.  The opportunity cost would be worth more than the price of the pick. Or multiple picks.

And if it’s Burrow about whom you have the most conviction, so be it. Even if it costs even more. Whatever it costs. The alternative is always irrelevance.

Time, at last, for some Heat.

Ethan J. Skolnick, the CEO of Five Reasons Sports, has covered the Heat, Dolphins and other South Florida teams since 1996. Nearly all of the playoff games he’s covered have been Heat games.
https://www.fivereasonssports.com/wp-content/uploads/Wade-and-UD-scaled.jpg 1707 2560 Ethan Skolnick https://www.fivereasonssports.com/wp-content/uploads/FiveReasonsWebsiteLogo.svg Ethan Skolnick2020-04-21 16:25:102020-04-23 08:16:31Season Ticket: Hey Dolphins… Be the Heat
1 reply

This is the Most Important Dolphins Draft. Ever.
Scroll to top