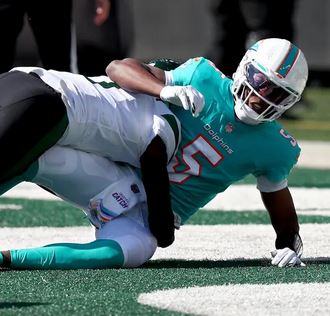 Quick, pass the Scope. This 40-17 debacle Sunday at the Meadowlands has to leave a sour taste in the mouth of everyone with any association or interest in the Miami Dolphins — players, coaches, fans.

That was a game the Dolphins could have and should have won, despite a mountain of adversity that began on their first offensive play when they lost quarterback Teddy Bridgewater to a dubious concussion ruling following a dubious intentional grounding call that spotted the New York Jets a 2-0 lead on a safety.

Yes, it took exactly one play for the NFL’s new amended concussion protocol to open a proverbial can of worms. Ironically, the Dolphins were first to be bitten by it, although those who claimed Miami gamed the previous protocol in handling Tua Tagovailoa’s head knock in Week 3 against the Bills (though the NFL investigation determined they did adhere to procedure) might call it karma.

On Sunday, Bridgewater passed the concussion evaluation but he was prohibited from returning to the game because the ATC spotter in the booth believed he saw the quarterback stumble.

Thus, we had our first brush with the term ataxia, defined as abnormality of balance/stability, motor coordination or dysfunctional speech caused by a neurological issue. That’s the new no-go trigger in the concussion assessment.

With that, the Dolphins were down to their third-string quarterback, rookie seventh-round draft pick Skylar Thompson with nobody else in reserve.

If players are going to be a stumble away from being removed from a game — and this isn’t confined to quarterbacks — then the league is going to need to allow more players to be active or at least available for emergency duty.

Still, the show always must go on, and the Dolphins seemed on their way to adding to an impressive resume of resiliency beginning the fourth quarter — despite also losing their best offensive lineman, left tackle Terron Armstead, and falling into a 12-0 hole.

sauce gardner off the EDGE pic.twitter.com/icpNdggz1z

Having cut the deficit to 19-17, they were driving for a go-ahead score to begin the fourth quarter at the New York 36. Running back Raheem Mostert was chewing up big chunks of yardage on the way to his first 100-yard rushing day as a Dolphin (113 yards, 6.3 yards per carry).

Then a Jets storm surge swept away the Dolphins with 21 unanswered points. Just like that, Miami plunged from first to third in the AFC East, the formerly 3-0 Dolphins reduced to 3-2 with leaks springing every which way.

Perhaps most alarming, superstar receiver Tyreek Hill had his left foot in a walking boot after the game.

Three-time Pro Bowl cornerback Xavien Howard missed the game with a groin injury, and their other star cornerback, Byron Jones, has yet to play this season.

The defense, which was regarded as such a strength of the team that it was kept virtually intact from 2021, has been looking more like unit that struggled the first half of last season than the one that earned that much respect during the second half. The pass rush has been paltry all season and coverage issues were magnified by Howard’s absence.

Next week they face the Vikings and Kirk Cousins, a top-10 quarterback who lit up the Bears on Sunday.

Most notably, the losses the past two weeks have shown how much Tagovailoa means to this offense. That was evident after Bridgewater replaced him against the Bengals. Then Thompson, who gained a cult following with an impressive preseason, demonstrated how different it is for rookie quarterbacks when pressed into emergency service in the regular season.

thompson: "i gave it my all today. i played the hardest i possibly could…i never gave up. that's what i'll hang my hat on…every time i go between the white lines."

When will Tagovailoa return to action? That is the great unknown for a team that has fallen quickly off course.

While Mike McDaniel and his staff have plenty of concerns to deal with this week, it is clear that the hopes for a season that started so promising now hinge on Tagovailoa’s health.