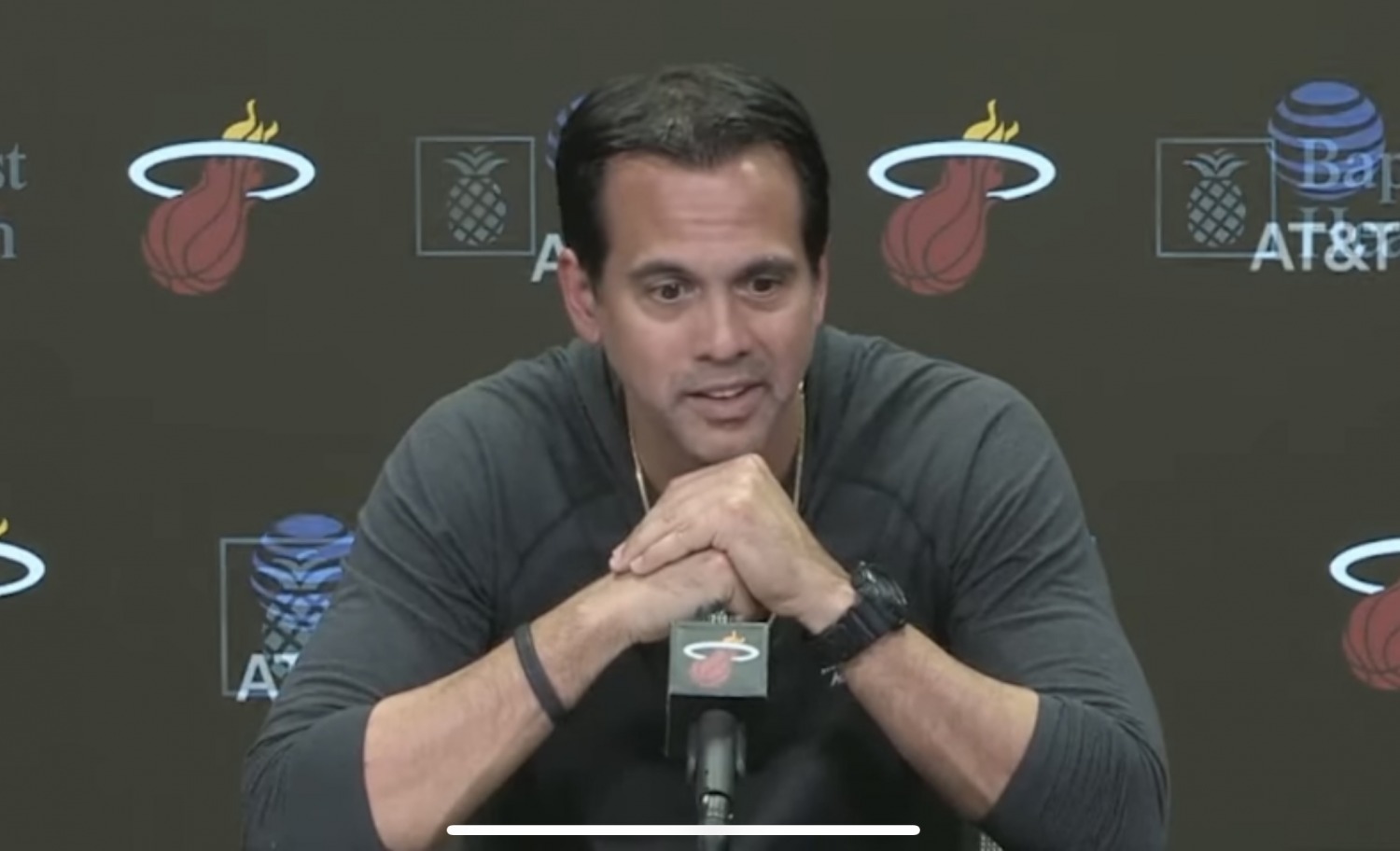 For the first 21 minutes of Sunday’s competitive affair at Miami-Dade Arena, the Heat’s vain play from Friday night continued. As halftime approached, supporters grew anxious as NOLA’s lead ballooned to 16 points.  Then, Miami flipped like a light switch and found a pulse on offense.

In the first quarter, the Pelicans were ravaging the paint, converting easily without all five Heatles getting back on multiple possession changes, and beating the hosts in the half-court.  Jonas Valanciunas overpowered Bam Adebayo and Jimmy Butler in the post, then hit an elbow jumper when #13 sagged off him.

In transition, CJ McCollum used a pick on the left wing to slither to the nail for a jumper in front of Adebayo in drop coverage.  On a broken play with eight seconds left on the shot clock, CJ reset at the top of the key and blew by Victor Oladipo for an unchallenged make at the rim.  Orlando Robinson was the Heat’s closest big man, but he was jammed by Larry Nance Jr’s back screen.

All three of Trey Murphy III’s first-half baskets came on fastbreaks.  As the Heat jogged back, he sprinted hard, running the right and left lanes.

NOLA routinely doubled Butler in the mid-post, a strategy used successfully by the Mavericks on Friday.  Through 24 minutes, Butler had five points, none coming in the half-court.  Ball movement was not up to standards for the sixth straight quarter. And Miami’s marksmen, Gabe Vincent and Max Strus, shot four blanks for the period.

In the last few minutes of the half, Miami scratched its way back with a 10-0 run. Defensively, they strangled NOLA at the point of attack by intercepting a couple of passes, creating its fastbreak chances.  It all started with the charge Lowry drew on Nance in transition.

Herro nailed a triple on the left wing on account of Robinson picking up #14’s first miss from the same spot.  Next, Lowry snatched Herb Jones’ errant pass from the right wing to the other for a break that finished with a soft Oladipo layin.

Dribbling back into Miami territory, McCollum forced a switch against Herro, but Oladipo doubled.  Trying to pass out of the blitz to Jones, Butler deflected the rock, Oladipo recovered it and gave it right back to JB for the layup plus a free throw.

On the next play, Adebayo and Oladipo blitzed McCollum again on the wing.  Both defenders overwhelmed him, and #4 pulled the ball out of his grasp, then hit Herro with a hit-ahead pass he scored on.

In the last 24 minutes, Miami secured the perimeter.  New Orleans converted four out of 16 attempts and committed 12 of its 24 turnovers.  The Heat also found a way to get to the line for 18 of its 27 tries, finishing the night with 22 made freebies.

With three minutes left, the Pelicans were down two points.  Through nine minutes of the fourth quarter, the rivals were shooting 50% from the floor.  Subsequently, Lowry scored the following nine points for the Heat.

The first bucket was a step-back triple on the right wing against Nance in drop coverage.  On the succeeding offensive possession, Jaxson Hayes bit on a fake at the post.  Lowry maneuvered around him for a banker off the glass.  For the third bucket, he took rookie Dyson Daniels off the dribble at the key for a two-foot shot.  His last basket was a pull-up jumper in front of Nance at the elbow.

In a game that both squads combined for 45 turnovers, six Heatles recorded a steal, and they won the points off turnovers battle 15-10.  It’s incomparable to how Dallas smoked them in the same stat, 31-10.

At the postgame presser, coach Erik Spoelstra was humorful about the team’s 21st game decided by five points or fewer.  “Every night.  This is must-see, must-be TV and action live.”

On the topic of vintage Lowry looking for his spots, he praised his QB.  “That last three minutes, he read that intuitively.  Anytime we were trying to make a pass, they were making a deflection or a steal.  It was more get to an action and get a shot on goal.  He’ll felt that.  He understood that…”

It’s a shame no one asked him why Lowry hasn’t recognized those situations for most of the season.

For more insights on the Miami Heat, subscribe to Off the Floor.