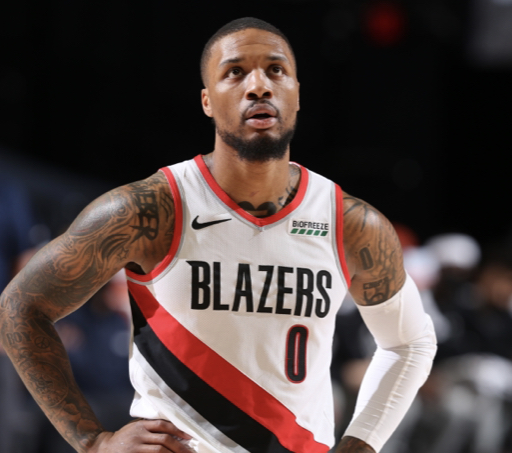 The Portland Trail Blazers are running out of time to turn their season around.  After 42% of the year, they’ve underachieved and sit at eight games below .500. Some of their record can be blamed on the injury report but most of it should be attributed to the poor product the Blazers have put on the court.

Damian Lillard was diagnosed with an abdominal tendinopathy on Dec. 1, causing him to miss the next five games. In that span, Portland went 1-4.  Their only victory came against Detroit, one of two teams with single digit wins.  Yet, Lillard returned 11 days later in the loss at home against the Timberwolves, and it might have been too soon.

Since his return, (8 games) Lillard appears to need more assistance getting open with the help of a screen. Most instances where he zips past a defender have come when he’s running down hill in transition with fewer moments of #0 beating his man in single coverage in the halfcourt.  Whenever Lillard initiates the offense in the halfcourt, Portland’s go-to option as of late is to have a teammate screen for him on either wing so he can pull up for a triple.  It’s becoming as predictable as Julius Randle of the Knicks cutting left.

Another play Portland runs significantly is attack through the pick ‘n’ roll ball handler.  It’s used for 1/5 of their offense but the team isn’t scoring efficiently this way.  Portland is only converting 41.5% of their shots in this category while taking the eighth most attempts in the league.  This could potentially improve with the return of CJ McCollum.   He’s another dependable option to score as the pnr ball handler because of his swift ability to breakaway or stop on a dime.

This season under first-year coach Chauncey Billups, Portland has cut down on its isolation frequency.  In 2021, the Blazers led the NBA in iso usage (10.2%) and now only eight other teams run more one-on-one action.  Portland may have the ball stick less now (7.6), but their effectiveness attacking this way has decreased. While McCollum is out, most of the iso plays are going to Lillard, who has his teammates clear out for a possible lane or for space to take a jumper.  On more occasions, Dame Time is settling for a deep tray instead of blowing past his man.

Defensively, the outfit is the worst team guarding in the NBA.  The Blazers are tied with New Orleans for last in the league in opponent 3-point percentage while also giving up over 48 points a night in their interior.  Much of this is due to poor communication, like not alerting a teammate of an incoming screen, a Blazer failing to inform another he’s switching, or not receiving help when stuck in a mismatch.

As an illustration, on Dec. 21 at New Orleans,Portland put the Pelicans in the bonus less than five minutes into the game.  Some of the penalties came defending a couple fastbreak layups by NOLA’s Josh Hart and Braondon Ingram and another was Jusuf Nurkić losing control on a loose ball.

Then on Dec. 31, Avery Bradley of the Lakers set a screen on Nassir Little on the right wing  anticipating LeBron James’ dive in transition.  James wrapped around the screen and Lillard was left on an island with him on the baseline.  In the moment of truth, Norman Powell did not help from the opposite baseline and instead stayed on Russell Westbrook in the corner. James then powered past Lillard to the basket for two plus the foul.

Four minutes into the same game, James stripped Powell’s right baseline cut and got out in transition after Westbrook flung the loose ball back to start the break.  Here Tony Snell of the Blazers can be seen jogging from the left corner until he reaches his team’s 3-point line.

On Jan. 3, without Lillard (load management) at home, Portland outlasted the Atlanta Hawks, but not without the opposing squad dropping 131 points.  It was the fourth time this season their matchup scored at least 120 points at the Moda Center, but the only instance in which the Blazers won.

Portland’s room for error is shrinking, but they are not out of the playoff hunt yet. Lillard and McCollum as recently as the bubble games showed that they could lead their team to wins at the end in the regular season to secure a final spot.  During that eight game stretch the Blazers finished 6-2.  This time around, performing late season heroics might be very challenging.  Every team is at risk of losing a key because of COVID-19 outbreak.  Missing the right players could derail a season.

Stetson Bennett IV can reach NFL status with a national championship for Ge...
Scroll to top